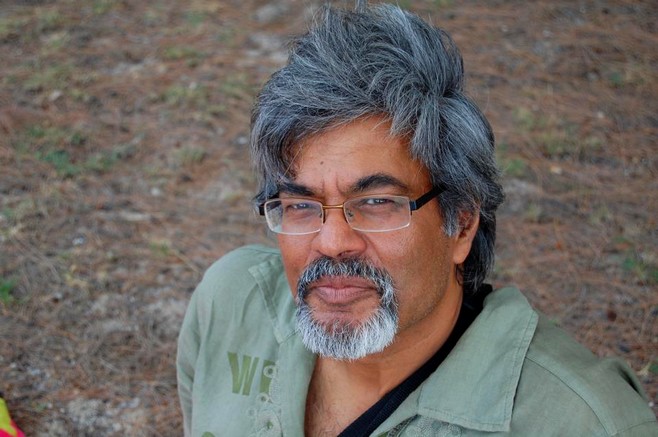 Khal Torabully is a prize-winning writer from Mauritius—an African island nation located in the Indian Ocean, 1200 miles from the continent’s southeastern coast—writing in French and Mauritian Creole, whose work is almost completely unknown in the United States. Torabully is a poet, essayist, film director, and semiologist who has authored some 25 books. Born in 1956, Torabully’s migrant heritage permeates his work, as he gives voice to the millions of men and women, mostly from India and China, who were indentured during the years spanning 1834 to the end of World I. Torabully’s poems transform the unimaginable suffering of these millions of indentured workers, transported from their homelands in former slave ships, to Mauritian sugar cane fields and elsewhere, into a strong and resilient cultural identity through language. Similar to the way in which Aimé Césaire coined the term “négritude,” Torabully revisioned, reimagined, and redefined the derogatory word “coolie” to coin the term “coolitude,” a concept which encompasses the diversity of transcultural exchanges (geographical, biological, and ethnic) that enrich the world. In 2014, UNESCO officially approved the International Indentured Labour Route Project, and Torabully is a key part of this project, offering a new paradigm for the encounter of “memories and imaginaries” (a “poetics of coolitude”) which UNESCO  has recognized as “vectors of peace.”

Torabully has stated that “ordinary language” is not enough when giving voice to history’s indentured workers and their horrendous experiences. His language is playful, inventive, and peppered with Mauritian Creole and neologisms, which makes it especially challenging to translate. The humor of these linguistic acrobatics serves to create a kind of tension that underscores the violence he is describing.