March: And I think of my brother, whose birthday is upcoming: sixty-six. Brilliant, kind beyond measure, forbearance incarnate, M. became ill at age 14 – schizophrenia. I have written here and there about him, always without success. Why this has been so, I’m not sure, for I am not without my memories, especially of those early turbulent days and years. For instance, eight or nine at the time, I recall well my apprehension of that cataclysm’s first rumblings: the so-coded “incident” in his freshman year in high school in which he broke another student’s nose and glasses having taken him for a demon; certain sexually charged pronouncements at the dinner table; and, more nebulous but also more terrible, my parents’ abrupt remove from familiar family rhythms, and when they were among us (remember, in the early Sixties the culpable agents still were Mother and Father – especially the former — not for their genetics but their malevolent or neglectful parenting) the guilt-ridden, the bewildered terror in their eyes. (As I write tonight, the boy I was is sitting on the porch steps just after that “incident” and its resulting trip to the emergency room – there was no other place; overhearing through the opened living room windows his weeping mother’s conversation with our parish priest, in the course of which she selects the word “monster” to describe her eldest son, along with the patented “Jekll and Hyde,” while confessing that she has had to look up the word “schizophrenia” in the dictionary.)

But to re-cast that experience as poetry – no, that has eluded me.

I do, as well, of course, retain vivid images of what ensued, as I grew older: the toll extorted by the standard courses of treatment then available: the grotesqueries of ECT combined with successive waves of Thorazine and Haldol, interments in what can only be called asylums, so abysmal as to humble the imagination. Along with these predations, too, was something even more scarifying, the implicit understanding that M. knew he was profoundly, incorrigibly ill; his madness’s cruelty effectively doubled, for interludes of “normalcy,” if infrequent, did present themselves, serving as reminders, as if he needed them, of all that had been lost, all that would never truly return. For a day or even a week, he suddenly would be “the old M.” whereupon we would treat him as such, as if the nightmare had never shaken him from his bed. Such days! Gratitude, for us – diluted, yes, by the certainty of how they would end, but gratitude all the same. And for him? One thinks of Cioran’s observation: “The premonition [or self-recognition] of madness is complicated by the fear of lucidity in madness, the fear of the moments of return and reunion…one would welcome chaos if one were not afraid of lights in it.”

And yet. Salvation, no not that, but the grace, the unshakable will to go on, to not succumb to the hallucinatory castigations and suicidal urgings whose ventriloquisms he named the Devil: these never did depart, and have not to this moment. It – this salvation’s — source? Primarily faith. The promise of divine recompense for suffering undertaken in Christian obedience to God’s will. But there were also certain…emollients: work (always manual, for which he was and is spectacularly ill-suited), routine, music, painting, and, most constantly, chess. A brief testament to the quality of his mind: in the maelstrom of the disease’s early manifestations, between those electro-shock treatments and nearly zombified under the spell of the early anti-psychotics of which the above-mentioned were only the beginning, at 14 M. was the Junior Chess Champion of the State of Kentucky, at 15 a Master class player who regularly competed in tournaments and exhibitions in our and surrounding states, to which my father would shuttle him on weekend “sign-out” excursions from one hospital or another. In fact, perhaps my most cogent memory of my older brother is not of him but this book, by Edward Lasker, that never seemed to be far out of his reach as he huddled over a board (mini, magnetized, five-and-dime, vinyl roll-up, “regulation”):

Did I acquire from him a love of the game, myself? Not really. Did M. try to interest me in it? Yes. Although he knew me, too, as he knew himself so well, and didn’t push it too hard. Oh, I read with passing curiosity the chess columns in the local paper, occasionally joined in a match or two as I tagged along with him and my father to meetings of the Louisville Chess Club – down a long fluorescent hallway in the upper reaches of The Shelbyville Road Mall, behind a heavy metal door that when heaved open revealed a quorum the likes of which wouldn’t have been out of place in an opium den: ragged college professors, toe-tapping wraiths, pale and haunted-eyed misfits of every stripe (not a single woman); the whole room enveloped in a pungent fog of pipe-smoke and silent but for the ticking of the twinned time-clocks and the staccato rhythms of the flattened palms that assaulted them with a uniform if unexpected ferocity. But, perhaps not unsurprisingly! to no avail: A half a dozen forays in which I was dispensed with in not many more moves by some patzer deigning to play me comprised the whole of my chess career.

And so, you wonder, Why is he telling me this? Again, I’m not sure. That impending birthday. A recent visit home, where ghosts always linger. But more likely the reason can be traced to this month’s cover art, Alex Hooks’ “The Weiqui Players.” Alex, the son of a colleague, and an artist whose work has always fascinated me. I ran across the piece perhaps a decade ago, and only recently have I had occasion to see it again. The connection to M. was as obvious as it was instantaneous – the posture, the studied elegance — of the players and the game. Look carefully: and for that lounging figure substitute an empty space –after he ventured into adulthood M. rarely played socially, preferring instead the solitary opponent of his projected thoughts, an allegory of the trajectory of his illness. Indeed, for a short time, tiring of chess (or perhaps cognizant of its relative lack of complexity, such was his intellect) M. did take up Go, the more recognizable name of Weiqui. I think there is a bowl of stones at my mother’s house from which an artificial orchid rises; the board long ago discarded, probably.

In any event, whatever its impetus, and not wishing to intrude further on your thoughts than I have already, and for which I apologize, so concludes this brief epistle on the matter of chess (and peripherally Weiqui); its intertwining with my brother’s travails (much too paltry a word, I know) and his perseverance in the face of them, surpassing understanding.

Happy Birthday, M. – you who are not aware of this journal’s existence much less ever will read these words; génie foudroyé, mute orator of your God’s intemperate ramblings, adumbral presence of my childhood and unknowable unreachable angel these many years.

Now, then, ahem: this month’s news, mostly concerning the launch of Plume Poetry V 4 and various readings in support of its launch. A peek at the almost-complete cover, designed by Marc Vincenz: 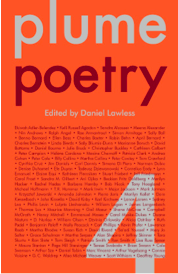 Last month I had the pleasure of announcing the addition to Plume’s staff of the remarkable Hélène Cardona, as Co-International Editor (with Marc Vincenz). And what a fine “hire” (though I’m pretty sure that term implies financial recompense, so…) that has turned out to be! For not only is Hélène working on her first Featured Selection (TBA), but has organized a reading exclusively marking the launch of the print Plume Anthology of Poetry V4, and it’s one of the better ones at AWP , I think. So:

The roster stands as it stands now – stellar:

Hélène Cardona will emcee the event.

There will be a second reading in which Plume will participate with MadHat Press and White Pine Press:

(At the corner with S Grand Avenue, only a few blocks from most hotels, the Marriott and the Convention Center.)

Readers there will include

Non/AWP readings as of now are as follows:

Current US poet Laureate Juan Felipe Herrera will be the sole reader.

Terese Svoboda will be the featured reader.

Notice of other readings soon to arrive.

And: Our Featured Selection this month is from Cindy Cruz – definitely not to be missed. A revelatory introductory interview conducted by Associate Editor Nancy Mitchell.

Shall I remind you, again, to subscribe to our Newsletter? I shall.   As there, every month, aside from bits of business and upcoming Plume-related events, you will find a “secret poem” introduced by some luminary or other. This month Kelli Russell Agadon does the honors. Her selected poem: Linda Pastan’s “Why Are Your Poems So Dark?” I think this one answers the question for a lot of us, as it does for the essayist, who writes our words, too.

As noted, our cover art this month comes from Alex Hooks. Mr. Hooks is a librarian at Gulfport Public Library in Florida. When not working he continues to experiment with visual arts, writing, and music.

Nota bene: as was the case last issue, New Work Received this month will not appear as usual in this space given the number of poets who have sent work for the print anthology and our online iteration – a great kindness for which I remain grateful. Though I can say Chard deNiord, Kathleen Driscoll,  and Jean Valentine are among them…

As always, I hope you enjoy the issue!

Frannie Lindsay’s fifth volume, If Mercy, was released by The Word Works in 2016. Her work appears in Best…

PLUME Charalampos Kydonakis from the series oNCe February, 2020 Welcome to Plume Issue # 102 — February: and I want to confess…