This month, with much to mourn, I happily cede this space to Chard deNiord’s remembrance of Tom Lux. Tom was going to read for us at AWP, before, well. I spoke at some length to Chard over those few days, learned of his long friendship with Tom, and discovered he had an essay we might publish – and here is its. (Next month we will have another of Chard’s essays in our Essays & Comment column, on the state of contemporary poetry.) 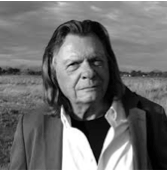 On the Passing of Thomas Lux

I’m not sure how to sum up the vital career and life of Thomas Lux. He was, as Stanley Kunitz noted, “sui generis, his own kind of poet, unlike any of the fashions of his time.” And he was the same unique presence as an individual. Pathos, humor, realism, and joy flowed from his pen and voice alike with a double-edged expression that sliced with both Swiftian wit and compassionate attention.

Tom was equally adroit in assaying the history behind history and the paradisiacal minutiae of his boyhood “fern hill” in Easthampton, Massachusetts. His alternating poetic current of historical and personal musing testified, without the slightest flickering throughout his forty-five year career, to his deeply affectionate engagement with the world as an only son, father, husband, citizen, historian, surrealist/realist, and satirist. “It’s difficult not to write satire,” he quotes Juvenal in his poem “Praisegod Barebones”, and then with a haunting intimation concludes,

Look it up, you can do that easy now…

who is gone now, absorbed

into PGBB, who is like a good verb that absorbs,

These lines function as both a self-elegy and an apologia pro vita sua. Indeed, his made-up risible name, “Praisegod Barebones” resonates as “a good verb”, transitive in its poetic transmission. In poem after poem, just as in life, his personality and inspiration emanated from the same large, hilarious, original heart.

The only son of a milkman and telephone operator for Sears Roebuck, Tom remained closer to his humble, rural background than to the Klieg Lights of his well-deserved fame and notoriety. Although he garnered many awards, including a Guggenheim Fellowship, The Kingsley Tufts Award, and several NEA Fellowships, he viewed his family, friends, and fellow poets, especially struggling poets, his greatest prizes. His love for his daughter, Claudia, and his wife, Jennifer, transcended his love for himself. But he was never sappy in either his outward show of emotion or his love poems, often, in fact, preferring ironic toughness to convey his most endearing sentiments, as in his poem “A Little Tooth”:

Your baby grows a tooth, then two,

And four, and five, then she want some meat

directly from the bone. It’s all

in love with cretins, dolts, a sweet

talker on his way to jail, And you,

your wife. Get old, flyblown, and rue

nothing. You did, you loved, your feet

Nature and human nature complement each other in Tom’s poems in strange ecstatic conceits that make highly charged, immediate sense. Few other American poets have effected such moving intimate subject matter amidst the wild “twiggy stuff of bushes” (William Carlos Williams’ phrase for natural imagery). Yet, grounding realities emanate consistently from Tom’s poems, infusing them with mimetic complexity in which one sees herself in both nature and herself. Their strangeness entertains and enlightens simultaneously, turning familiar at lightning speed as ingenious tropes, as in this short lyric, “A Kiss”:

hand-hauled, mineral, cool, could be

a kiss, or pastures

fiery green after rain, before

the grazers. The kiss — like a shoal of fish whipped

of a million monkeys — the kiss

carry me — closer than your carotid artery — to you.

But perhaps the most striking quality in Tom’s poetry is his witness to the bittersweet in which he stares down the dark “island” of mortality one minute in such lines as these lines from “History Island”:

The whole island is an underlit room.

you’re in it now.

We’re all in it now, and an eight inch bucksaw

then celebrates the beatitude of love the next:

Love is like this at the bone, we hope, love

(from “I Love You Sweatheart”)

Tom’s range was as wide as human experience itself. Not since James Wright has a poet written with such naked, wise, entertaining feeling and gotten away with it. As in so many poems of Tom’s, he heard a clear “other” voice that was also his voice, speaking to him. He called it, “the voice you hear when you read silently.” It is “the clearest voice,” he declares. “You speak it speaking to you.” Which he did as a “local” mystic with a hypostatic voice.

From the start of his career with the publication of Memory’s Hand Grenade in 1972, Tom has appealed to a wide spectrum of readers, from the blue-collar mill workers and farmers he grew up with to his students and fellow poets. In the words of Walt Whitman, one of Tom’s favorite poets, if not his favorite, he “was large, [he] contained multitudes.” And he was filled with joy also, quoting Whitman himself in an epigraph to his book Child Made of Sand: “Joy, shipmate, joy!”

In thinking back on the memorable things Tom said on the spur of the moment, I recall one beautifully sensible comment he made regarding death during a visit to one of my classes. He had just read a particularly dark poem—I think it may have been “Snake Lake”—prompting a student to ask him what his thoughts were about death. He responded with stunningly sensible wit, “Death is part of life. So how bad can it be?” And then he smiled.

Tom was continually thankful for his life. I don’t think he ever felt he deserved the fame he achieved. Others were his first concern, whether family, friends, or strangers in need. In the midst of his battle with cancer last fall, he made a point of commenting to his friends and editor that his task of editing and writing the introduction for Bill Knott’s selected poems, which is scheduled to be published this year by Farrar Giroux Strauss, was his “most important work”.

Tom’s muse witnessed to him as much as he witnessed to her as the playful, moving, irreverent, dark, ecstatic, wild, genuine, original, sagacious, and grateful force she was. “Lord Whoever, thank you,” he wrote with characteristic irreverent reverence in his poem “Poem of Thanks”, enumerating particular things that cried out to him as synecdoches for the myriad things, both animate and inanimate, he wished to thank as vital extensions of his own life:

I’m about to in– and exhale, this hutch

in the woods, the wood for fire,

the light–both lamp and the natural stuff,

of leaf-black fern, and wing.

For the piano, the shovel

Thank you, Lord for

to carry me here–where I’ll gnash

it out Lord, where I’ll calm

and work, Lord, thank you

for the goddamned birds singing.

I didn’t get a chance to say goodbye to Tom. He maintained a stalwart privacy in his last days, as if he didn’t want to trouble his friends with the one thing he couldn’t beat or woo or transform with his verbal magic. But he had intimations of his final days. This last stanza of “Baby Madsong” (a title that captures his perennial boyishness and love for children) from his 2012 book Child Made of Sand, which he dedicated to his beloved wife Jenny, anticipates his graceful vision of slipping away:

Walk down the river and get in the boat.

the river takes you where you want to go.

Brian Culhane on “The Immortality Ode” Often, I turn to solo piano music for inspiration, with the great Bill Evans…

February: yes, readers, the shortest month, and in acknowledgment of or rather aligning with such I want to offer today…