And as an amuse-bouche, we begin the Newsletter — though the meal will not be so grand — with a piece from Barthes: a poem — that is truly its essence — that once again proves as if it needed verification that he was a marvelous writer — aside from anything and everything else. It’s from Roland Barthes by Roland Barthes, translated by the peerless Richard Howard, published by Hill and Wang/FSG in 1977:

Here is what I did with my body one day:
At Leysin, in 1945, in order to perform an extrapleural pneumothorax operation, a piece of one of my ribs was removed, and subsequently given back to me, quite formally, wrapped up in a piece of medical gauze, (the physicians, who were Swiss, as it happened, thereby professed that my body belongs to me, in whatever dismembered state they restored it to me: I am the owner of my bones, in life as in death.) For a long time I kept this fragment of myself in a drawer, a kind of body penis analogous to the end of a rib chop, not quite knowing what to do with it, not daring to get rid of it lest I do some harm to my person, though it was utterly useless to me shut up in a desk among such “precious” objects as old keys, a schoolboy report card, my grandmother B’s mother-of-pearl dance program and pink taffeta card case. And then, one day, realizing that the function of any drawer is to ease, to acclimate the death of objects by causing them to pass through a sort of pious site, a dusty chapel where, in the guise of keeping them alive, we allow them a decent interval of dim agony, but not going so far as to dare cast this part of myself into the common refuse bin of my building, I flung the rib chop and its gauze from my balcony, as if I were romantically scattering my own ashes, into the rue Servandoni, where some dog could come and sniff them out.

I don’t know of many prose poems that are its equal.

But: to Plume news.

First, of course: On to Seattle!
Here is the lineup for Plume’s Friday evening reading — in conjunction with our new publisher Madhat: impressive, if I can say itâ€¦

The reading will be held at Tap House Grill, 1506 6th Ave, with the Plume poets reading from — approximately, 7:00 — 8:00 p.m. Many thanks for the tireless efforts of Jonathan Penton, Marc Vincenz, and Alex Cigale 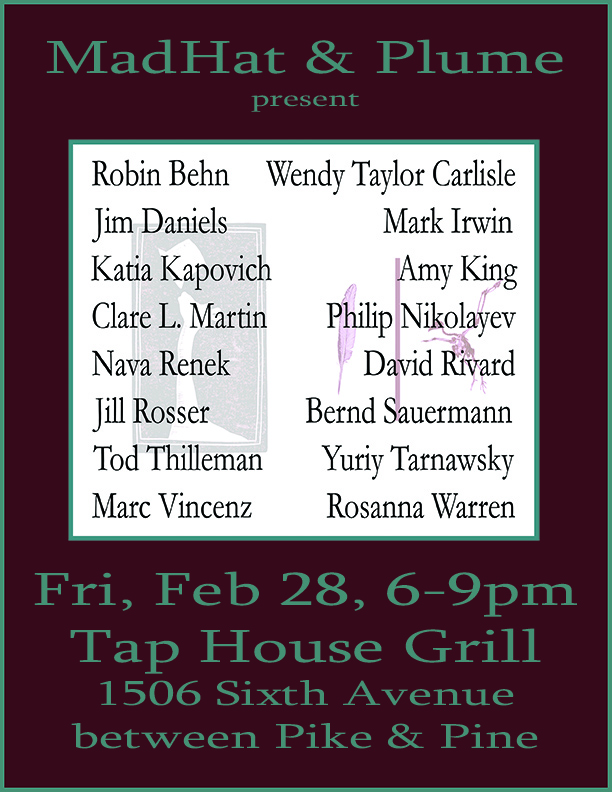 Please, too, stop by MadHat’s/Plume’s bookfair table J19.  I have just received an advance copy of the print Plume Anthology of Poetry 2013 — and it isâ€¦marvelous. The cover art alone is worth — well, not really, but it’s fine — the price ($19.95): a photograph from Laurie Simmons that: well, see for yourself. Preface by Linda Pastan, an extended Feature Section with poems by the great Karl Krolow, translated by Stuart Friebert. And comprising new work from Meena Alexander, Dick Allen, Nathalie Anderson, Nin Andrews, Rae Armantrout, Gennady Aygiâ€¦ and that’s just the A’s. Many thanks again to Jonathan, Marc, and Alex.

Oh, and â€¦a bit of favor-asking: one, if you are on Facebook, or Twitter, and like a particular poem very much: share, retweet. The best way for Plume to grow is as with everything, word of mouth.

Also, though our reading circulations remains quite good at 8000-8500 each month:
Nota Bene: Unfortunately, Plume is not getting through to many of our Facebook followers. There is a reason for this. Facebook has changed the way you receive updates from the Pages you have Liked. If you want to receive daily updates from Plume you will need to simply go to our page, hover your cursor over the word “Liked” up at the top and then click “Get Notifications” once the Get Notifications option pops up.

Yes, and these items of interest, too, for those who like me tend to glide by the Editor’s Note without a glance:

Our cover art this month, “My Leaner Meaner Me” comes from the many-talented Steven Bradbury: poet, paint, translator extraordinaire of the great Hsia Yu, whose work has appeared several times in our both our online pages and in the print anthologies.

Next up, after this issue’s Featured Selection by Martha Collins, a dazzling project from Hank Lazer. Several more features are in the pipeline, as has been noted.  (Here, too, again, let me add as always: those with projects that might be suitable for the Featured Selection, please do contact us with your proposal at plumepoetry@gmail.com )

A new reading has been added to the list of upcoming events in Seattle, NYC, Cambridge (with Chicago in the works): New Orleans, with Peter Cooley leading the way. More information as this comes together.

On the off-chance that you, poets, are interested in reading at one of the above sites, or might want to organize a reading in your own neighborhood, please, again, email me at plumepoetry@gmail.com — we’ll make every effort to accommodate you, I promise.

For new work received this month, I’m afraid you’ll have to look at that Editor’s Note: I must leave something to — incentivize, yes that’s the word au courant.

Finally, February reading recommendations from our own David Cudar:
What I Had Before I Had You by Sarah Cornwell
Cornwell’s debut novel contains a convoluted family narrative. First novels rarely unflinchingly admit the delicate subject of mental illness. There is at least the promise of hope – for a first novel, its subject matter is quite mature

Enon by Paul Hardy
Hardy has the skills of seasoned writing; although he has only two novels to his credit, his style is lucid but mythic, dark and intoxicating. His first novel, Tinkers, won the Pulitzer. At this rate, we can expect great things from him because Hardy possesses that rare gift of making words do his bidding precisely and astonishingly.

Death of the Black-Haired Girl by Robert Stone
Stone is one of those writers who, though gifted, has been unable to move to top tier and is considered “middle-brow” to most.  This book may not change this fact, but it should.  A smartly written, tightly plotted novel, Stone has languished in the shadows long enough (though his sales have never suffered for this fact). Perhaps this book will grant him the light he deserves.

Report from the Interior by Paul Auster
Auster struggles to be a personally transparent his Winter Journal. His writing continues to improve, and as it does, so does his search for his elusive self. He attempts to be both Beckett and Proust: writing a monograph about himself and the structure of memory.

This Is the Story of a Happy Marriage by Ann Patchett
A first-rate essayist, Patchatt, blends narrative and memoir.  Her phrases and stories are so convincing the reader feels as if she is along for a ride with a best friend, who is telling her wonderful stories about dogs and bookstores, first and second marriages.  This book echoes with the truth.

Ignorance: How it Drives Science by Stuart Firestein
Firestein turns the scientific model on its head, making “smart’ ignorance — not knowledge — the primary force behind advancement of science: an experiment is tried over and over until the correct combination of elements is discovered. It is a fascinating book —in some way it feels like reading the other team’s play book.
As always, I do hope you enjoy the issue.

PLUME Lorna Simpson, “Easy to Remember” October, 2020 Welcome to Plume Issue # 110 — October: and I hope this finds you…

NM:    Hi Cindy. I don’t want to spoil our readers’ pleasure in your graceful and convincing argument that Marguerite…

Readers:  Welcome to Plume, Issue 84 July: and taking my cue from the poem below: one can imagine a parlor game (or…