In this month’s installment, reviews editor Adam Tavel examines an iconic volume of Polish war poems in a new translation. 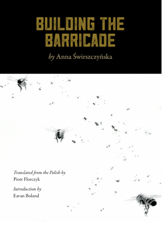 The narratives of horror and depravity that emerged from World War II remain impossible to tally, defying hyperbole even seven decades later. While most American readers are familiar with the Normandy invasion and siege of Stalingrad, few may know the tale of the Warsaw Uprising, which lasted for sixty-three days when the Polish resistance Home Army, outmanned and outgunned, repelled German forces and waited desperately for Russian reinforcements that never came. The outcome was appalling: a quarter-million Polish casualties, the shame of surrender, and the near-destruction of a robust and cultured city. Though poet Anna Świrszczyńska served as a nurse during the uprising, her brutal record of the ordeal wasn’t published until 1974, and has never been fully available in English until now. Piotr Florczyk’s deft bilingual edition of Building the Barricade honors the unrelenting carnage of Świrszczyńska’s bold chronicle, rooted in her character studies and understatement, and reminds us of poetry’s elemental urge to sing against chaos.

Building the Barricade is an unrelenting catalog of death, so even though Świrszczyńska acknowledges that her friends gave their lives for a hopeless cause, her call to witness honors their courage and dignity. In “Hair like a Waterfall,” we encounter a hospital scene dominated by “the smell of pus, the moans of the wounded,” and the writhing agony of amputees. By the poem’s end, even the hospital itself ceases to exist, having been blown to smithereens. In “I Carried Bedpans,” another nursing poem, Świrszczyńska’s closing lines tersely capture the book’s guiding impetus: “When the world was dying,/I was but two hands, handing/the wounded a bedpan.” Elsewhere, the imagery of destruction simply overwhelms. Her brief poem “After an Air Raid” follows below in its entirety:

Out of a pile of broken walls
sticks skyward
gray as a wall
a hand with five fingers.

Read in context, the arresting detail here is not the fallen building, nor the corpse, but the hand that somehow arrived at death intact with all its fingers. “They Thought I Died” is equally gruesome, as the speaker’s compatriots mistakenly assume she’s been killed when they discover a lookalike corpse in the street. Though the living reunite and flee the firefight, “what was left was the body,/somewhat similar to mine,/no longer afraid of bullets.” Like the work of Charles Reznikoff, Building the Barricade values reportage over rhetoric, but “Beauty Dies,” one of Świrszczyńska’s most compelling poems, functions as an ars poetica championing the artistic impulse even when failure is a foregone conclusion:

The museum is burning. Like hay
the beauty worshipped by generations of men
is burning.
It’s priceless
like the body of a man.

A man, who’s lived in the world
only to guard the museum,
managed to show up on time.

If he survives, he’ll confirm
for future generations
how beauty was dying like beauty
in flames.

Equally wrenching are Świrszczyńska’s character studies, which offer individual and collective portraits of the uprising at the ground level. “While Building the Barricade,” an early standout, rejects the grandeur of heroism in favor of the fearful resolve common Poles mustered, even though they faced annihilation:

Indeed, Świrszczyńska’s poems attest that those who showed the greatest valor before the Nazi threat were from the lowest rung of society, and as such, their familiarity with sacrifice made them better equipped for the ghastliness of guerilla warfare. “A Messenger” follows a courier girl who has “unlearned to eat and sleep./Her body/is the only eyes.” “Lives One More Hour,” one of the collection’s most devastating poems, details how a mother crawled “on her stomach/among rubble, mud, corpses” for “three spoons of milk,” which only marginally extends the life of her starving child. “Conversation through the Door” recounts how the speaker beseeched the terrified parents of a dying soldier to visit him, only to have them refuse out of sheer terror. All they can bring themselves to do is send a bottle of wine, and when the speaker—presumably Świrszczyńska herself—turns to leave, “behind the door/the wife begins to scream/as if she were in labor.” One of the signature accomplishments of Building the Barricade is that Świrszczyńska refuses to reduce the Nazis laying siege to Warsaw to jackboot stereotypes or witless automatons. Perhaps the book’s most uncomfortable truth is that the men who commit unspeakably atrocities remain all too human, as we see in the gritty terseness of “A German Soldier”:

Tonight you cried in your sleep,
you dreamed about your children
in a distant city.

You got up in the morning, put on a uniform, a helmet,
a machine-gun over your shoulder.

You went to throw in the fire alive
children of others.

Translator Piotr Florczyk masterfully renders Świrszczyńska’s brevity and understatement, so decades later, her poems still enact the numbing, fragmentary, and violent spirit of war in contemporary English. Most poems in Building the Barricade run shorter than thirty lines, few stretch beyond a single page, and many embody the Imagist impulse in a single stanza. In merely seven lines, “Night Shift” captures the ominous ambiance of a warzone’s city block:

On an August night she leaned
out of the window of a dark hospital room
felt on her young hair near the temples
August wind.

And the brush of shrapnel
that hissed
splashing in the puddle below.

Coming halfway through the book, the poem bears no obligation to describe the hellish hospital scene—its litany of suffering and waning supplies—but simply allows the compounding carnage readers have already encountered to paint in those missing details. Initially, the nurse’s exhaustion and need for air, coupled with the soft diction of the first stanza (“young,” “hair,” “temples”), prepares us for a vignette of transitory relief. The stanza break that follows might as well be a chasm, however, for there is no relief in the “brush of shrapnel” that nearly scalps our nurse before it sizzles in the muck. Evocative due to its concision, vividness, and pacing, “Night Shift” is a fitting example of Florczyk’s clean and unobtrusive touch. “Waiting before the Firing Squad,” a radically different piece, presents Świrszczyńska’s closest brush with martyrdom:

My fear grows more powerful
with every second
I am powerful
like a second of fear
I am a universe of fear
I am
the universe.

Now when
I stand against the wall
and don’t know whether to close my eyes
or not to close.

Now when
I stand against the wall, waiting for the firing squad.

The poem’s haphazard, uneven lines and use of the present tense grant it a breathless stream-of-consciousness, capturing the utter panic of the scene it depicts. Moreover, the second and third stanzas are grammatical fragments, which heighten the sense of dread and unresolved tension. While the reader takes some small comfort in the literal absence of death at the end— Świrszczyńska survived to write this autobiographical poem, after all—the greater epiphany is that the Poles who survived the Warsaw Uprising were never the same again, having endured so much savagery and slaughter. Much like Frodo clutching his scar from a Morgul blade, Świrszczyńska seems to admit to herself in the closing couplet that the firing squad succeeded in killing a part of her after all.

For all of its desolation, Building the Barricade affirms the poet’s moral imperative to document and defy the very bleakness that would swallow her whole. For three generations now, the grim brilliance guiding Świrszczyńska’s war poetry has served as a miraculous testament to her bravery and the bravery of those Poles who fought against insurmountable odds to defend their county and the sanctity of human life. For the American reader, this new translation from Tavern Books could not arrive at a more vital time. In our age of Trumpism, climate change denial, and civil war in Syria—which has now claimed a half-million lives while displacing millions more—it is easy to lose hope and dismiss poetry as an impotent luxury. Building the Barricade is a painful yet valiant reminder that no scribe aligned with justice writes in vain.

Jonathan Taylor is an author, editor, critic and lecturer. His books include the novel Melissa (Salt, 2015), the memoir Take Me Home (Granta, 2007), and the poetry collection Musicolepsy (Shoestring, 2013). He is director of the MA in Creative Writing at the University of Leicester. His website is www.jonathanptaylor.co.uk.”

Undelivered letter from the Rev. Charles Smale to The Times, 1874 | Xiuhmolpilli, or The Binding of the Years, November 1507*