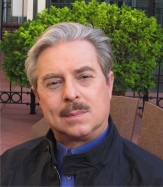 Nicholas Christopher is the author of fourteen books: five novels and eight books of poetry including Crossing the Equator: New & Selected Poems, 1972-2004; and a nonfiction book, Somewhere in the Night: Film Noir & the American City. He has also edited two anthologies of contemporary American poetry, Under 35: The New Generation of American Poets, and Walk on the Wild Side: Urban American Poetry Since 1975, and translated several modern Greek poets, including George Seferis and Yannis Ritsos. His work has been widely translated and published abroad, and he has appeared in numerous anthologies and magazines, including The New Yorker, Esquire, The New Republic, The Paris Review, The Nation, and The New York Review of Books. He is currently at work on three books, to be published in 2011-12: Tiger Rag, a novel; On Jupiter Place, a new poetry collection; and The True Adventures of Nicolò Zen, a children’s novel.

Sorry, there are no posts to display.