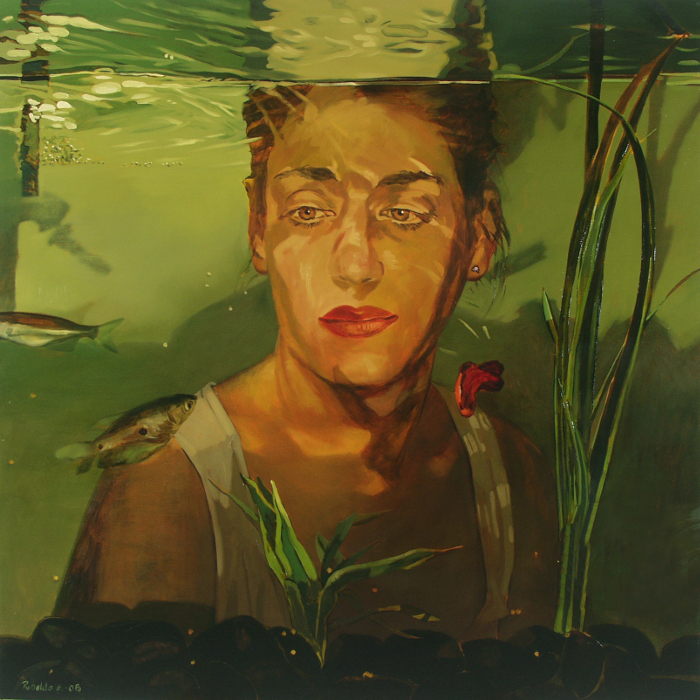 after the painting “Thetis (Aquarium)” by Robaldo Rodríguez

We see her through her element, not

in it, a face of harvest and sand gazing

upon a crypt of waters, fish jotting

the tight firmament.  The water bends

her to fill this pane and tints her face

into nature.  She ignores these mere effects,

dragged inward by the pull of another tide,

welcoming the nobody she finds there at rest,

as a creature of bright scales finds respite

in crevices where her lights are blind.

Glints weave paths across the face and tank

to mark the painting’s solitary and troubled link

to the instant, for a goddess needs no shield from time.

Her son, it’s true, has cast his fate with might.

Ricardo Pau-Llosa‘s 8th book of poems, The Turning (2018) is from his longtime publisher, Carnegie Mellon U Press. He is also an art critic and curator.  Birmingham Poetry Review will be publishing an interview with him soon.

Confusing Myself with the Whippoorwill

Ricardo Pau-Llosa
The storm dissolves the difference between wave,

Ricardo Pau-Llosa
My housekeeper had the dishes brought

Ricardo Pau-Llosa
Probes on TV tell the tale of their