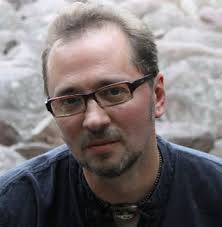 Vadim Mesyats  studied physics at Tomsk State University. In 1993 he emigrated to the USA, and worked for Stevens College in New Jersey as a coordinator of the Russian/American cultural program. The original of the poem appearing here was first published in Novii Mir. Guest in the Homeland(Talisman House, 1997) is his early Selected in English. He was short-listed for the Russian Booker Prize in 2002, for his novel Treatment by Electricity, and is the publisher of Russian Gulliver press.