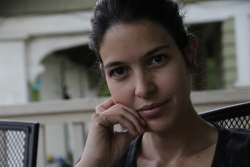 Flávia Rocha is a Brazilian poet, editor and journalist. She is the author of three poetry books: A Casa Azul ao Meio-dia (2005) and Quartos Habitáveis (2011) and Um País (2015), all published in Brazil. She holds an M.F.A. in Writing from Columbia University, and for 13 years was an editor, then editor-in-chief for Rattapallax, a literary magazine featuring contemporary American and International poetry. She co-wrote the screenplay of Birds of Neptune, an independent feature film by Steven Richter that premiered at the Slamdance Film Festival this year and won Best Dramatic Feature at the Arizona International Film Festival 2015.