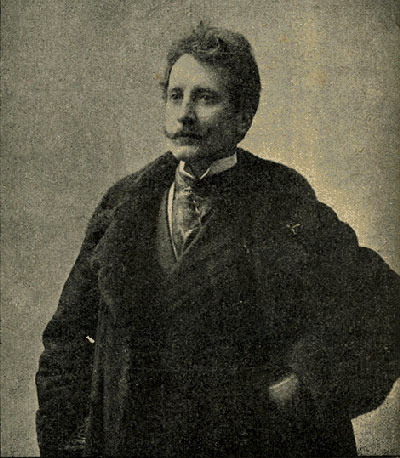 Georges Rodenbach was born in Tournai, Belgium but spent his early years in the Flemish city of Ghent and later Paris, where, like his childhood friend and compatriot Emile Verhaeren, he rubbed shoulders with all the main players of the French symbolist movement. Rodenbach’s name is forever associated with Bruges, the location for his most celebrated and enduring work, the poetic novel ‘Bruges-la-Morte’ (1892). He also wrote a number of collections of poetry of which ‘Le Règne du silence’ from 1891 in many ways prefigures Bruges-La-Morte. A further novel ‘Le Carilloneur’ (1897) is also set in Bruges. Several books of short stories, prose poems, and a range of essays on such diverse figures as Rodin, Monet, Huysmans, Verlaine and Mallarmé attest to a prodigious literary talent. Rodenbach was a typical artist of the decadent period, unfailingly anti-bourgeois, solitary, an aesthete suffering some undisclosed malady of the spirit, the victim of a palpable sense of ennui or ‘spleen’. But Rodenbach was very much a modern, tenacious poet too and was not merely concerned with the decadent indulgences and literary frivolities of many of his peers. His precise, poignant, delicate, yet deceptively existentially muscular poems still promise much to the modern reader, despite the fact that they have suffered woeful neglect in English translation.