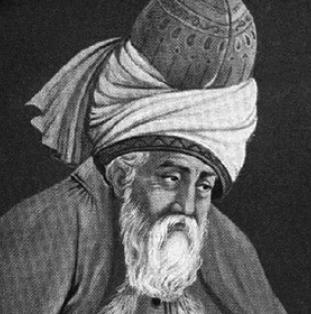 Mowlānā Jalāloddin Balkhi, known in Persia as Jalāl ad-Dīn Muhammad Balkhī and in the West as Rumi, was born on September 30, 1207 C. E. in Balkh Province, Afghanistan, on the eastern edge of the Persian Empire. Rumi descended from a long line of Islamic jurists, theologians, and mystics, including his father, who was known by followers of Rumi as “Sultan of the Scholars.”

As a teenager, Rumi was recognized as a great spirit by the poet and teacher Fariduddin Attar, who gave him a copy of his own Ilahinama (The Book of God). When his father died in 1231, Rumi became head of the madrasah, or spiritual learning community.

For the last twelve years of his life, beginning in 1262, Rumi dictated a single, six-volume poem to his scribe, Husam Chelebi. The resulting masterwork, the Masnavi-ye Ma’navi (Spiritual Verses), consists of sixty-four thousand lines, and is considered Rumi’s most personal work of spiritual teaching. Rumi described the Masnavi as “the roots of the roots of the roots of the (Islamic) Religion,” and the text has come to be regarded by some Sufis as the Persian-language Koran.

In his introduction to an English edition of Spiritual Verses, translator Alan Williams wrote: “Rumi is both a poet and a mystic, but he is a teacher first, trying to communicate what he knows to his audience. Like all good teachers, he trusts that ultimately, when the means to go any further fail him and his voice falls silent, his students will have learnt to understand on their own.”

Rumi fell ill and died on December 17, 1273 C. E., in Konya, Turkey. His remains were interred adjacent to his father’s, and the Yeşil Türbe (Green Tomb) was erected above their final resting place. Now the Mevlâna museum, the site includes a mosque, dance hall, and dervish living quarters. Thousands of visitors, of all faiths, visit his tomb each month, honoring the poet of legendary spiritual understanding.