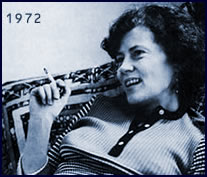 On April 27, 1934, Jean Valentine was born in Chicago, Illinois. She received a BA from Radcliffe College in 1956 and has lived most of her life in New York City. In 1964, Valentine’s first book Dream Barker (Yale University Press, 1965) was chosen for the Yale Series of Younger Poets. She is the author of several poetry collections, including Shirt in Heaven (Copper Canyon Press, 2015); Door in the Mountain: New and Collected Poems (Wesleyan University Press, 2004), which won the National Book Award; and Home Deep Blue: New and Selected Poems (Alice James Books, 1989). She is also the editor of The Lighthouse Keeper: Essays on the Poetry of Eleanor Ross Taylor (Seneca Review, 2001).

Valentine has been awarded grants and fellowships from the Rockefeller Foundation, the National Endowment for the Arts, the New York State Council on the Arts, the Guggenheim Foundation, and the Bunting Institute. In 2000, she received the Shelley Memorial Prize from the Poetry Society of America. She is the recipient of the 2009 Wallace Stevens Award from the Academy of American Poets.