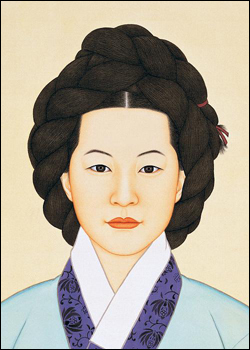 Im Yunjidang (임윤지당 / 任允摯堂) (1721-1793) was a Korean poet of the late Joseon dynasty who’s now considered to have been one of the first female Korean philosophers. She was a daughter of fallen aristocrats who recognized her rare talent and her second elder brother taught her many literary, philosophical, and political texts of the time, even the ones typically reserved for men. Even after she got married, Im dedicated her nights to studying in secret, and liked to contemplate and write about Neo-Confucianism and political matters.