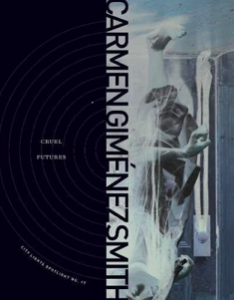 …you
should write about
my writing about it,
then we’ll be the infinity
symbol together projected
against the littered sky.
—from“Love Actually”

From its first pages, Cruel Futures is a book of intense assuredness. Carmen Giménez Smith’s latest book is richly lyrical, and dense with honesty. Her writing combines momentum with variety to keep the book lively.

The lyricism of Giménez Smith’s work eliminates any artificial separation of personal and political. She speaks from within various systems about those systems; writes from within a body about the body. Her voice is disarmingly honest, and that remains constant through shifts in tone, subject, or form. The speakers in Giménez Smith’s poems are likeable, funny, dark, messy, and brilliant. In nearly every poem there are perceptive moments like this one from the ending of “Conspiracy Theories”:

…Children are prior to language, the legislators
of the world. Their unformed poems
are prophecies trampled by words.
One more: love is a hologram that disturbs
the air because it is matter. They release
a gas that kills it in us, though the revelation
tells me if they keep it away from us,
it’s something we should have,
something we should take.

With such cutting observations and wistful truths, we witness how the world flows through the consciousness of our speakers as they try to unravel a knotty reality. Giménez Smith’s language is at turns insistent, precise, musical, and incisive; she’s a master of tone:

I pluck stray hairs from my beauty
to assert control over my beauty.
I measure out what I have left. (“Careworn Tale”)

This is a good example of what can be found elsewhere in this book: larger considerations and darker undertones sneaking into what pretends to be bare declaration. It addresses rape culture and misogyny, the challenges of living in a world of mass media and late capitalism. Humor’s never far away—which is welcome, since the news seems to always be bad.

In addition to the harsh ecosystems in Cruel Futures, Giménez Smith also turns an unblinking eye on psychological and emotional reality. Prescription bottles make cameos, speakers mention being off meds, and mental health is given its due space without being glorified or belabored..[1] For many of us, taking daily medication, monitoring moods, caring for a sick family member are just as much a part of daily life as brushing our teeth. Far from earning points just for engaging with the subject, Giménez Smith is often at her strongest in this area. “Bipolar Objective Correlative” is probably the best poem about bipolar disorder I’ve ever read. From “A Self-Knowledge”—

Being frenzied
is acknowledging
heaven’s turmoil:
unruly tentacles into
each nook, each fold
of time and space.

Giménez Smith lays her words out carefully with sharply broken lines whose subject and syntax here echo Elizabeth Bishop’s lost door keys, the hour badly spent. Reading Cruel Futures often feels as if the poet is letting the reader look in the mirror over her shoulder, and many of these poems really did make me feel as if the top of my head were taken off.

Impressive in a different way are the longer poems of more than a couple pages, which cultivate an irresistible natural momentum. Some cadences feel like you can hear the speaker drawing breath between the lines, the stanzas. From “Ravers Having Babies”:

The strong rhythm and emphatic rhetoric of longer poems like “As Body” recall spoken word:

…To barter
is outside my purview. I’d like
to begin loading this heteroglossia
with more brutality, but I keep finding
a new pith: make it even realer.

—even as they lament their own inescapable allegiance to lyricism—

…If only I wrote
about robots, and if only
my schooling had been more useful,
but I don’t give a shit about robots.
Instead I’m still caught up
with the lyric, that working class
bauble anyone can foment.

I don’t remember the last time I read the word “foment,” let alone in a poem, as the last word. It’s impressive to me Giménez Smith makes that move. The care evident in her word choice (“How frangible our women, one choice from death!” from “Television Prevents Me from Seeing the World as It Really Is”) calls to mind other razor-sharp poets like Roberto Tejada: “My words were sent underground to where the toggle switch detonates,” he writes in the same poem as “The arcades weren’t / semaphores just because the arrows leading there facilitated those / of us in line…”

Sometimes instead of line breaks and stanza breaks aligning with breaths (eg: the robot bit above), Giménez Smith uses the page to mark the space-silence between words and phrases. The effect reminds me of operatic texts unfolding bit by bit, as the melodic movement both controls and is informed by the words. That interplay gives added nuance to the units it comprises. For example, from “My Brother Is a Savior”:

The words float in particular relation to one another, their placement on the page fixing them as if in a display case. Some of the poems are true assemblies. Giménez Smith includes a lot of multivalent objects throughout the book—

Her liberal use of (only sometimes capitalized) proper nouns nods toward the omnipresence of corporate branding in our lives. Logos, trademarks, and other marketing matter stick with us, and by sheer ubiquity gain a place in our visual vocabulary. At a certain point they become familiar, and familiarity forms perspective.

These poems deep dive into how we live and how we want to, how others live and how we perceive they do through social media or other superficial (and often curated) means. The speaker’s self-awareness makes her vulnerability starker, even as she addresses issues that are much broader than the literal objects.

The way the objects are deployed is like collage, and it works. In a sense, objects are signifiers we all use. What objects we keep around us, and how, says something about us; we derive meaning from that. Editing what’s in the shot before taking a photo is part of how social media works; in the words of Giménez Smith, “we all          fixate on        a palace” no matter what our reality may look like.

Even as we’re brought into the isolated connectivity of social media, her speakers know what’s going on: they comment on their stories as they tell them, editing and going on tangents (for the most part, worthwhile). Poem titles are often funny, setting the tone straightaway (“Voldemort Management Style” “Ravers Having Babies”), while only occasionally, as with “All Money Is a Matter of Belief,” failing to live up to its title or its neighbors.

The best poems in this book set a high bar for their compatriots. One of my favorites, “Oakland Float,” is about three-quarters of the way through the book. The speaker is floating in an isolation chamber because “I wanted to know / what I was without the noise of the world buzzing in me…” Hyper-buoyant, the speaker feels

…the way my body should feel in the world
if it wasn’t shaped by external forces. Unknots, undoing,
uncoiled. I thought it would be like acid, but it was
more like my brain trying to run on its treadmill but
the power is out, so I can’t do the things I normally
do in my head…

With Giménez Smith’s signature rich descriptive language, this poem is a bit of a figure for the book itself: almost hyper-perceptive, turning over the material of the self again and again in a sort of organic flux. The poem ends:

…I tell my students not to use “brain” or “soul,” but I use them
all the time; I thought that too in the float. I was just sparks flying
but still the sparks were connected and made me extra and awake.

[1]Nearly one in five Americans lives with a mental illness. The rate of mental illness is higher for women (21.7%) than men (14.5%). 2016 Data. Source: National Institute of Mental Health (link)

Carmen Giménez Smith is the author of a memoir and four poetry collections— including Milk and Filth, finalist for the 2013 NBCC award in poetry. She co-dited  Angels of the Americlypse: New Latin@ Writing published by Counterpath Press. A CantoMundo Fellow, she teaches in the creative writing programs at New Mexico State University, while serving as the publisher of Noemi Press.

Sarah Huener holds a BA from UNC Chapel Hill and an MFA from Boston University, and traveled in Croatia and Israel as a 2013 Robert Pinsky Global Fellow. Recent poems can—or will soon be—found in Tinderbox Poetry Review, Nimrod International Journal, Congeries, New Delta Review, and Salamander. Sarah reads for INCH (Bull City Press), interviews for The Collagist, and also reviews for the Chicago Review of Books.