What are poetry reviews for? Today’s readers find poems more often than not via social media platforms, individual and bare, rendered stark and two-dimensional by the Adderall light of the Internet. It takes another kind of attention to find and read a book and then go on to tell those others who might themselves find and read books, giving themselves over to what Stevens names as the reader’s desire—the reader who “Wanted to lean, wanted much most to be / The scholar to whom his book is true.” Reviews are a kind of publicity—an effort to help the intimate experience of reading into the public light. This light does not wither poetry, exactly, but it can seem indifferent to it. It is certainly indifferent to the experience of reading a poem, much less a book of poetry—that private communion between a reader and language in the act of mimicking consciousness—that movement like that of Yeats’ long-legged fly upon the stream, of the mind moving upon silence.

But what—I wonder this about so many things now, as do many others—what if Hannah Arendt was right? “The public realm,” she wrote, “has lost the power of illumination which was originally part of its very nature.” She was writing of dark times other than our own, and yet not so very different. “The world,” by which she meant the human world, the world which human beings shape by action, is rapidly diminishing, replaced by the eerie slabs of glass that make villagers and idiots of us all, preoccupied by the laborious task of “liking,” excluding or banishing what we do not “like” to the algorithmic backwaters churning out of sight and out of mind. We—I mean the sort of liberal, tolerant, bien-pensant we that is likely to linger at a website as outré as one dedicated to contemporary poetry—are in flight from this impoverished reality, this reality of impoverishment. What can justify that flight but the imperative to return (teshuvah, the return to the ways of God, as Jews say on Yom Kippur, the Day of Atonement) to that hollowed-out reality, refreshed and strengthened for the fight, rededicated to the forms of action that rebuild the world as place between, as human place. Poetry can offer such a flight, such a passion; it must as Stevens said give pleasure in Arendt’s sense: “Pleasure, which is fundamentally the intensified awareness of reality, springs from a passionate openness to the world and love of it.”

In practical terms, this means that I hope as the new reviews editor of Plume to offer a kind of public light for the pleasures of poetry. Not the shadowless glare of the Minute Machine that eats all our moments and disposes utterly of our sense of a living present, much less our sense of the past, but something more humanly enduring—the experience of books that bring us news of the encounter with the otherness of language and the uncanniness of the self. I hope to bring news of new poets as well as of vital new projects by my elders and peers.

Our house is divided and the world very far from calm. The work of the poem, which is the work of reconciliation that no poem can complete, goes on. We hope to bring you its difficult and necessary news. 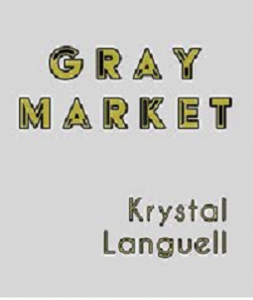 I don’t know how readers are supposed to feel about Krystall Languell’s book, Gray Market. I don’t mean whether to like it or not, or whether to use positive or negative language about it, though in the context of critical inflation anything other than enthusiasm is negative by default, and I don’t mean to be negative. It is a book of genuine poems; I do not know, as any poem goes along, where exactly it is going, though I see more and more each time why it goes its particular way and not some other. Languell is never in poor taste and her testimony seldom runs contrary to my experience, but I am also generally surprised and curious for her to go on.

I found the title phrase twice in the text. I found a few things that recurred from poem to poem, but not so many or so obviously that I felt led or spoonfed. It felt more like analysis than like detective work, more like living in parallel than being argued with or performed for. This feeling isn’t what books of poems typically prompt.

The criteria for selecting texts to include in this book don’t follow the usual expectations of consistency, or rather, the consistency is in the mood of the poems, and not the style or the intended effect, or the escalation of impact, after a first attention grabbing piece, from poem to poem through to the climactic long work at the end. Instead, Languell develops a mounting feeling. The poet of the abject miscellaneous realism of “Catalogue of Humiliations” —

Overlapping and mean at the palace where

In reference to the wrong part of music

A string tied around your finger to remember

— and while I struggle to connect with any of these poems beyond knowing by the end of each of them that a feeling is building into an as-yet unnamed emotion, I recognize the worlds they describe, and I think I can see some connection to a milieu I used to participate in.

For white, middle class nonconformists who sought an exemption from the American system, the decline of major American cities in the 1950s through the 80s meant cheap rent and therefore free time for those willing to put up with poverty and a constant undercurrent of personal danger. Urban poems by white poets from these times speak of glamour, excitement, and rebellion, with an ambiguous stance of opposition to institutional power that does not generally prove to be borne out by the lives of the poets. The return of wealth to the cities in the 90s and on through to the present has, effectively, eliminated cheap rent and free time; poverty and personal danger remain, without the ameliorations (and traps) of dense local social support systems for those exposed to poverty and danger.

In “Field Notes, Brooklyn,” Languell updates a form popular among New York/Bolinas poets since the heyday of mimeo: she provides intermittent private glimpses of a public scene in real time, and her emphasis on the social needs and perplexities of the speaker invert the playing-innocent-but-on-the-make quality of the original:

Bar guy let me read his divorce papers         Sighing along

I’m moaning at the new colors of Le Creuset cookware

I like this despite or because of its middle-class dive bar ambiance (the notes at the back of the book say this poem “owes itself to Soda Bar in Brooklyn”) and would probably read several pages more of it if they existed.

The motivations here and in the 70s version of this kind of ethnography seem similar — observe beauty, report on social relations in real time, draw the reader in. The aesthetic effect is different, which has to do with the sense of time, and also maybe an absence of the need to be at the center of things. I hear echoes of Bernadette Mayer and Maureen Owen here, filtered through Eileen Myles and Maggie Nelson (Myles is a character in a dream poem and Nelson is mentioned in the end notes; Languell also brings Mary Ruefle and Mary Gaitskill into the text). It’s difficult to imagine a poet of New York in the 70s talking about a middle-class dive on Vanderbilt; a Brooklyn poet, possibly. The names of woman writers of a previous generation are one kind of thing; the names of abject male culture figures like Nick Cave and Charlie Day are another.

A couple of the forms Languell uses conk out before the end of the poem: “Field Notes, Oaxaca” and “Field Notes, Liverpool” consist of pages of tercets in which each three lines begin with a new phrase, and all the lines riff on a given Wikipedia entry. “A Certain Profit Situation” and “Pennies on the Dollar” manipulate text from a get-rich-quick book from 1968 Languell found in her room at a writers’ retreat. I like the idea of deploying this kind of lightly reworked found text as a tonal shift from more clearly motivated pieces; the shift goes on too long, and I want to hear more from the ironic selector of personal observations than the sincere selector of neutral phrases.

The social networks of writers in cities are seductive; they promise a community of like-minded voices, support, camaraderie. And they make good on that promise, but the good they make is not enough to live on for long, let alone for more than one person, even if you happen to be one of the small number of people to whom the community devotes its resources, which in any case are more spiritual than material: its attention, enthusiasm, performance venues and publications. The impression of Languell I get from Gray Market is that she has the unmistakeable need to write poems to make something out of her surroundings and her self, and that her faith in the community is tested, but not tried. I admit that I find more hope in her explorations of form, sound, and feeling than I do in a random sample of poems of the re-emerging mainstream’s steroidal self-praise and -blame. That hope is mainly that she and other poets like her get to go on, and that they continue to develop, independent of the market, a sense of what’s really worth talking about.

Jordan Davis is a poet and critic who lives and works in New York. His second book of poems, Shell Game, is forthcoming from Edge Books.