This past June marks the fiftieth anniversary of the publication of Michael Anania’s first book New Poetry Anthology (Swallow Press, 1969). This is particularly important given that his newest book of poems Nightsongs & Clamors—his nineteenth book, continues his commitment to modernist aesthetics, but also because this current work deals so much with time as its focal point. With such titles of poems that directly address the temporal: “In Time,” “Tampa, March 2018,” “Morning Poem” and “Autumn in New York;” and those that suggest it in their fragmentary nature as if caught in mid-perception: “And So,” “Away So Wears,” “As Seen” and “In Order To,” the collection examines its world with precision and specificity that is a tonic to the current landscape of sound bites and increasing speed. Additionally, these poems remind us of the strangeness that the act of seeing—or of any sensory perception—is.

In “As Seen,” the title indicates we are both in the middle and past moment of seeing. The fragmentary title catches the reader en media res, both displacing us from narrative and making strange what the act of perception and association is. Simultaneously, it pulls us in to examine what is being seen—the stitching together of sight and thought:

thought curled over itself, each thing folded inward,
time spun into threads; you wet each strand between
your fingers, unsteady, lift them one by one,

up to the needle’s eye; after several
tries, passing them through future and present
perfect, the past knotted in place and held fast;

consider the still life, not dead, certainly,
or even inert but rather, color poised,
at once liquid and solid, orange paint raised

at the orange’s edge, brush and hand implicit;
light, its light, not yours, caught in the bristles track,
an occasion of form and matter held there; (21)

Here, time is slowed to the patient, specific act of threading a needle and looking at a still life.
Time becomes tangible through the language of thread through the needle’s eye, a passing of time where the needle and its opening is a borderland between “future and “present perfect” even as the knot fixes past. Likewise, the still life moves and poises the poem in the middle of form and matter, liquid and solid. The “middle” defies end, defies singularity and a singular answer. The poem stands in direct opposition to this current political landscape of “now” without a sense of past and simultaneously, dissolves into its own particular landscape so that we are in the middle of “see.” It asks the reader to do some work to get there and refuses ease with its disembodied speaker and studied contemplation. In short, it takes its modernist aesthetics seriously. This poem and others like it in the book arrive at a time when complexity and multiplicity are either in question or have been denounced entirely.

In the poem, “Tin Tin Deo,” named for the song made famous by Dizzy Gillespie, time is suggested through the rhythms that keep time and through the title itself. Read multiply, it can be heard as a derivation of the Spanish phrase, “te intiendo”—I understand you, or the suggestion of “seize the day” by mixing Spanish “ten,” the command form of “have,” with a derivation of the Latin “diem,” day—or translated directly, as “god.” These variations create a border between taking matters into one’s own (human) hands juxtaposed to seizing a metaphysical energy. Alongside these readings, of course, sits the nonsense syllables, the beats and notes that musicians hear. The latter seems just as worthy in an Anania poem since his vision breaks down the act of sensory experience into what feels like syllables:

…memory
And anticipation,
Between one beat

And the next, the air
Above the drumskin,
Dizzy in tropic light;

Move this way, it says,
Hips and arms in flight,
Heel and toe, earthbound;

What sunlight teaches
Is darkness, darkness light
Sepal and whispering— (47)

Time is poised here in moments before action, “between one beat / and the next” alongside the act stilled in its motion: “hips and arms in flight.” The borderlands of the sensory experiences are also revealed so that watching Gillespie play and by suggestion, the conguero, Chano Pozo, and the dancers dance; listening to the song and the moments of “memory / and anticipation,” which bring past and future together. The poem’s movement reminds us of that of a zoetrope, the stills made into movement or analog technology in which we can see the hands movement to tell us the time—and indeed, hands are always significant in Anania’s work in that they keep time through playing music along with showing time etched into hands through life lines and love lines.

As the poem progresses, Gottschalk, the New Orleans musician and child prodigy also addresses how things arrive in the right time or when it’s time for them:

Gottschalk in Havana
in 1854 heard it, spent
months carefully noting

the rests in the score for
“A Night in the Tropics,”
nearly 600 instruments,

sound like dense foliage,
banana tree and plumeria,
and silences etched into

While Gottschalk wouldn’t succeed in incorporating these rhythms into his music before his death, Bebop would. The story of Dizzy Gillespie and Chano Pozo’s meeting in 1947 would not start Afro-Cuban music, but it would champion it in the U.S. and since neither of them could speak the other’s language, they relied on music to communicate (“The Legends”). The crossing of linguistic and cultural barriers in order to create feels a great political act within the country’s current conversation of constructing barriers. The poem might be overtly addressing the moments where all comes together in a timely time—the musicians, the air and light, the dancers, but we can’t help read the political into it since this last election.

In one of the poems about Anania’s Calabrian family, “Omaha Appendices VI,” the poet overtly reveals his own historical borderlines of time and language. The setting is a picnic on his grandfather’s farm in the mid-1940s just after the war:

Everyone was there, aunts, uncles, first, second and third
cousins, Rose’s family, who were also cousins,
my grandfather’s friends, cousins, as well

with hard, thick hands, who wore khakis and white
dress shirts open at the neck, brown dress shoes,
pale brown socks, dove-gray and brown fedoras.
They sat in a circle in the farmyard—
as I sometimes sit now—their forearms
resting on their thighs, their hands curled
between their legs, speaking Calabrese
and English, sentences beginning in one
language and ending in the other.
At six or seven I understood everything
they said and almost nothing they meant (81-82).

The intergenerational and interlinguistic nature of the picnic provides a specific historical photograph of Anania’s family, but also pans out to show us this post-war period when his uncles—like so many men— were just back from Omaha Beach and the Philippines, “stiff with shrapnel” or “stabbed…forty times in the heart” (82). That the speaker can “under[stand] everything/ they said and almost nothing they meant” resonates with the musical communication of Gillespie and Pozo, but also inhabits the linguistic borderlands that the Americas have always been since the Europeans arrived. The subject matter in another poet’s hands might feel quaintly sweet, but this poem wrests us back into the sounds of Italian proper names and reminds us that “names are ways/ of keeping your place in the patrimony” (80) as he tells us in a previous poem:

The “patrimony” here—what’s handed down—is not just a sense of individual identity but given the current events when certain names (and by extension, skin color) seem at risk for interrogation, detention or worse, we can think about what will be inherited nationally.

Anania has often invoked the poet, Thomas McGrath, in reference to politics and poetry, who thought that making the revolution and making poems were two distinct acts. Anania’s work, while never having been what might be called overtly political, now strikes a political note because of its timeliness. With that said, there are still moments in Nightsongs & Clamors in which he clearly reveals his politics, most notably in “An Ode” in which he celebrates the Obama inauguration. Nevertheless, his importance over these last fifty years is “in how he preserves and develops this modernist tradition in American poetry.” His “commitment to …the tradition of experimental, often difficult, poetry that flows from modernism has informed [his] career as poet, editor, essayist, and novelist from its beginning to the present day” (“Michael Anania”). This precision and attention to the multiple, to the complex and experimental stands against the welter of these times. 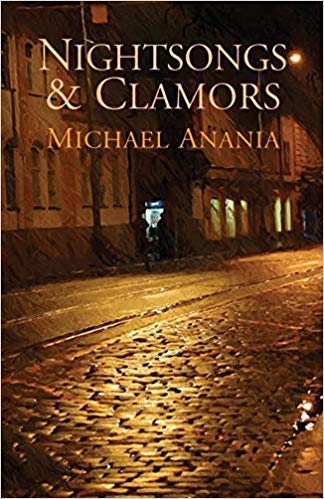 Lea Graham is the author of the poetry collections, From the Hotel Vernon (Salmon Press, 2019) and Hough & Helix & Where & Here & You, You, You (No Tell Books, 2011), along with three chapbooks: Spell to Spell  (above/ground Press, 2018), This End of the World: Notes to Robert Kroetsch (Apt. 9 Press, 2016) and Calendar Girls (above/ground Press, 2006). She lives in Rosendale, New York and Mayflower, Arkansas and is Associate Professor of English at Marist College in Poughkeepsie, New York.

By Donnelly Timothy in Issue #97 September 2019