November Issue # 41: and now these little pre-Thanksgiving thoughts: so many people and their kindnesses large and small for which to be grateful: as always.   But, as I consider it, now, a coincidence leads me to the subject of this month’s “secret poem” — and the author’s ambivalence regarding that subject. (Thanks again to Dore Kiesselbach.)

But before we get to that, people, yes, of course, but more important, for me, were books: they saved my life. Not a remarkable observation, surely, but accurate, and not only metaphorical: anâ€¦arduous youth — the usual transgressions, failures, petty personal miseries that paled however before the cataclysms that befell  my siblings and from which I fled physically and in every other aspect all too early (lest they befall me, too) into that other world of words.

And soâ€¦oh, yes: that “coincidence”: patrolling my bookcases the other day, I came across a volume untouched in a decade, at least: Henry Miller’s The Books in My Life. A list of  The 100 Books that Influenced Me Most — as its full title reads. It’s an astonishing document, oscillating  between such odd (for a newcomer to Miller, anyway)  entries  as “Du Maurier, Trilby” and the daunting off-hand sweep of “European 19th Century Playwrights.” And there I sat, for who knows who long, on the floor, indulging in the inevitable cataloging of my own life-vests that that syllabus was perhaps meant to inspire. (As I trust you are doing even now.) Though for this letter, I will confine myself — and invite you to do the same — to ten books only, from that youthful period roughly between ages eight and eighteen. Note the absence of writers of color, of women, of works drawn from the canon: and, forgive, please, my rusticity: after all, this was Louisville, Kentucky, circa 1962-1972. No comics, science fiction, nature or horror, either.  Sorry, fans.

1. The Baltimore Catechism, remembered chiefly for its illustration of two bottles, one empty  and one half so, meant to represent the state of the soul in mortal and venial sin. My introduction to the notion of absence, which would play such a large role in my subsequent years, and as the bottles in question bore an uncanny similarity to those from which we sipped warm milk every day at lunch, a point incorporated, literally.

2. Death Be Not Proud, by the inimitable El Capitain-faced John Gunther, author of all those Inside the… tomes. This one is about his son, however — Johnny — a twelve year old or so genius/chess player and all-around Tarcisius-manque — who develops, oh, cruel fate, a brain tumor, to which he slowly succumbs, but not before bringing to their knees the gruff hospital staff and assorted heretofore stern and unsentimental strangers and such with his unearthly innocent goodness despite all his trials, which shames them and which his father dutifully unwinds before ending in a slurry of Donne appropriation. Needless to say, I wanted to depart like that, or like Timmy Quaker, about the same age as the protagonist: porcelain innocent who lived across the street and rose gently from this troubled vale after a pas de deux with leukemia. Substitute Kerouac’s Visions of Gerard and the effect would be the same.

3. Guadalcanal Diary, Richard Tregaskis. A not very good book, which I think I recognized even then and quite different in subject matter from the initial choices here.   But, then again, the first two LP’s I ever bought, on the same afternoon at Grant’s, with funds purloined from my paper route collections, were Dylan’s Highway 61 and Ballads of the Green Berets, by SSgt. Barry Sadler.

4.  The Wisdom of Laotse, by Lin Yutang. A green tome, as I recall, provenance unknown. The wisdom, of course, utterly misunderstood: I took it as another word for “indifference.” I carried it with me everywhere, though, including English class, where I found it a useful antidote to the torpid ramblings of Mrs. N, who would have us fall prey to the questionable charms of, yes, Silas Marner. I believe I wrote every paper in that course, regardless of the assigned subject, on some aspect of this book, and received grades commensurate with such. Eventually asked to leave her domain. When it was inconvenient or just too wearisome to tote this one around, I carried a title-visible copy of Veblen’s The Theory of the Leisure Class in my back pocket, which aside from its famous critique of consumerism had the added advantage of further disquieting my high school girlfriend’s wealthy lawyer father.

5. “Silent Snow, Secret Snow,” by Conrad Aiken. A short story, but it carried the weight of a dozen others I might insert here due to its uncanny parallels with my older brother’s descent into schizophrenia. If you haven’t read it (or seen the gruesome televised adaptation on Night Gallery, I believe), the “silent snow” of the title is a metaphor/image of the oncoming presence of the illness, audible only to Paul Hasleman. And here’s the thing: my brother, who became ill at 14, as I said with schizophrenia, read this book obsessively from age 12 until his definitive diagnosis: he knew. And we didn’t.  Its initial lines all but engraved in my memory:

Just why it should have happened, or why it should have happened just when it did, he could not, of course, possibly have said; nor perhaps could it even have occurred to him to ask. The thing was above all a secret, something to be preciously concealed from Mother and Father; and to that very fact it owed an enormous part of its deliciousness. It was like a peculiarly beautiful trinket to be carried unmentioned in one’s trouser-pocket-a rare stamp, an old coin, a few tiny gold links found trodden out of shape on the path in the park, a pebble of carnelian, a sea shell distinguishable from all others by an unusual spot or stripe-and, as if it were any one of these, he carried around with him everywhere a warm and persistent and increasingly beautiful sense of possession.

6. The Boy Scout Handbook, which I include for two reasons: 1) I liked very much the instructions on leaving messages, for example, as shown below: 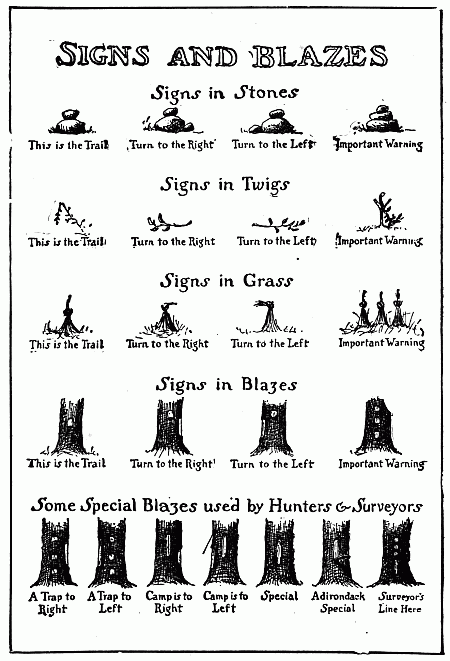 and precisely for reason of their stupendous impracticality, for me personally, at least — it gave me great pleasure to linger on the complexities of anything I would be unlikely to experience first-hand.  Thus the equal appeal of, say, the arcana of  salesmanship and improving one’s social skills, Hell’s Angels and  Kon-Tiki;  2) hand in hand with the former motive was the dawning appreciation that there was a world that I instinctively rejected, one that was humdrum or innocent, well-meaning, conformist, good-hearted, etc. — in short I was a  snob although not  yet fully cognizant of it, and what riper figure for my nebulous ire than these insipid Boy Scouts, whose representatives even more pitiably passed among us on certain days in grade school dressed in the vaguely effeminate/fascistic garb of their pale tribe.

7. Mary Ann Caws’s Poetry of Dada and Surrealism: Aragon, Breton, Tzara, Eluard, and Desnos.  Opening the floodgates through which roared the waters not only of these marvels but their far-flung tributaries: Artaud, Cendrars, Celine, Edson, Cortazar, Sabines, Pavese, Borges, Transtromerâ€¦

8. French For Reading Knowledge, by Joseph Palmeri. The natural progression of my nascent Francophilia. Still in print, and highly recommended to autodidacts everywhere.

9. Cioran’s A Short History of Decay: he of the knee-slapping bleakness alluded to in Plume’s Mission Statement, the greatest aphorist since Montesquieu, and still my favorite writer. By all evidence we are in the world to do nothingâ€¦ to suffer is to produce knowledgeâ€¦we define only out of despair, to give a face to the voidâ€¦ just the occasional tonic I needed  for the drug-addled contentment of those times, my own included.

10.  Nicanor Parra’s Poems and Anti-poems, Calvino’s Invisible Cities,Mishima’s The Temple of Dawn: a trio of books chosen nearly at random that signal my new-found fascination with international writing — indeed, I had all but turned my back on US literature by 1972 — at 18! Although I still could fall under the spell of Szasz, or Merrill’s Nights and Days, Bly’s Silence in the Snowy Fields or Simic’s Dismantling the Silence.

Yes, for these and so many more books, I am grateful — a term one must be vigilant in employing, as Louise Gluck observed many years ago now:

Do not think I am not grateful for your small
kindness to me.
I like small kindnesses.
In fact I actually prefer them to the more
substantial kindness, that is always eyeing you
like a large animal on a rug,
until your whole life reduces
to nothing but waking up morning after morning
cramped, and the bright sun shining on its tusks.

As noted, changes are coming to Plume. Layout, Navigation, Design…new staff members. These will be incorporated slowly, beginning — prudently considered, after the first of the year.

Many thanks to Jeffrey Greene and SiÃ¢n Melangell Dafydd, who hosted my lecture at the American University of Paris. Wonderful students, a fine time — for me, at least. Also, much gratitude to this pair for assembling the Plume reading the following evening in the Grand Salon, with a magnificent roster: Marilyn Hacker, Molly Lou Freeman, Emmanuel  Moses, Jeffrey Greene  and Claire Malroux. Marilyn provided prefacing translations of the original works of Emmanuel and Claire, who then read in the original French. Much of the work had appeared in our pages, and it was a great pleasure to hear it in that room. A delight in every respect.  And a number of copies of the 2013 anthology soldâ€¦

Now live: my interview this month with Mary Mackey, regarding the trials and rewards of putting together an anthology at marymackey.com.

It appears — thanks to Bryan Duffy — Plume has a presence on the very new and interesting Ello. If our readers happen to be part of this “…simple, beautiful, and ad-free social network created by a small group of artists and designers” we can be found at https://ello.co/plumepoetry

The print Plume Anthology of Poetry 2014 is almost full, I think, save for the Featured Selection, which should take definite form in the next week. And a preface, and an introductionâ€¦

(Again: on the off chance that you, poets, are interested in reading for PLUME or might want to organize a reading in your own neighborhood, please, again, email me at plumepoetry@gmail.com — we’ll make every effort to accommodate you, I promise.)

Our cover art this month owes its place to my visit to Paris, of course: a still from Truffaut’s The 400 Blows.  I was fortunate to be there for an exposition of the director’s work at the CinémathÃ¨que.

For New Work Received this month, per usual see the Editor’s Note.

Readers:  Welcome to Plume, Issue 75 October: and here in Florida, that means another month, maybe two, of summer.   And hurricanes? Perhaps.…

Muhammad Ali with his mother Odessa Grady Clay at her home in Louisville in 1963.  Credit: Photograph by Lin Caufield.…

“Bluer than Blue”, Albertus Gorman 2017 Readers:  Welcome to Plume, Issue 69 April: and some news to follow, but, first, our…