Republic Café is David Biespiel’s sixth book of poetry. It is arguably his finest work. Loosely based on Alain Resnais’ romantic drama film Hiroshima Mon Amour, this book-length poem borrows the movie’s main storyline and recasts it as a shape-shifting Noh play, presented in 54 numbered sections. The story follows two lovers over a 36-hour period as they meet and have an affair in the days following 9/11. Within this framework, Biespiel creates distant mirrors from 9/11 and other periods of epic violence—Hiroshima, the Holocaust, and the Crusades. These tragedies become an advancing and receding stage set for the protagonists to explore what it means to love in the face of human catastrophe. Biespiel, like his evident progenitor Walt Whitman, evokes a consciousness that argues for greatness of spirit, transcendence, and ultimately forgiveness.

Biespiel has been called a post-modernist’s Romantic poet. His literary career has been at odds with much of what was in poetic fashion at the time. He saw that Modernism had limits in exploring human concerns that traditionally have been examined through narrative. His current work also goes against the popular grain of hyper-personalization. In his craft, he believes in “buying low”—using methods that are slower in pace or currently out of fashion (narrative and simile are examples). Unlike Louise Glück, who attributes poetry’s ability to endure to indelible voice, Biespiel prefers to search for poetic vision. He chooses vision over voice mainly because vision can change. The narrator in Republic Cafe begins with the personal, then expands to evoke a protean consciousness:

When I was a boy, north was the Red River.

Biespiel’s book reflects his admiration for the work of Robert Bly and Wallace Stevens. Like Bly, he builds metaphors from hard reality in the manner that Gabriel García Márquez described when he compared literature to carpentry: “With both, you are working with reality, a material just as hard as wood.” Biespiel also shares Bly’s distant but respectful view of God and his veneration of the wisdom of the body:

Men climb step by step in the hospital before resting in a
small chair
Just as the Lord sits with the dead watching darkness sweeten
the fall crops.
But the dead have not decided if they are lonely.

From Stevens, Biespiel borrows and advances the use of geometric language. Where Stevens was a painter and world-maker of language, brilliant but cerebrally cool, Biespiel takes Stevens’s angular geometry, adds flawed people and a cinematic eye, and turns up the heat:

In a city neither was born in, we are nameless.
After making love, we are ash.

Studded into the folds and embrace of an elbow, my sweat is
like dust.
In the folds of your elbows, down to your wrists, your skin
glitters
Like first stars.

Biespiel is a cinematic poet. His sections move in theatrical beats: raise the curtain, advance the action, increase the dramatic tension, then summarize the argument. For example, at the end of Section One, he says we are imperfect vessels of memory and experience. With these flawed tools we must map the trajectory of our lives:

From here I get the news of the world.
I map and intersect the grid lines of what I have yet to forget.
In this way, everything remains where it is all at once, and I
remember almost nothing.
Like a shadow of rain clouds in the sky’s mouth,
Everything appears, disappears.

Between sections, Biespiel uses a device, an aside, something to be put away for later, as a bridge to the next part of the poem’s argument:

Tomorrow I must write: the imprint of a shadow of a leaf on the
dark ground is God protecting all of us.

In Section Four he notes that love is a hero’s journey for which we all are unprepared:

Nothing told me love meant dragging the dead across the hills.

All beginnings are fearful and imperfect. Love, the queen of all new beginnings, is archetypal when we act, even though it feels as if we are just stumbling along:

Through his characters, he discovers that forgetting is a service that the body provides to move us toward acceptance:

When I say forgetting, I mean reconstructing the soft winds
that come with sweetness in the mornings.

Biespiel says poems have shapes. An ode is a figure eight with a thematic center and loops that go out and return. A lyric poem is a spiral that advances in overlapping images. The idea of the spiral is developed in Republic Café to become part of the poem’s central theses. The poem’s argument echoes the form:

If the unseen is to be seen,
It must be the one place in creation that is spiraling,
languidly—

The demands of the book-length poem appear to pull the poet back and forth between narrative and the jazz of language. Some parts are pure emotional fabric where the lyricism arises like fragrance from cooked ingredients. In other places the narrative is pure and direct. Biespiel combines these elements to create high velocity:

To remember love, we must wince against the weak sun.

You unbutton your dress
And whisper, one by one, words that slip into sleep in the
outward land,
Newborn, courtyard, husband, promise.

Republic Café seems effortlessly ambitious in scope. Biespiel explores broad, overarching themes that few poets are willing to meet head on today. Though the story background is horrific, the poem is hopeful. This deeply human book argues that forgetting is central to remembering what is important (as Nietzsche said, “Any act requires oblivion”). It reminds us that love is key to our survival and that forgiveness is a requirement, not an option. Republic Café is the graceful and moving work of a poet at the top of his game. It should be part of your permanent library. 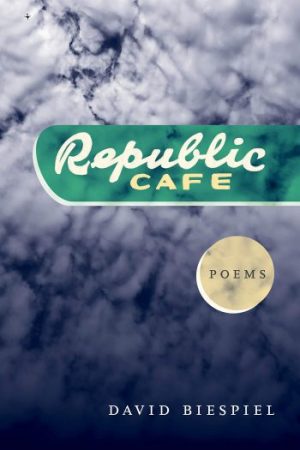 Craig Brandis lives in Lake Oswego, Oregon and studies poetry at the Attic in Portland. His work has been published in Work Literary Magazine, Poetry Quarterly, Red River Review, and elsewhere. He is retired from careers in IT management and construction and has a special interest in poetry concerning the world of work. A selection of his poems may be seen at www.craigbrandis.com