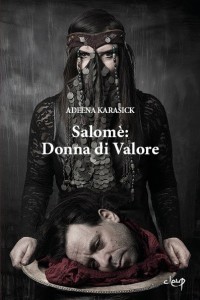 The most recent performance of Richard Strauss’s Salomè I saw was staged by Palm Beach Opera in a shiny new auditorium named after a noted philanthropist, yacht designer, and inventor of the color laser printer. South Florida audiences are notable more for their money than their cultural sophistication, but I was still taken aback when the well-dressed elderly gentleman to my right, at the moment when Salomè kisses Jokanaan’s severed head, let out an audible snort of mingled surprise and disgust. As the lights went up and the applause subsided, I heard him say to his wife, “Well, I wasn’t expecting that.”

Silly me! I thought everyone knew how the Salomè story goes. After all, the fate of the beautiful daughter of Herodias, wife of Herod (first-century Tetrarch of Judaea)—she dances for her mother’s husband and so arouses his desire that he promises her anything (up to half his kingdom), then she demands the head of John the Baptist—is one of the most oft-repeated tales of the European fin de siècle, and echoes well into the twentieth century. Flaubert and Mallarmé narrated it; Massenet and Wilde staged it (Wilde’s play supplying Strauss’s libretto); Klimt, Moreau, Beardsley, and a host of others drew or painted Salomè. At the turn of the century, you couldn’t walk into a fashionable gallery without catching a glimpse of Salomè dancing or of the Baptist’s head staring dreamily up from a charger. Even T. S. Eliot’s Prufrock, before comparing himself ineffectually to Hamlet and Lazarus, steps into the Salomè-story for a moment: “I have seen my head (grown slightly bald) brought in upon a platter…” (The “voices singing out of empty cisterns” in The Waste Land, I am convinced, alludes to the cistern in which Jokanaan is imprisoned in the Wilde-Strauss Salomè—though that reference seems to have escaped the army of Eliot annotators.)

As Prufrock’s vision shows, Salomè is a potent symbol of both feminine sexuality and masculine sexual anxiety. What is decapitation, after all, but displaced castration? Salomè encapsulates a particular fin-de-siècle fantasy of female evil: first she seduces, then she castrates. She is a human praying mantis. No wonder the last line of Wilde’s play is Herod’s appalled command, “Kill that woman!” And of course there’s no getting around the fact that the Wildean Salomè is not merely a misogynistic construction, but embedded in a rankly anti-Semitic atmosphere. All in all, Salomè is neither good for women nor good for the Jews.

Adeena Karasick’s Salomè: Woman of Valor, presented in a lavishly illustrated and typographically rambunctious facing-page Italian/English edition, aims to fundamentally reinterpret Salomè, to transvalue her as a cultural symbol. As she appears in the New Testament, Salomè is something of a political catspaw; she does her mother’s bidding by arousing Herod’s lust and procuring the Baptist’s execution, then disappears from the narrative. (In Matthew and Mark’s gospel’s she is merely “the damsel”; medieval commentators named her by cross-referencing Josephus’s Antiquities.) It was later writers who infused Salomè, not merely with the ability to arouse desire, but desire of her own: this is clearest in Wilde’s play, where Salomè’s central motivation is her overwhelming lust for Jokanaan.

No longer a “villainess,” in Karasick’s version Salomè has become a “heroine,” a “freedom fighter.” It’s precisely her sexuality—her sexuality revalued not as threat but as triumphant joy—that sets Karasick’s Salomè apart from earlier iterations of the figure. The poem is one long dithyramb of desire, a seven-veiled dance of seduction that celebrates the tangles, convolutions, and ecstacies of unbridled sexuality. But this is the “dance of the intellect among words” (Pound’s phrase, which Karasick drops in her endnotes), and Salomè displays her sexuality not so much by talking about desire as by demonstrating how desire flows through language, an unstoppable flood of allusion (both literary and pop-cultural), word-play, and extravagant and outrageous sound-work.

The second section, for instance, “Song of Salomè,” riffs off of the Song of Songs (traditionally attributed to Solomon, whose name is cognate with Salomè—or in Hebrew Shulamit, from shalom, peace, or shlemut, completion, perfection):

Harness me with kisses of myth:
fortify with value like buttered signs

with amulets of giddy aberrance
flooded with wordy perjuries.

I am a bricolage but cadenced.
Oh yes, a draughter of rused asylum
as the tenets of catered radar
as the torqued courtiers of silly men

Other sections play off of the extravagant, fake-Biblical prose of Wilde’s play. Section XV is Herod, describing the treasures he can offer the dancer: “Salomè, I have purloined riddles like rooms riffing with revery wrested screams of gilded debt, torqued like the ballyhoo of fluid numena, billowing singes sensors, the solace of shawled myth…” Section XVIII is Salomè addressing the prophet’s head: “And i will kiss thy myth, Iokhanan. i will kiss it now. i will bite it with my teeth as one bites rapt truth. Look at me Iokhnan with your eyes of ragged aggregates, all heretically erotic, depotic of oscillate postulates impossibly flawed…”

Other sections are less highfaluting in their references. Salomè’s dance is rendered in a dense collage of dance-oriented pop song titles: “sALOmè yOu ArE tHe DaNcInG QuEeN / DanCe nOw SalOmÉ ComE / daNCiNg In tHe nIgHt oF thE dAnCiNg fLaMe DaNcinG / oN tHe CeiLiNg, iN tHe DarK, / JuSt pUt On YoUr red sHoeS aNd dAnCe…” And the two figures of Salomè and John the Baptist, her obdurate opposite, appear in glossalalias of song-reference:

The poem’s language sings throughout in a dense, manically playful register, reminding one of some unholy hybric of late Ronald Johnson (ARK) and Harryette Mullen (Muse & Drudge) in an emphatically Jewish idiom. The text is thickly sown with allusions to the Bible, the Talmud, and the Kaballah, whose mystical word-play and number-shuffling are clearly an inspiration for Karasick’s own practice. (There are long passages dancing around and among the implications of the mikvah, the ritual bath, and the various permutations of the number seven in Biblical and mishnaic thought.)

The text of Salomè: Woman of Valor, even with its color illustrations and typographically disruptive interludes, probably doesn’t come close to capturing the full experience of the work, which will premiere in March as a kind of Gesamtkunstwerk combining Karasick’s reading, video art, dancing (both ballet and belly-), and music by Frank London (trumpeter of the Klezmatics). Even on the page, however, one gets a clear sense of how performatively exciting the piece is; Karasick’s readings from the work on the PennSound site are pretty electrifying. [http://writing.upenn.edu/pennsound/x/Karasick.php]

The Italian edition of Salomè: Donna di Valore comes trailing clouds of critical apparatus. The notes at the end open up the text in interesting ways, and spiral out at times into playful midrash. The Introduction and “Author’s Note” before the poem, however, are pretty heavy going; I felt at times I was back in one of those Derrida seminars in grad school, my notebook deconstructing itself before my eyes. This prefatory material does a sturdy job of tracing the theoretical underpinnings and implications of what Karasick’s up to—but save it for later, and immerse yourself directly into Salomè’s wild, whirling dance of language and desire.

He has published poetry and poetry reviews in a wide range of venues, including The Rumpus, Golden Handcuffs Review, Epoch, Parnassus: Poetry in Review, African American Review, Chicago Review, American Letters &amp; Commentary; and Facture, as well as the anthology The Gertrude Stein Awards In Innovative American Poetry. His critical essays and reviews have appeared in among other places Twentieth Century Literature, American Literature, Shofar, Studies in American Jewish Literature, Sagetrieb, The Cambridge Companion to Modernist Poetry, and The Blackwell Companion to Poetic Genres.

Why Swinburne? (An Open Letter) Dear B——, The other night at the bar, when I had just gotten in from…

Poetry as Wallpaper: In  (Ambiguous) Praise of Low-Intensity Poetics   There are many William Morrises. For Marxists, he is a…