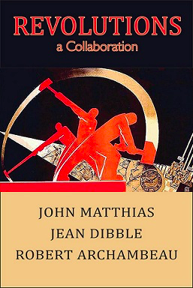 Revolutions, the title of this collaboration among a Notre Dame-affiliated poet (John Mathias), a printmaker (Jean Dibble), and a literary critic (Robert Archambeau), is mildly deceptive; the book is less concerned with creating insurgencies than carrying out a more playful, syncretic practice within our revolutionary present.

The first long sequence of the book, “HIJ,” is based around a nine-poem sequence by Matthias that follows “a dictionary game, a game whose pieces are the first few nine-letter words he finds in a dictionary’s listing under a given letter.” His poetics here are Oulipan: rooted in a materialist system that privileges the letter as its emblematic unit for investigation; its formal rules and ludic dexterity intensify the coincidence and dissonance among traditions, semantic signs, and sounds. The narrative, madcap as the rules are bound to make it, follow Hij around a critical hallucination of linguistic cut-ups.

The second sequence of the book, “After Five Words Englished from the Russian,” is an investigation of memory and damage in Ossip Mandelstam’s “He who Finds A Horseshoe,” routing through among other things 1) the corruption of Cyrillic letters into Unicode dingbats, signifiers without signifieds; and 2) an elision between “aplysia,” a type of sea slug used in neurological research for their large neurons, and “aplasia,” or the arrested development of organs. These syncopes roughly drain the black, despairing blood of the original into a dizzying excess. In Mandelstam’s version, the poet finds his voice to be not his, but “dug from the earth, like grains of petrified wheat,” Matthias ironically answers (punning on the dingbat font Windings): “This is your whingding moment: dug out of the ground like gold.”

Matthias excels with sensual intelligence and bizarre music, his ability to switch between hyperstress and “feet-shuffling” iambics, his awareness of the formal traditions within modernism—often lacking in contemporary poetry. The Dibble collages throughout the book are a mashup between vivid tapestry and broadside. Archambeau mostly plays straight-man: adept observation, list poem, punchline. (Lobbed by a list of nonsense insults, Archambeau replies: “No comment.”) The book is endearing is the sense of three old friends making wisecracks, unafraid of syncretism as long as it’s humorous or well-sourced.

This, for example, is how the dynamic plays out in “2. Onomastic”: 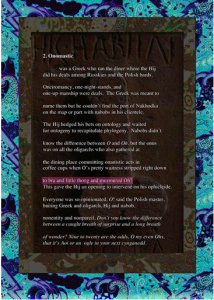 As Archambeau mentions, it’s hard to miss the alliteration. One could admire the heavy sound-play here, or resort to tendentious gloss: “Oh” and “O” refers to a scene from Nabokov’s Speak, Memory, where the young Nabokov cracks puns among his siblings about the name of his governess Mademoiselle O. The hectoring “Polish master” mentioned at the start and end of the poem is Czesław Miłosz, directly quoted in the epigram of Robert Hass‘s Czesław Miłosz: In Memoriam:

Around the time of his ninetieth birthday, he sent me a set of poems entitled “Oh!” I wrote to ask him if he meant “Oh!” or “O!” and he asked me what the difference was and said that perhaps we should talk on the phone. On the phone I explained that “Oh!” was a long breath of wonder, that the equivalent was, possibly, “Wow!” and that “O!” was a caught breath of wonder and surprise, more like “Huh!” and he said, after a pause, “O!” for sure.”

Archambeau’s Laureates and Heretics, where he talks about both poets as students of Yvor Winters at Stanford, spends a few pages on this lineage: Milosz, Hass writes, offered him an antidote from a Poundian poetics of images into the poetry of statements, someone “who did not assume that the great drama in their work was everything in the world that was happening to them for the first time.”

Throughout the book and his career, Archambeau has spent a lot of psychic effort defending Matthias against the dismissal of his poetics by other critics as “just modernism.” But is Matthias’ poetics a “just modernism”? Is his recovery of modernism reactionary or a relevant response to our material and political conditions? Is its wordplay onanistic, or resistant and expansive?

Matthias owes a larger debt to Pound and the British modernists in general, Archambeau concedes in Laureates and Heretics, but Matthias’ contribution is tempered by a anti-onomastic understanding, offering a wider historical awareness than his forebears. Matthias does not allow for the spectacle of seeing to mark his politics with melodrama and faux-naivete:

For Matthias, there are significant rhymes between different historical moments, but these do not open out into a sense of the eternal. Rather, they stress the continual turbulence of history. One effect of this…is to transform any apparent millennial aspect of the present into something precedented rather than singular. We feel we have been here before.

Erstwhile in this book Archambeau also champions Matthias’ modernist ambition, which is to make history exemplary. Matthias’ interest in modernist technique is backed by an encyclopedic knowledge of the movement, his attention on their forms and materials. Archambeau also draws attention to Matthias’ sympathies for “isolated” artists:

There had been alienated artists before the twentieth century, but nothing like what we find among the Modernists…Matthias is drawn to the lives and works of the Modernists because they speak to the condition of all non-, or anti-commercial artists who have come after them.”

“Alienation” here is ahistorical. Never mind that poems writing against (whether as complaint or boast) the unfairness of public favor have existed for millennia. Archambeau’s explicit political statements, at least two about Trump, knowingly fall “flat” for their explicitness. If the book’s rollicking critical intelligence serves some politics of resistance, we will not find it in valor of Matthias’ allusive difficulty or for its rallying in the face of political evil, a la Mandelstam’s Stalin epigram—but in its aesthetic of integration.

The book’s aesthetic, I argue, revolves around Matthias’ metaphor of differentiation: generating a diversity that nonetheless depends on discrete units, in order that their genealogies be parsed out. The visuals conform to this theory: the authorial contributions of each of the three are treated equally and clearly demarcated. Dibble’s images, with a few exceptions, score the text legibly instead of more dramatically transposing its form. The cover image is of three discrete red agitprop figures swinging a hammer in one parabola.

Much of the effect of “HIJ” surrounds how Matthias joins small syntactic units to absorb transnational valences: for instance, how “Hij” can be seen as 1) three letters in alphabetical order which occupy three adjacent spaces on a modern QWERTY keyboard; 2) Dutch for “he”; 3) the beginning to “hijab.” Many of these nine-letter words end up being archaic titles (e.g. hussar, nabob)—as Pound wrote on the ambit of the Cantos, the “music of a lost dynasty.”

Modernism, in fact, is seeing something of a contemporary revival. A work like Jones’ In Parenthesis is oddly in tune with the recent trend of docu-poetry, say, Robin Coste Lewis’s Voyage of the Sable Venus. Both complicate the distinction between prose and poetry, uncovering the music within “non-poetic” or colloquial utterance. In this genre, data is piled on top of data to serve a dense, partial perspective of history.

The break of modernism thru postmodernism isn’t a disappearance, Jameson has clarified, much as it is revealed to be only one mode among many, pushed into a specialized zone. Now the zone is being repopulated: flat whimsy has become suspect; unmarked speech is suspicious. (One can see this in how Archambeau et al. insist on the power of their words to transform the Real, and then modestly get knocked back into history.) There is now immense cultural pressure for us to differentiate: to balance, to specialize, to write lists, to make taxonomies. This pressure revives necessary interrogations across text and its means of production; it adjudicates nuance. The cost is that our reality is so suffuse with compulsory attention and self-editing that, even in our attempted recovery, a character like Mandelstam’s Dante; or a poetic cynghannedd that Matthias references (or, in another register, a totally integrated affective flow) simply cannot be imagined. One senses this when Matthias’ grip on lyricism and discernible wit loosens to sustain logorrheic pressure — to cite Mandelstam’s nightmare, “No word is better than another,/The earth is buzzing with metaphor.”

Revolutions is not a rabble-rouser, is not a Gesamtkunstwerk, knows better than to ask for a hammer to the state. It’s a roadmap for a fun meta-textual journey, as entertaining as it is erudite, that reminds us where we’ve been.

Brian Ng is a poet and technologist from Hong Kong who lives in the U.S. He also edits the Zahir Review (thezahir.review).