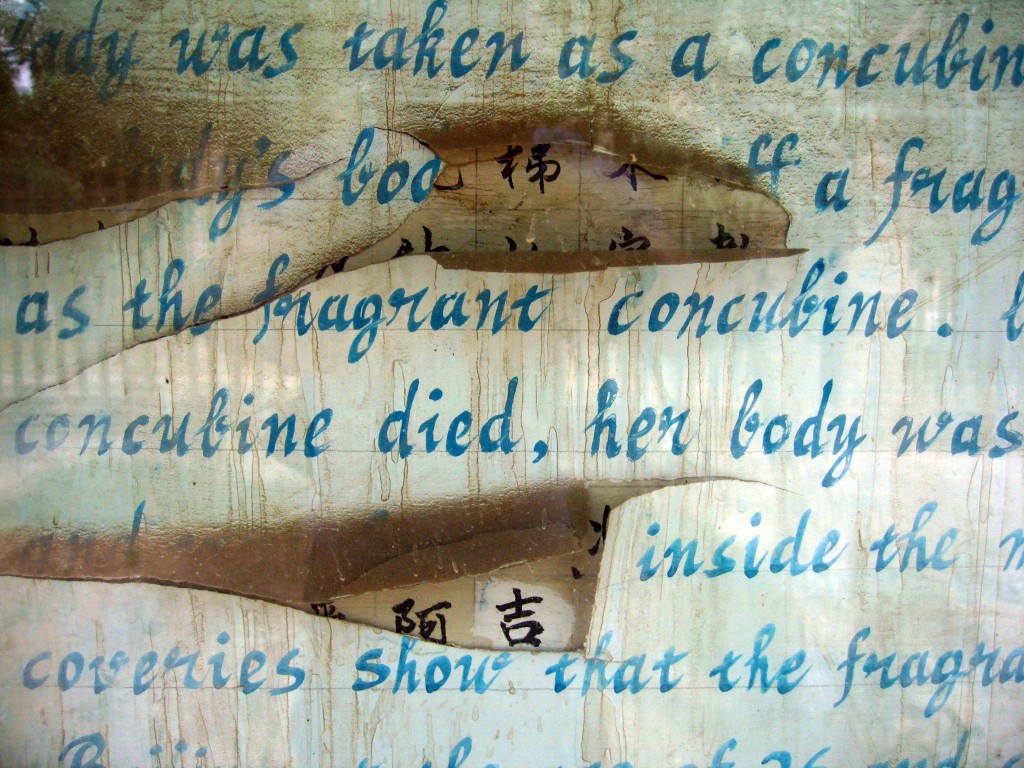 In his first book of poetry, Analects on a Chinese Screen, Glenn Mott claims that the most interesting thing about him is that he is in China. I beg to differ. Mott’s China is not like the China others are “in.” It is not place but the perception of place that offers itself as the real. In other words one can be in China, but what that means, what China “is” will be dependent on who you are, what you can decode, encode, process, “take in,” or attend to. Analects on a Chinese Screen was not a tour book, or the Middle Kingdom of a Sinologist, or the frontier of transnational investment opportunities, and not a monolithic state either, but a complex entanglement of layers filtered through a series of shifting proximities, a convex China, one that has been uprooted and redistributed on the page to reveal multiple angles of Chinese interactions internal and external.

Reading Mott’s work we are not asked to untangle China, that trope of an enigmatic or mysterious “Cathay,” but instead to think through the weave of being in relationship with the “imaginaries” of China, from the complexities and subtleties of historical, aesthetic, and ideological palimpsests. Like a linguistic version of Robert Rauschenberg, Glenn Mott’s poetry redistributes these layers as surfaces in order to locate depthlessness, boundlessness within his lines, so that we may draw new perspectives out of the wreckage of old questions.

In the present series, Mott not only continues the work he began with his first volume, but extends it considerably. For instance, Chinese and English co-emerge throughout with greater frequency and variation—characters and Chinese phrases pepper the text, sometimes with translations, sometimes without, and in many cases, this reader is not sure if the characters are Chinese or Sinophonic English such as in the line: “In Guizhou we are colored men (白人), pronounced Byron,” but he follows this homophonic play with a piercing ambivalence toward what I see as the transpacific Orientalism of the Romantic tradition: “Spiritual junkies. We are the cold / whites around the yolk.” This language play continues in lines like, “Wǒ is me” where Wǒ (我) is not figured as “me” but is—as it means in Mandarin— “me.” It’s the rendering of a China blues. Such sound play also takes place within his English more generally through a forceful and imaginative use of lineation and pervasive enjambments leading to music we did not hear in his earlier work: “no more. Who conforms to loss / is accepted on a cross. Joy imitates / joy, boy. The way, the way. So says Old Tzu. / And so say I, old Jew with no regret.” There is an unflinching confidence to Mott’s prosody in this series, presencing something about the period between this work and his last book, something that has enabled a new resonance to mature. This assured footing may be most palpably felt in his translations of the Tang dynasty poetry included here. The voices in these poems come through as living poetry—not artifacts—as immediate and resonant, and yet coming to us from a distance that is given the space it needs to be so, like the space the temple bell punctuates in Zhang Ji’s “Night Mooring.”

Finally, it is worth mentioning that this series opens the possibility of a confident spiritual ambivalence—or is it an ambivalent spirituality—for we have poems here that open into such scales and measures but do not close them down into directives or teachings. Take for instance his poem dedicated to the poet Che Qianzi (affectionately known to his friends as Lao Che).

to turn from reason

I could not quote from this poem without jamming the door halfway open, so I leave it here in full in the hope that, swung wide as it is, the work can be seen as the gesture it is, a space where words open between us, and remain so, as an invitation to walk through.

A hundred names in every thousand here is

In Guizhou we are colored men (白人),

Spiritual junkies. We are the cold

whites around the yolk.

To those who don’t test me as a piàn zi,

a cheat, I happily pay the foreign tax.

We are treated well

by those who don’t use us as ATMs.

But give what gifts you have.

And that will be worth a higher

price for simple dishes, of salt

and oil, peanuts and cucumbers.

In every marriage there’s room

I think about that earnest man

and his earnest jottings

who is able to pay for his jawboning

by working on Maggie’s Farm

and will leave it unwelcome

no more. Who conforms to loss

is accepted on a cross. Joy imitates

And so say I, old Jew with no regret.

In every house there is room

for an old chair that says VE RI TAS.

Do not sit there, brother,

I do believe I’ll dust my broom.

And after I dust my broom, any one

of you round eyes, Lord may have my room

I’m goin’ to call up in Wuhan,

just to see if my baby’s over there

from Joe to Zhou.

my baby’s in the world somewhere.

Still, it all came true

So maybe you’re mad at the truth.

The guy in the lobby who asked

Is this the next one? Don’t say.

He was a prophet.

If you’ll tire of me yet.

The question in that taxi,

If we last that long, I say.

Don’t say let me in again

And I’ll never let you go.

Not long after the end

of the last cultural revolution

I was riding my bike down

some translation of a street

up their business in the back lots.

I was my own father, then

And wanted no parent to tamper

No father who I am, no

mother that conceived of me.

To explain them, I forget words

Altogether. And it seems

We have often asked

Of occurrence to each

TO SEEK A PRONOUN

To turn out focus

to turn from reason

—after the source in wild grass script

Want a poem fetch a jug

Lift a cup invite the moon

In the air blossom willows

Drunken Li Bai and the monk

We are a congress.

Bring the crock back home

Ourselves against I double

Wǒ is me that shadow.

And a harsher land

For a Vuitton bag

I read or random

Need a poem send your cup

No cadre brother no mistress

a matter of not

it is plain we are

and what to have done

what to look for

If we are the pure

then let us shut

See but the return

Not to know constantly

The quite craven raven

Is a Suzhou crow.

My knowledge was never

The kind of work I did

On the bronze bell.

Glenn Mott is the author of the book Analects on a Chinese Screen (2007), is managing editor of the Hearst newspaper syndicate, and was a Fulbright Scholar at Tsinghua University in Beijing (2008-09). He has also held teaching posts at universities in Shanghai (1991-93) and Hong Kong (2010). While working in China in 2009 he organized a program at the U.S. Embassy on “Law and Journalism” bringing together two of China’s most high profile human rights lawyers, Mo Shaoping (who represented jailed New York Times researcher Zhao Yan), and the self-taught legal defender Pu Zhiqiang (who is currently under arrest in Beijing for his rights work). The program spurred several more workshops with Chinese journalists and legal scholars in the cities of Guangzhou, Xiamen and elsewhere. Earlier this year he worked with the Academy of American Poets to make Poem-A-Day available in syndication to news publications. He has edited Paul Laurence Dunbar Selected Poems (1997), and is currently working with Yunte Huang on an anthology of modern Chinese literature for W. W. Norton.

Jonathan Stalling is an Associate Professor of English at OU specializing in Modern to Contemporary American Poetry, Comparative Chinese-English Poetics and Translation Studies.  He is a Contributing Editor to World Literature Today is the co-founder and an editor of Chinese Literature Today magazine and book series. Dr. Stalling is also the founder and Director of the University of Oklahoma’s Mark Allen Everett Poetry Reading Series and is the author of four books including Poetics of Emptiness, Grotto Heaven, Yingelishi, and the forthcoming book Lost Wax. Stalling is also the translator of Winter Sun: The Poetry of Shi Zhi 1966-2007. Dr. Stalling’s work in interlanguage poetry and translation is the topic of his recent TEDx Talk: http://www.youtube.com/watch?v=7de8ENdf1yU

By way of introduction to this month’s “Featured Selection,” first a brief introductory essay – or rather a self-interview by…

Readers: November: Issue # 41: and now these little pre-Thanksgiving thoughts: so many people and their kindnesses large and small for…

Angela Ball directs the Center for Writers at the University of Southern Mississippi. Her sixth book of…