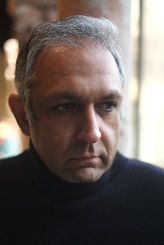 Bhisham Bherwani is the author of three poetry books. His essays have appeared in The American Poetry Review, The American Reader, Pleiades, Rain Taxi, The Yale Review, and other places. He was educated at Cornell University and New York University. He lives in New York City.

In poetry, the speaker, in fiction, the narrator; in the former, persona, in the latter, character. These distinctions, which to varying degrees can be rendered superficial, by and large underlie the considerations that chart the topography of our literature, reflecting the calibration of emotional distance between subject and creator, between creator and audience, the difference, tenuous though the boundary may be, between real and imagined, fact and fiction.

In this light, one could regard the conspicuous absence of poetry, outside the occasional elegy, that embraces a sibling. Poets have not among artists been selectively spared the complications of sibling relationships. Maybe—a hypothesis—such relationships resonate with rivalry (consider the antecedents in the Bible), hardly suited for the transcendence to which a lyric poet might aspire. This may explain the exploration of fraternal dynamics in other genres: drama for example, as in Miller’s The Price, O’Neill’s Long Day’s Journey into Night, Pinter’s The Homecoming, and Shepard’s True West.

In the case at hand, mine, there is no rivalry, and the work is informed by another subject ostensibly sidestepped by poetry: developmental disability. The individual lens of madness, as we know from John Clare, can render things fragile profoundly beautiful, things beautiful, fragile, but I mean specifically not the condition of the eloquent speaker (Robert Lowell and company) or the clever persona (Berryman), but of a real, afflicted other. There are exceptions, of course: Edward Hirsch’s Gabriel and Les Murray’s “It Allows a Portrait in Line-Scan at Fifteen” come to mind, though both these examples, the former an elegy, are from the perspective of parents, of fathers, not brothers.

To what poetry, for whatever reason, has regrettably overlooked, prose (notably memoir, the order of day) has been attentive. Film, too, not only documentary, a natural counterpart to prose nonfiction, but also narrative, inspired by both fiction and nonfiction, has been resourceful: among others, Awakenings, Charly, My Left Foot, and Rain Man.

In light of the possibility that the permutation fuels a need, as Dickinson said, to “Tell all the truth but tell it slant,” I find, to invoke a medium altogether different from page, stage, or screen, especially endearing and compelling the example of Joseph Cornell, his materials and his works, unlike words and poems, both tangible: New York City’s detritus and his otherworldly boxes, the first of which he is said to have made to entertain his cerebral palsied brother.

Under every grief & pine
Runs a joy with silken twine.

One joy, among many, is the selfish joy of expression, of articulation of the experience of a witness, enabled by that most durable of silken twines, the sinewy and pliant sonnet, in poems of love—the condition that subsumes both grief and joy—about, and for, my brother.

I thank the editors of Plume for publishing them.

No bowline, no double Carrick bend,
maybe an overhand, something makeshift,
anchoring the passenger-side handle at one end
to the bottom of the lever of the stick shift.

No deterrent quick-and-dirty, but measure
necessary to keep my brother—car in motion—
from opening wide the door, the hour
she drove him to the school for special education.

He dampened, if not drowned, with screams
the flooding rush-hour traffic’s din.
Despite the deluge of his daily tantrums
our mother, scratched and bitten, did not sink.

I see her younger, hands scarred and bloody, steering,
eyes fixed on the road, ears ringing.

I’d wrap the bandage round the joint and clip it.
He’d undo it. So I split
the end, secured the binding tightly with a knot.

He learned to undo that. Doctors called it “knee
effusion,” the distension “painful.” He’d knife me,
as balm and cloth each day chafed more, with keens.

He’s always had, from back or corn, a chronic
limp: his steps—one heavy, one light—like the wrapping
and unwrapping of a bandage are iambic.

The garden path he loves to circle over
and over, a lap a line of verse, he’d stroll just once
quietly, a poet pensive and composing,

though I saw, more, a disaffected sonneteer
staggering through what measured not one stanza.

What freed him up was a fetter of sorts:
a J. Crew belt he learned to wear in his forties.
He saw, supervised, how he could guide the girdle,
tuck tummy in, pull, slip the buckle’s prong inside a hole.

Always dressed by help, he caterwauled
at first, grappling with the senseless band of leather
under the watch of his taskmaster younger brother.
One day he could do it unsupervised.

Inside the cosmos of his head, I think,
neurons stirred, once-atrophied cells swept across synapses.
Sometimes he misses a loop or there’s a kink,
and pants with strings and shoes with laces

vex, unlike those with elastic and Velcro. What
next will fetter him even less are knots.

We in sailor suits, white trimmed in blue,
garnished round the collar with a bow tie,
against a sideboard, aged three and two.

Little hipsters; some say even cute.
But really two toddlers this side of fate.
Two robustos ready to be lit.

From there between our lots the chasm widens:
you endure—your trials no less
than ordeal by fire—and you’re guiltless.

More than just a bond from then binds us.
When I try to tame a bow tie with a knot
my hapless brainwaves start to leap and scatter

like yours in the EEGs in the ring binder
back into which I slip the old snapshot.

The loop gone wrong, our last name’s e,
the knot abandoned by the a along the scrawl
come from a precious script drilled into me,
like other useless things, early at school.

The notary public watches your outstretched
thumb move to legal document from inkpad.
The signature and, for you, unschooled,
blue blot bond what is in blood already sealed.

I prefer the spirals, a whirlpool
where our one blood circulates,
to my hostile studied squiggle.

Three, brain damaged, you abandoned alphabet.
Speech all guttural vowel, you’re as real
as I without affidavit.

Barely two minutes into dinner, your stomach
must have felt (like ours) all knotted up, enzymes
stunned by bitter buttermilk squash wreaking havoc.
Silently, you’ve all your life digested shame.
I’d rather have had you upchuck
unwarranted embarrassments, though this time
it was different—we all got sick—
and you must have felt exonerated from blame.

Blame for vomit.
Shame for mental disability.
Months later, I hear the plangent cry echo
from when you pointed to the puddle by the window.
God’s dispensed us, for our tracts, peppermint;
for all that’s bitter, stinks heavenward, disinfectant.

Neither therapist nor
abstract expressionist
to tell autistic from artistic, I watch the colors

Not easy to unravel naughts
of piebald whorls. Let it dry.
Mail it to me with a note.

Brother, be my van Gogh.
Let me be your Theo.

Our angiosperm sprouted:
dicotyledonous—siblings
on a sprig—it sprung from nothing.

You’d water it after your meds.
You, who like arching
gnarled trunks with knotty roots in woods,

focused as if on atom,
origin, maybe, of an arboretum.
I thought of you as John Clare

at a pettichaps’ nest, worrisome
about the nestlings’ future.
Your concentration mesmerized me,

beyond, I thought, the realm
of atomoxetine for ADHD.

He’d sit with me after our father died.
The screen saver my idle PC triggered

He’d watch engrossed,
sometimes even tapping on the glass

as if the sprightly nimbus, disentangled
from its bounding black rectangle,

spread beyond the room’s octants, the high-rises,
to above the city, where his father was.

Bhisham Bherwani is the author of three poetry books. His essays have appeared in The American Poetry Review, The American Reader, Pleiades, Rain Taxi, The Yale Review, and other places. He was educated at Cornell University and New York University. He lives in New York City.

Bhisham Bherwani
The sun was overhead. The playground steamed.