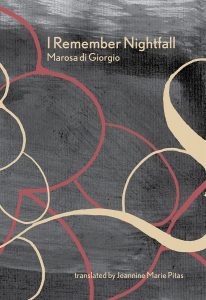 Until recently, the great Uruguayan poet Marosa Di Giorgio (1932-2000) was largely untranslated. But over the past few years, Jeannine Pitas and Adam Gianelli have translated a number of her works, and her poems were featured in the anthology Hotel Lautrémont, an anthology of 20th century Uruguayan poetry edited by Roberto Echavarren and Kent Johnson. Most recently Ugly Duckling Presse has done a great service to non-Spanish-readers (as well as Spanish readers who may have trouble procuring Spanish-language copies) by publishing I Remember Nightfall, Pitas’s translation of four seminal book by DiGiorgio—The History of Violets and Magnolia (both 1965), The War of the Orchards and The Native Garden is in Flames (both 1971)—in one overflowing volume about a mysterious, saturated and violent garden. Her poetry is lush, darkly erotic, weird. At times it is playful, but at any moment that playfulness can turn into terror.

Pitas’s choice of the phrase “I Remember Nightfall” as the title of the collection is apt. Di Giorgio’s poems are almost all about remembering—and mostly remembering incidents that takes place at night or during nightfall or in a morning, that mysterious alternative world where angels and hare-headed strangers visit, where gladiolas turn murderously strange and when one may be forgotten by one’s own family—including oneself. Out of the gaps and noise of this sometimes paradisaical and often sinister remembering comes a profusion weird figures and acts. The very first poem of “The History of Violets”, indeed begins “I remember nightfall”:

I remember nightfall and your room’s open door, the door through
which neighbors and angels came in. And he clouds – November evening clouds, drifting
in circles over the land. The little trees burdened with jasmine, with doves and droplets
of water. The joyous pealing, that endless chirping – every evening the same.
And then the next morning, with its tiny dead angels strewn everywhere like paper
birds, or the most exquisite of eggshells.
Your dazzling death.

The metaphorical—or metamorphizing, permutating—logic runs throughout the collection. In another poem she writes: “There are things that look like other things: crosses, abandoned carts, gigantic snails.” (225). Every thing in this world can potentially turn into every other thing: “the pages of the school textbook, alive in the air, the lobsters like scissors of silver paper, the desert wind loaded with perfume, my father’s horses galloping.” (237) Are the textbook pages similar to the lobster? Is the lobster a scissor? Is the desert wind like the father’s horses? These comparisons are often willfully “flawed” metaphors: the objects that are compared are often too close (an ogre and a person say or a fish and a crab etc.), and the comparisons too multiple (hardly ever is an object compared to one other object, but a profusion of other things). It’s not clear what is tenor and what is vehicle. Instead of one thing referring to another (is the angel compared to a dove or is the dove compared to an angel?) everything can potentially transform into another:

“At the hour when the hyacinths come out like a flock of birds from the hidden land
of nothingness, blue, black, yellow like butterflies, or like red oranges with the lightest
rinds and silver alcohol, like squashes and tulips, delicate hens and fantastic
one-winged ravens – lightly cawing, clucking.” (105).

Are all these figures (birds, butterflies, hens, ravens) vehicles in the metaphors for the hyacinths? The details and proliferation makes it hard to stick these figures back to the hyacinths; instead there’s a flock or swarm of related images. That doesn’t mean that it’s the same as a description of a number of different objects—the comparisonness (the “like”-ness) creates a key component of this weird atmosphere, this transformational ambience: everything is LIKE something else. It is perhaps this beautifully ambience sense of metaphoricity that corrupts the traditional boundary between artifice and natural is broken down. Nature is as weird as the weirdest artifact.

In one of the most striking early poems, the simple gladiola is animated through the estranging metaphors:

The gladiolus is a spear, its edge loaded with carnations, a knife of carnations. It jumps
through the window, kneels on the table; it’s a vagrant flame, burning up our papers, our
dresses. Mama swears that a dead man has risen; she mentions her father and mother and starts to cry.
The pink gladiolus opened up in our house.
But scare it off, tell it to go.
That crazy lily is going to kill us. (29)

The poem starts out by metaphorizing the gladiolus, but as the metaphors multiply it is as if the estranging—the “making strange” —of the metaphors turns the gladiola into a destabilizing, alternative force, a violent otherness that invades and possibly kills the family. Comparisons turns the garden artificial, violent, evil.

As Susan Stewart discusses in her Book of Longing, the diorama aims for timelessness, but history always breaks into the box and ruins it. The garden is Di Giorgio’s doomed diorama. The near-edenic world of the garden is both insular—almost timeless—and (perhaps because of this permutative dynamic) incredibly vulnerable. It seems to block out the world, but the world is constantly invading it. Sometimes it’s angels (as in the poem above) but often they are even more peculiar, mysterious, alluring figures:

When I’m walking toward town, early in the morning, across the meadows with my basket and jars, and the
dew lights its matches and burns all the grass, and the apple tree holds, like heavy, colorful butterflies,
all its apples and pears, now glazed and polished, and all the mushrooms are coated with sugar,
and from the shadow of some tree trunk, from there I see him walking, the stranger, the nocturnal man,
the one with the head of a hare. (99)

The poems remember nightfall—and “nocturnal” figures—because this is when the world is most vulnerable to these strange forces from the outside that are constantly breaking in, and often attacking the speaker (often erotically tinged descriptions).

With its invasions and weird disjunctions, we might say that Di Giorgio’s poems partake in what the late UK blogger and theorist Mark Fisher called “the weird”: “the weird is that which does not belong. The weird brings to the familiar something which ordinarily lies beyond it, and which cannot be reconciled with the “homely” (even as its negation)” (11). Unlike Freud’s “homely” (or “uncanny”), the weird cannot be brought into a system of the family dynamics: it’s fundamentally alterity. Or: “That crazy lily is going to kill us.”

What is “weird,” mysterious, alluring or excessive tends to be rejected and demonized in US literary discourses that tend to value texts based on whether they are “accessible” or not. Going back at least as far back as William Wordsworth decrying “the gaudy and inane phraseology” of poetic diction, Anglo-American poetry has been suspicious of “flowery” language. In one recent column for Writers Chronicle, US poet Gregory Orr argued that flower language is elitist and moderate, un-gaudy language is more “democratic”: “Wordsworth rescued lyric from elitism by saying that the language used in poems isn’t a special, flowery language reserved for special people or a special class of people. Instead, he insisted it was “a selection of the real language spoken by men” (and women).” In a recent column for The New York Times, Matthew Zapruder dismissed writers who “”will throw in a bunch of images and metaphors, right away, before we even know what the poem is about.” These kinds of articles not only return to Wordsworth’s rejection of “gaudy and inane phraseology” but – closer in time – harkens back to the Workshop dictum that writers have to “earn” “the images” in the poems. It’s an aesthetics of moderation masked in the rhetoric of moralism (It’s immoral to go over the top, elastic) that comes out of a protestant-capitalist ethos that wants the accounts to be settled, a ethos to which all art in the end is a scandal. It’s a masculinist worldview that not only values moderation and restraint over the feminine “gaudy” and artificial (afterall, Wordsworth thought the poet was a “man speaking to men,” not a woman speaking to women).
(1. “Foundational Documents and the Nature of Lyric,” Gregory Orr, Writers Chronicle, Fall 2014)
Perhaps trying to avoid the masculinism of such rhetoric Stephanie Burt recently invoked a “nearly-baroque,” expressing appreciation for writing that has a touch of this (feminine) “gaudy and inane phraseology.” However, as with her book Close Calls with Nonsense—which treats “nonsense” as a danger which we want to be close to but not so close we plunge into its dangerous waters—Burt only wanted the nearly baroque. She also stayed safely within US poetry, even though the baroque (and the “neo-baroque”) has been a leading way of thinking about poetry throughout Latin America.

In comparison to US rhetoric of restraint, Marosa Di Giorgio’s poetry is definitely gaudy. She’s not “nearly” baroque: She goes all the way. She doesn’t “earn” her images. She throws a bunch of images at us before we know where we are (or so that we no longer know where we are). It may be then that Di Giorgio’s poetry has more in common with a text like David Lynch’s Mullholland Drive with its portals into different worlds and rabbit-families, or Jeff Vandermeer’s sci-fi “Southern Reach” trilogy with its mutating flower languages, poisonous nature and female specialists. And despite the haranguing from up high, we can also see this kind of aesthetic in a number of US poets – Lisa Marie Basile, Olivia Cronk, Moss Angel, Cynthia Cruz, Sabrina Mark and Candice Wuehle. Nature for Di Giorgio is not a Wordsworthian antidote to artifice but the site of extreme artifice, permutation, evil. She may be a Baudelairean nature poet who truly loves flowers, her garden and the rabbit-headed strangers who appear there. The allure of these poems is so powerful, I want to do nothing but watch these figures appear before me, stranger mutating creatures and plants doing strange things in a strange garden.

Johannes Göransson is the author of six books, including most recently The Sugar Book (Tarpaulin Sky Press 2015), and the forthcoming memoir, POETRY AGAINST ALL. He has translated a number of poets, including Aase Berg, Henry Parland, Johan Jönson, Ann Jäderlund and others; and his book on translation, Transgressive Circulation, is forthcoming from Noemi Press. Born outside of Lund, Sweden, Göransson has lived in the U.S. for many years, and currently lives in South Bend, IN, where he teaches at the University of Notre Dame. Together with Joyelle McSweeney, he edits Action Books.”