Readers: Welcome to the October issue (# 86) of Plume.

October: and as those of you who take this newsletter know, we are up live with our new website, whose attributes I retailed in September. (For more — lots more — on our transition to a new website and new publisher and title for the print anthologies, I refer you to the note at the top of this issue’s The Poets Speak page.)  I do hope you enjoy the experience.  And what better way to kick off this little adventure than with Soren Stockman’s observations on Robert Creeley’s “The Flower”?  This month’s “secret poem” – doesn’t that title seem appropriate?  (I recently came across the word Waldeinsamkeit: the feeling of being alone in the woods, though one is never alone, quite – one’s pain a constant companion.) In any event, a marvelous, mysterious poem that Mr. Stockman manages somehow to further enrich, rather than merely overlay. 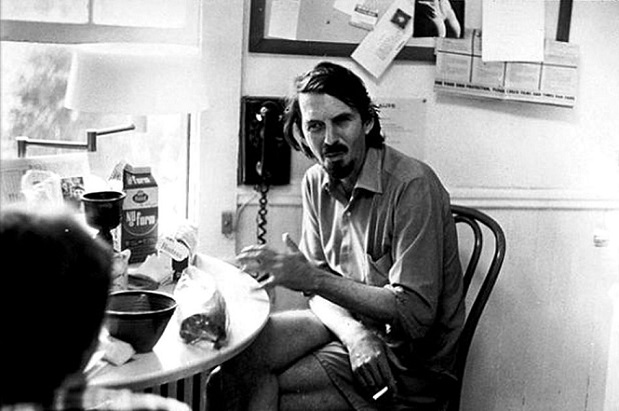 On Robert Creeley’s “The Flower”

Mystery echoes deepest into one’s conscience when its conditions and circumstances are clear and tangible; the poet revealing, rather than creating, the unknowable within the known. Brushing apart momentarily the foliage to reach the clearing, which existed before its witnessing and will remain afterward, which is remarkable for what it is not, and so in turn reverberates the surrounding is. That the unknowable be unadorned with bias so as not to privilege fear in the face of ambiguity. That the known contrast the unknowable perhaps at a slant angle, as in reality the two are not codependent, not day versus night, but instead year in the company of endlessness. And that this frame of the known and felt be delicate so as not to disturb the unknowable by determining one path by which to reach it.

I think I grow tensions
like flowers
in a wood where
nobody goes.

Each wound is perfect,
encloses itself in a tiny
imperceptible blossom,
making pain.

Creeley’s poem opens with a theory of the self (“I think”), one careful not to assume a greater authority than it possesses. Though we are all leading scholars in the field of ourselves, the field is far too grand. Line breaks occur along the fallible and incomplete fault lines of thought: “I think I grow tensions (are they familiar to me?) / like flowers (what do they mean?) / in a wood where (am I alone here?) / nobody goes.” The second stanza pivots toward the visual, burying its significant leap from “tension” to “wound” in the second word of a four line sentence, and retreats from the occupied self to a larger and more objective scope. The word “blossom” includes in its definition both the object of the flower and the state or period of flowering. It is both definitively formed and necessarily transitional, both gorgeous and invisible, and these opposites existing simultaneously as parallel truths allows the traction by which Creeley moves onward from “wound” to “pain.”
The word “pain” occupies the ending of one stanza and the beginning of the next, looming, almost pervasive in such a small space. Creeley immediately opens the word further, and includes within pain that it “is a flower.” Thus the unspoken mystery at the heart of the poem: how is this pain, found at the culmination of tension and wound, beautiful? Are pain and beauty truly opposites, and even if so, do they not exist at once? The poem has trained us well, is self-explanatory, and does not disrespect its mystery by trying to answer or solve it. Rather, the poem becomes animal, looking without the need to understand, and so achieves grace. “The Flower” takes up little space, does not distract from itself, and meanders naturally through its speaker’s mind, before arriving at the stillness of its particular clearing, in which reverberates its particular echo: “like this one, / like that one, / like this one.”

Robert Creeley’s honors include the Lannan Lifetime Achievement Award, the Frost Medal, the Shelley Memorial Award, a National Endowment for the Arts grant, a Rockefeller Foundation grant, and fellowships from the Guggenheim Foundation. He served as New York state poet laureate from 1989 to 1991 and as the Samuel P. Capen Professor of Poetry and Humanities at the State University of New York, Buffalo. He was elected a Chancellor of the Academy of American Poets in 1999. On March 30, 2005, Creeley died at the age of 78.

Soren Stockman’s poems have recently appeared or are forthcoming in The Iowa Review, the PEN Poetry Series, Tin House Online, Bennington Review, Michigan Quarterly Review, The Literary Review, Tupelo Quarterly, Columbia Journal, Southword Journal, BOAAT, Bellevue Literary Review, The Paris-American, and Narrative, which awarded him First Place in the Narrative 30 Below Contest, among others. His prose writing has appeared in Playboy, Kenyon Review Online, The Barnstormer and Fanzine. The recipient of fellowships from New York University, the Ucross Foundation, the New York State Summer Writers Institute, and the Lacawac Artist’s Residency, he works currently at the NYU Creative Writing Program.

And so, briefly, to the news.

First, many thanks to all who participated in – and made such a success of – the Plume Reading at Beyond Baroque in Los Angeles: Plume poets Laure-Anne Bosselaar, Lynne Thompson, Helene Cardona, John Fitzgerald, Suzanne Lummis, Christopher Buckley, Alexis Rhone Fancher, Michelle Bitting, and Elena Karina Byrne. Not to forget the actors who read Plume poems, as well: Darrell Larsen, Leon Martell, Laurie O’Brien, Beth Ruscio, and Carl Weintraub. Photographs from Alexis and Helen are up on Facebook.

Speaking of that next print anthology, I will be sending out query emails for new work in the middle of this month.  Per usual, I’ll be asking for two poems, one for our online iteration and one for print. This time, I’ll also ask that you include a jpeg photo for our new Profiles in the online Plume, and a release form for the poems – should you be so kind as to send! Already, we have a fine start – perhaps 25 poets whose work I have accepted for Plume 7: New Poems 2018 – so named to highlight that rarity for anthologies – all new work.

Next, as has become usual, PLUME will host an AWP reading to promote the next print anthology and the first under our new publisher, Plume 7: New Poems 2018.  This notice is to ask that you consider joining us.  We like to keep things moving, so we are looking for 10-12 poets, reading for 6-8 minutes each.  It’s a format that has worked well in the past — audiences seem to appreciate the range of poetries they are able to encounter in a single sitting, and the burden on individual poets is not onerous.  (And, there is the not-negligible advantage of this format making for an especially convivial scene at the after-gathering at a nearby bar/restaurant, where the first round is on me; you never know who you will meet.)

The venue is a unique space just 1.2 miles from the Convention Center:  CARGO, “Purveyor of Curious Objects.”  Details below.

If you are interested, please email  as soon as possible at plumepoetry@gmail.com

The roster – always stellar, if I can say that — will be shaped on a first-come first served basis.

Our cover art this month comes from Langdon Clay – a wintry scene that seems about right just now, in the dregs of summer. As Allison Meier notes in Hyperallergic:

Taken between 1974 and 1976, Clay’s photographs of the New York City streets have the luminous loneliness of an Edward Hopper painting. Instead of capturing some solitary souls in the Manhattan night, each shot frames one car against its urban environment. Four decades after they were captured, Steidl has published Langdon Clay: Cars: New York City, 1974–1976 with 115 portraits of these cars both beautiful and battered.
“A big tripod, a Leica, a 40mm lens, Kodachrome film and two years of wandering around,” the now Mississippi-based Clay writes in an afterword. “It was photography of the street itself. One car. One background. So simple. Night became its own color.”
Despite the connecting theme of each image, the photographs don’t feel repetitive, with their distinct details illuminated by windows, neon signs, street lamps, and Clay’s own sodium vapor lights. People only appear as haunting phantoms through the long exposures, like the ghost of someone working beneath the hood of a Buick Electra outside Zizka Cleaners, or a man stationed in the lobby of a Park Avenue building while a Mercedes two-door car rests outside.
“They rule the night, those Pintos and Chargers and Gremlins and Checkers and Galaxie 500s and Fairlanes and Sables and Rivieras and LeSabres and Eldorados,” writes author Luc Sante in an essay for Cars. “They unashamedly flaunt their dents, their rust spots, their mismatched doors, their liberal applications of Bondo, their repairs effected with masking tape— but then some of them revel in Butch Wax jobs like you don’t see anymore, gleaming like the twilight’s last sigh.”
Not only do the cars act as time capsules of the mid-1970s, including the Plymouth Fury cop cars and Checker Marathon Yellow Cabs, so do the views of New York City and New Jersey. Clay notes that the Everard Baths, where a curvy Chevrolet Corvette is parked, burned down in a fatal 1977 fire; the Marlin Room in Hoboken where a Cutlass Supreme is proudly parked was closed in 2004 and demolished. Even the sites in the West Village and Greenwich Village, where much of the architecture has remained, have been cleaned up; the graffiti and shreds of wheat paste posters are mostly gone, as are many of the nightclubs, diners, and cafeterias advertising “veal and peppers.” Yet in the photographs the viewer is transported back to these nocturnal moments of the sleeping city.

Finally, as is our custom, some new books from our contributors:

Forrest Gander   Be With

PLUME Lorna Simpson, “Easy to Remember” October, 2020 Welcome to Plume Issue # 110 — October: and I hope this finds you…

Readers: Welcome to Plume Issue # 58 –   May: up early and feeling already…wistful for some reason as I…

Chris Maynard, “9/11, Times Square” Readers: Welcome to Plume, Issue 51 September: and our 51th issue! And our little party catches its…