Yes, November — as noted: its quality almost-ness but not quite, a shadow-month to April, perhaps.

First, congratulations to Jean Valentine (“1945”), Beckian Fritz Goldberg(“Henry’s Song”) and David Kirby (Pink is the Navy Blue of India”) for their appearances in Best American Poetry 2013. The poems noted  appeared originally in our pages.

Circulation continues to increase: we  reached a new high last month with 7000+ “unique IP’s — individual readers. A record which we have topped, in fact, this month, with over 7,500. readers. Soon to be, I expect, 8,000, probably this month.

As for the current issue: David Cudar offers the promised meditation on Julian Barnes.

Our cover art this month comes from a found image on Tumblr: eerie and beautiful.

Our Featured Selection this month comes from D. Nurkse — a troubling and gorgeous long poem that bears multiple readings. And an interesting accompanying interview, in which Mr. Nurkse has much to say. (Thanks to Bryan Duffy for some of the questions.) Newly aboard the Featured Selection series: James Richardson and Lisa Bradford’s translations of the great Juan Gelman.  Upcoming in the series: Chris Kennedy, Rachel Zucker, Hank Lazar, Larry Matsude/Tess Gallagher, and Martha Collins. As always, I would urge you to contact us at plumepoetry@gmail.com if you have a project in mind for this venue — one of our most popular new features.

And, below, David Cudar’s review of Levels of Life, by Julian Barnes. 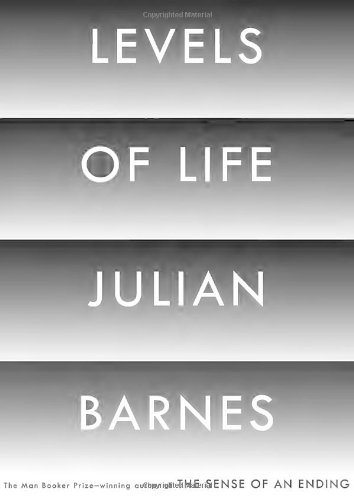 It’s difficult to know where to begin when considering Julian Barnes.  He has established himself as a major voice in contemporary fiction, and this has been true (if not assured) since his breakthrough novel Flaubert’s Parrot (1984).  But there is another side of Barnes that makes him even more distinct, a desire for clarity of introspection.  Barnes likes to consider his subjects through the filter of his own life.  His versatile talents allow him, like Isherwood, to construct his nonfiction into charming and brilliant essays with the most engaging narratives. His nonchalant style lulls reader into ‘listening’ as he unwinds his thoughts, and lately his thoughts have been primarily about death. Initially, this was an abstract, almost academic curiosity. Recently, it has become infinitely more personal.  His book The Sense of an Ending (2011) won the Booker, yet with the loss of Pat, his wife of 32 years, the award couldn’t have come at a worse time.  His newest book, Levels of Life (2013) is a powerful, intimate confession of grief, prefaced by two anecdotes about ballooning in the 1900s. The form of the narrative reinforces the truth of the story. Life, Barnes suggests, is only known after the first pass: we live and then we tell ourselves what we’ve lived.  It is only after the telling that we realize anything has happened.

Six years ago, Barnes wrote Nothing To Be Frightened Of (2008), a meditation or essay on death.  The book is excellent and is suffused with a near child-like wonder at the concept of death. It is playful and digressive, filled with family history and clever insights. Much of the book is nostalgic, with Barnes glancing over his shoulder at own childhood and the deaths he’s been affected by.  The final section of Levels of Life, though concerned with the same theme, is completely different. This book is slower in pace, spare and suffused with melancholy. Rather than considering the various deaths of friends and family, Barnes considers only the loss of his wife. Barnes details the idiosyncratic paths he traced in the wake of her death. Although this is self-reflexive, it is a gentle, Proustian repetition, more concerned with its subject than the mirroring.

The odd bit seems to be the first two sections.  How does a story about photography and ballooning fit into the narrative about the death of Barnes’ wife?  Barnes is honest and vulnerable. He writes with a voice so clear it appears analytic at times. Yet, it is as if Barnes is so upset he must maintain a neutral tone lest all his feelings overwhelm him. When Barnes writes about ballooning, he places us at the birth of Impressionism. This is no accident, for he wants us to stand back and see the pattern as one needs to in order to decipher an Impressionist painting. The patchwork pattern of the book, which blends ballooning and photography into the canvas of grief and death, seems to have little thematic connection. However, it is only when we see the picture Barnes is creating, that the meaning becomes apparent.  Ballooning and photography, altitude and memory, grief and death coupled with the stories of love and loss — suddenly the connections no longer seem missing but obvious and multiple. Things once vague and unclear come into focus.

His wife’s death happened too quickly: “It was thirty-seven days from diagnosis to death.”  Barnes needed to write this, because he needed to tell himself about what happened. We are told in the process.  Levels of Life begins with a two-part story of ballooning and love, each section opening with a variation of the same sentence, revealing both the attitude and the repetition one needs to see the world.  Barnes hides the secret center of his story: that he has finally moved past his grief. The reader must get some perspective before it becomes visible The book is poignant not only because Barnes looks deeply into every fold of his grief — he considers his wife’s death like a tongue probing a sore tooth — but because Levels of Life is the second death of his wife, the one that allows him finally to breathe again. All things die twice: when they die themselves and when they die to us. Although Barnes is glad that the streets are level again, he knows he has not completely recovered. It is this loss of his loss that is truly heart breaking.

Sarah Dunphy-Lelii on “in common” and “gentrify”: I spent five months tent-living at a field site in western Uganda, hiking…

David Lehman: On Stevens, Windows, and Poems in the Manner Of

Photo Credit: Stacey Harwood   NM:  David thanks so much for agreeing to chat with us on the eve of…

Martha Rhodes on “Embraced”: It’s awkward (for me) to talk about my own poems — I can just say that…