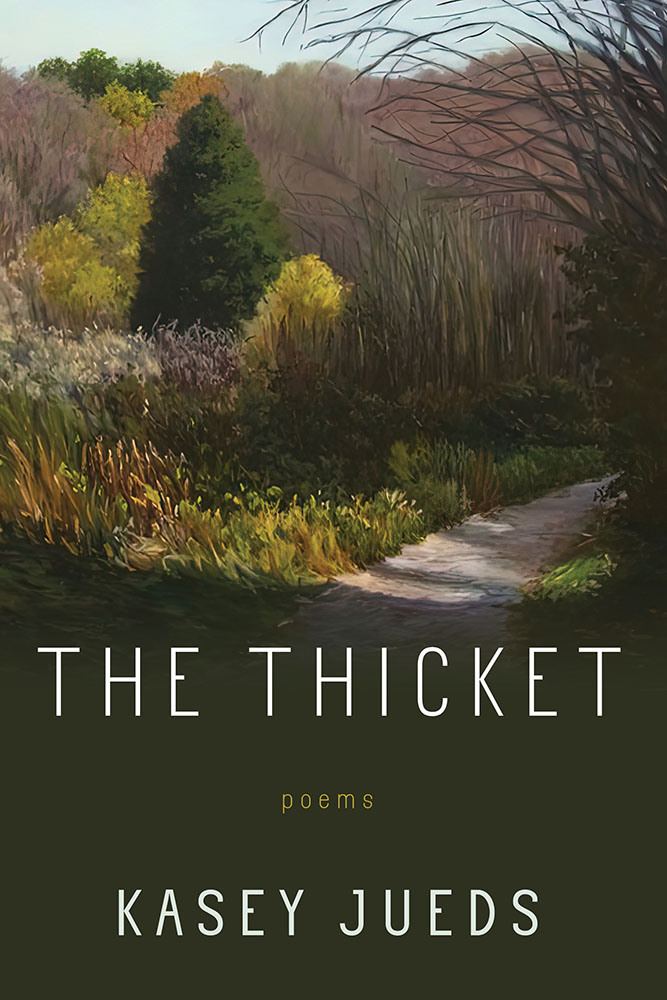 Kasey Jueds
University of Pittsburgh Press (Pitt Poetry Series).
November 2, 2021.
$18
“The thicket / swells with secrets,” Kasey Jueds writes in the poem “Unbidden,” and The Thicket–Jueds’s second collection–“swells with secrets,” too. Into the book’s unassuming shelter the writer slyly packs stories half-told and dreams in shallow focus; she pads them, moreover, with pregnant silences. But the secret that swells inside this volume is not its plot. Nor is the poems’ secret their language or imagery, their allusions or metaphors. The verses, though, glory in all of those.

What, then, is the secret with which The Thicket swells? The best I can do is to say that what expands inside Jueds’s new book is an irreducible reality–a sense that makes memory flicker, a knowing that underscores the distance between a word and what it calls or recalls. The Thicket swells with feelings too pure to name. It swells with what it cannot explicate, with what it cannot contain in the vessel of its exquisite phrases. And, to be clear, that is not remotely a failure. It is gorgeous.

If a bit unsettling. In these poems, after all, metamorphoses are commonplace. The speaker in one poem merges with a “girl with no hands,” red fish splash down the arteries of a “body of water,” and the hems of dreams and fairytales overlap. Ley lines detour invisibly under sidewalks and deer paths. Islands vanish into lakes. Ghosts clatter around the insides of silos, and angels color the air inside tool sheds.

Perhaps, however, summarizing The Thicket that way makes it sound too ethereal when it is, in truth, a book full of sturdy places and objects. The poet’s world is undoubtedly our own, the same world where her first book, Keeper, meets us. In that volume, Jueds sets a poem at the very real “Race Track, Hialeah, FL,” comparing the horse “track’s green center” to

the place on a paper
where, years later, I’d set
my compass tip, careful
to make my circles concentric,
meaning they shared a heart.

In The Thicket, the writer’s comparisons have grown wilier and the place names less specific, but the earth outside the book lives just as insistently on its pages as on Keeper’s. True, Jueds’s latest work does overlay the physical, knowable earth with a second world, a gauzy speculative and retrospective reality. But that second, gauzy world is concentric with the mappable planet. That is, these two worlds share a heart, which is what makes the poems Jueds writes so compelling. In fact, I’ve read only one other book that works the same magic, rendering two geographies with a single heart–one full of known landscapes and landmarks and another that is, as The Thicket puts it, “dreamlike, but […] not / a dream.” That book is Marilynne Robinson’s novel Housekeeping.

But because it is poetry, Jueds’s new collection uses form and syntax in as shifty a way as it crafts settings and characters. For example, the five litanies in this book are unorthodox; they belong not to traditional sacraments or worship, but instead initiate rituals without any set agenda. They lay down anaphora simply to list the “givenness” of things. They make soft chains of plums and fires and streets, of associative memory. And some of the non-litanies in The Thicket, such as “Not all the winds have names,” do a similar finger-knitting, twisting what they loop, so that in the poems’ inexact echoes, grief and gentleness build.

The similarly titled “Not all the animals sleep,” for its part, begins “There is always an away,” which contradicts an earlier verse’s assertion: “There is no away.” The thread between the two hums, I think, with tension, but only because neither statement is untrue. Further, the book’s third section begins with “Looking Back (The Far Field),” while its second opens with “The Far Field.” The Thicket, then, is full of organic puzzles and patterns, full of riddle and resonance. As befits a room made of brambles.

For Jueds’s thicket, as well, surfaces everywhere in this book. It doubles as a hedge, a “suture of briars” around an ensorceled princess’s sleep. At the same time, the poet holes up in the enclosure’s cross-hatching of branch and stem, taking the thicket for an arena suited to the loosest sort of recollection. No wonder Jueds names one poem “The Kingdom” after this “vigilant thicket” […]

hidden is
to be kissed

its tangle
though you may

“Never / to name / its tangle / through you may / name its threads”: I love that, largely because I cannot name The Thicket’s tangle. Its threads, on the other hand, I can (as promised) at least begin to name. One is awe and one familiarity, one beauty, one love, and the list must also include fear and desire and the past and Dusk (the capital letter is Jueds’s). Another thread is the self, and at least one the poet calls “you.”

This inventory of threads notwithstanding, “The Kingdom” is right; these poems do conjure a tangle that I don’t know how to name. Take the end of “Notebook of Air”:

Now you will keep

asking whatever you can
of the one window open above

the alley, its translucent curtain
saturated with lamplight, as if allowing

itself to be harmed
in the gentlest of possible ways.

I do not know how to name that tangle. Nor do I want to comb it out, which testifies to The Thicket’s magic.
So instead let me insist again on the concentric worlds Jueds’s poetry creates. To begin, “Notebook of Air” does take place–unmistakably–here on earth, where there are windows and alleys and curtains and lamps. But it also takes place inside the tangled realm of feeling–specifically, of feeling “suffused,” as the curtain is with light, as the speaker is with longing. And the knowledge that to be suffused, whether by desire or by a lamp’s glow, means consenting “to be harmed / in the gentlest of possible ways”–well, there it is: these two worlds have a single heart.

Let me insist on this, too. What Kasey Jueds has snared in The Thicket’s wonderful tangle, “swell[ing] with secrets,” is nothing less than the heart.

Sean Thomas Dougherty’s Not All Saints Reviewed by Sonia Greenfield

Jane Zwart Issue #132 August 2022
One of the great, disorienting pleasures of C.T. Salazar’s first full-length collection of poems is how little level ground it contains.

Jane Zwart Issue #130 June 2022
In poetry and prose, Lesley Wheeler contends, “the ratio of sound to sense is different.”

Jane Zwart
In an emergency