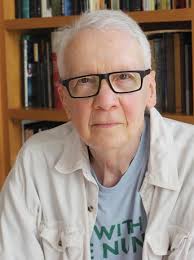 Stuart Friebert, for whose first book of German poems Krolow wrote the afterword, had the great privilege of knowing and working with Krolow on a number of occasions. Enjoying “a lifetime right to translate” Krolow, he has published two volumes of Selected Poems (On Account Of: Selected Poems of Karl Krolow/The Field Translation Series; What’ll We Do With This Life?: Selected Poems by Karl Krolow, 1950-1990/Fairleigh Dickinson U. Press), and Bitter Oleander Press will publish a third volume, Puppets in the Wind, in 2014-15. The author of a dozen books of his own poems, and a number of stories, memoir pieces, essays, and anthologies, Friebert has published six other volumes: co-translations, from the Czech, Italian, Romanian, and Lithuanian.