That Which is Difficult: Poetry at West Point – Matt Salyer

That Which is Difficult: Poetry at West Point – Matt Salyer 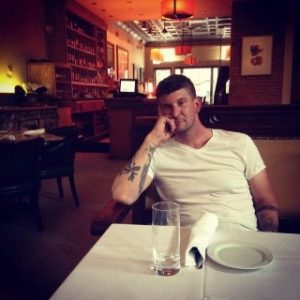 I was sitting on a corniche near the Tigris River watching kingfishers trip and scamper as the looping caw-caw-caw of the loudspeaker frightened them off with a ghost. Past the t-walls, minarets intoned their rival maghribs in a hot breeze that covered Baghdad with red wool dusk. “This is not what I’d planned at all,” I thought. In a month, I will be back at the United States Military Academy where, among other things, I teach poetry. West Point is as imposing as you might imagine. Its ramparts command the narrowing Hudson exactly one hour north of where the Metro North rounds the edge of my familiar ground – Inwood, Marble Hill, The Bronx. If I had a natural habitat, this is it. I live a few blocks from Jim Carroll’s walk-up in The Basketball Diaries, a Dominican tobacconist who grows criollo on the sidewalk, and a shithole called The Liffey II that advertises itself as “The Last Real Irish Bar in Inwood.” Few things could be more at odds with the everyday textures of home than the somber, disciplined patterns of common life at West Point. But if I were to take the A-train an hour in in a different direction, I would find myself equally out of step, tangled in Brooklyn’s arteries where most of my poet acquaintances live. I suppose I could abide my dissonance in there, too, if it paid.

Between classes, I often stand on the roof of West Point’s Thayer Hall, smoking behind the granite crenelations. I sometimes glimpse the splendid, uniform lives of poets on my phone. Someone has published something comprised of surface textures culled from dead friends of the poet’s professors – John Ashbery’s lineation, Franz Wright’s closures. The once-removed as Old Masters. Someone else has published a poem comprised of surprising place-names, references to obscure hand-tools, Victorian brass hinges, and dried flowers. The poem spreads them across several compact lines like a domestic tarot of metaphysical non-sequiturs, the occult life of cats transcribed for an anchoress. Poets X, Y, and Z, in turn, have Instagram-liked both poems. I scroll, see that X has spent the weekend in Hudson. Y is thinking about writing about thinking about fucking while fucking. Z expresses public contrition for writing from a position of privilege, which is a social marker of privilege.

I put down the phone and watch the Cadets route-step below me over stone bridges. Most of them are STEM majors and seventy percent will branch Combat Arms, but with a change of attire, most could pass for new MFA students in Union Square, heading toward the Strand. Like the aspiring, professionalizing poets I overhear on the L, Cadets seem earnest and well-spoken, albeit too concerned at times with the opinions of their peers. At turns, they are equally given to speaking about the world in terms of grand abstractions, but that will pass the more they practice their craft. I watch them scuttle out of the “Cadet Corridor” past monuments and grandiose bronze historical scenes, mute eagles carved in relief, until they vanish altogether through faux Gothic arches. I can smell the wet wool of their gray nineteenth-century uniforms. The river fog holds it over my face. Like all real misfits, I have a nose for customs. I remember my grandfather, who raised pigeons on his fire escape. They would come right to his hand on command, all in a row.

Often, people I meet in the arts imagine that teaching at West Point must be like training my grandfather’s pigeons. Snapping fingers, little coos and trots. Hardly. Cadets tend to be high-achieving, precocious, and idiosyncratic, so much so that West Point’s status as “Sarah Lawrence, with guns” has become something of a good-natured joke among colleagues. This appeals to a small stratum of “Old Grads” who want Henry V, Italian operas, and silver salad forks parceled for Tidewater social etiquette. It equally appeals to clean-cut postdocs at conferences – right-thinkers, regular joggers, occasional readers of Guernica and Jacobin – who fetishize being a humanist in one of the violent trades, however unconsciously. For as Paul Fussell remarks, war is one of those experiences – like great impoverishment, crime, love, or religious ecstasies – that foregrounds “places and situations where literary tradition and life notably transect.” Its narration is thus always susceptible to being devoured by the useless respectabilities. Of course, because I seem, at a glance, more insubordinate than respectable – “it’s my manner, sir” as Peter O’Toole’s T.E. Lawrence would say – both audiences sometimes wonder if there might not be something subversive, almost Gramscian, about teaching literature to soldiers.

If there were, it wouldn’t work well. Cadets are keen observers of social cues from their professors, retracting behind the protective formalities of rank at the first whiff of “agenda,” regardless of its political stripe. It’s easy enough, and they have little social capital invested in the humanities. Nor do they know many people who do. In this regard, they are not unlike the sonnet-parsing farmers that Brooks and Warren imagined as their audience for Understanding Poetry, bare citizens—the sometimes-impolitic habitual tinkerers with complicated machineries that most of us are in our jobs. Unlike most of us, though, Cadets will flat-out ask in public how reading poems matters to future practitioners of their trade.

It’s a sincere question, a vital one. It belonged in the public sphere the first time I heard it in October 2016. I had just been reading Hill’s A Treatise on Civil Power on the train north that morning, and tried to remember the lines, the part where “civil power now smuggles more retractions / than hitherto; / public apology ad libs its charter, / well-judged villainy gets compensated.” I’m never good with verbatim. What rattled out of me, instead, was some approximation of “that which is difficult / preserves democracy; you pay respect / to the intelligence of the citizen. / Basics are not condescension.” Like Hill’s speaker, “I still can’t tell you what power is” and I don’t think poems can, either. But poetic speech can, at its thorniest, frame problems that cannot be reduced to partisan accolades, commodification, claptrap. It can render the crisp shadows of power under the thorns.

But this is work. Like most hard work, it is also humbling, if not downright humiliating. I have grown protective of the opportunities Cadets have for what would be termed “basic” readings of poems – as I am of the New Critics’ faith in the common man or woman’s aptitude for understanding “that which is difficult” – for it was through dog-eared discard-copies of Brooks, Warren and their contemporaries that the working-class boy I was, twice-expelled from high school, learned that he could read Donne, Marvell, Johnson, or Hopkins. For future commanders, I hope that habits of interpersonal expectation, as well as habits of probative reading, will carry with them. For as Hill remarks, so-called “difficult” poetry is “the most democratic because you are doing your audience the honor of supposing they are intelligent human beings,” as opposed to “so much of popular poetry today [that] treats people as if they were fools.” Unfortunately, most academics do not like feeling humiliated. But newly-minted PhDs often have little formal training in poetics, less interest in writing about poems as such, and are thus reticent to engage in “New Critical” encounters with challenging poems. It is easier to remain authoritative defaulting to affective, biographical-historical, and intentional readings.

I suspect this partly accounts for the growing emphasis on “empathy” in literary circles. At civilian colleges, the idea that reading poems encourages this kind of psychological development is often paired with jargon about “composition studies” and ill-defined “cultural competencies,” part of a desperate apologia for the humanities offered to committees of assistant deans. In military circles, the empathy-rationale is sometimes similarly shrouded in operational jargon, yoking it to its supposed use in anticipating the Other’s outlook during complex “small wars” and long military occupations. I do not dismiss the potential value that readers–whether military or otherwise–find in empathizing with others, although it is worth noting that the concept entered the English language little more than a century ago, a British psychologist’s best attempt in faux-Greek to translate the German word einfühlungsvermögen, or “feeling into.” What I do doubt, both as a soldier and a poet, is the idea that empathetic introspection is either an intrinsic moral end or metric of aesthetic worth. In modern Greek, the word the doctor borrowed, empathaia, means “malice.” Feeling-into is fickle like that.

Since the fall of al-Baghdadi’s Caliphate, traces of the sweet domestic lives of Daesh had been left scattered and exposed from Mosul to Ramadi, pictures of contented infants asleep on their strong father’s chests, of groups of friends and cousins laughing and joking, of young men listening to conch shells with trousers rolled high, barefoot in the beautiful water that runs abreast the Ninewah plains. Here is one from al-Qaim or as far south as Rutbah, holding aloft two of the most beautiful green limes for the camera. He has the most perfect expression of childlike delight at this abundance, and it is easy to empathize with him regardless of his cause. He could be beloved. The next moment, he is in a different picture. There is another man with him. The second man is bound at the wrists and ankles with thick rope, and the one you have been “feeling into” is now slitting his throat like a lamb. He has the most perfect expression of childlike delight at the abundance of blood. One is no less true than the other for the man slitting his victim’s throat.

A paradox does not resolve in empathies, but in ‘that which is difficult,’ as difficult as the small, furtive, splendid, fearful animals we are, prone to the knife.

Matt Salyer is a poet and a professor of English at West Point. A native New Yorker, he earned a PhD from the University of Connecticut.

Matt Salyer is a poet and a professor of English at West Point. A native New Yorker, he earned a PhD from the University of Connecticut.