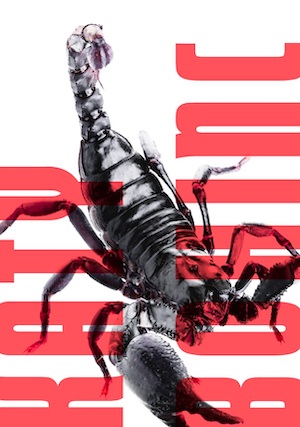 Ralph Waldo Emerson described “the poet” as one who saw through appearances, and made that seeing-through itself apparent to their readers: “He is the poet,” Emerson wrote, “and shall draw us with love and terror, who sees, through the flowing vest, the firm nature, and can declare it.” He followed this description with the laconic sentence, “I look in vain for the poet whom I describe.”[i] So too Katy Bohinc who is a poet deeply skeptical of poetry, specifically of the lyric and its presumption of synecdochic representation of humanity:

I looked to the streets for poetry
Hoped that one day the guardians
Of our streets, the lovers in our prisons
The lyric homeless black man would
Not need my change anymore

As has become common in the poetry of our era, in Bohinc’s Scorpio a kind of liberal bien pensant persona is scorched and excoriated again and again. In some other poets’ work this can come across as reflexive self-laceration, mere virtue signaling; Bohinc’s writing is richer and thornier than that. In her previous book, Dear Alain (Tender Buttons Press, 2014), she performed a feminist restaging of the ancient quarrel between poets and philosophers in a series of darkly ironic love letters addressed to the French philosopher Alain Badiou. Bohinc is a trained mathematician, an astrologer, and a human rights activist—bona fides that add up to a volatile mix of Enlightenment rationalism and Romantic yearning. “I want,” she writes in the poem “Hung Out”—it is a refrain from Dear Alain—“a literary song.”

This book, Bohinc’s third, is a collection of lyrics stemming, the author has said, from her experience working for a human rights group in China. But this does not mean the book is any sort of travelogue; rather, Bohinc has said that she sees in China, with its authoritarian government and trashed, toxic environment, as a kind of snapshot of the future of this country. Language in these poems tends to hover and warp itself between recognizable remnants of the lyric—the blues in “Ohio,” trobar clus in “Again”—and the drained authority of officialese, represented by the use of small caps in poems like “The Center Vapor” and the tour de force longer poem near the book’s beginning, “Kernels,” which contests on the most literal level poetry’s ability to contain the humanity it ought to represent:

Well who wrote history
and fuck them

No narrative knew
the anchor of you

In three “kernels” or stanzas the lyric (with its short lines), history, and narrative are dismissed as soon as they are presented, all forms of writing inadequate to the task at hand. Yet the preservation of “the anchor of you” signals a kind of forlorn faith in the lyric task of preserving the image of the person, as beloved “you,” against the devouring and solipsistic I, which is nonetheless necessary to writing. Or as the speaker puts it plainly in “iPoem,” reprinted here in its entirety:

How do you defend You without the word I?
Missiles swell our hopscotch square so blind broad
We leans lonely out there
Could we get much higher?
Could I love without
I? No, really,
Eros
Could I?

The pronoun play here destabilizes the I-thou relation of lyric, putting existing subjectivities into question while leaving open the question of “Eros” as more creative, potentially, than the poem itself. That suspended eros underwrites the banal flatness of many of these poems, a post-Flarf affect that seems a deliberate attempt to deprive the lyric of its aura, as though to scientifically, drily, and precisely present the image of the lyric as paramount in its virtuality without the distractions of beauty. Bohinc’s critical anti-lyric finds its apotheosis in “Cotton in Advil,” a poem dedicated to Frank O’Hara that tears down the figure of O’Hara as a kind of secular saint to name-check but who has become in certain quarters (c.f. Mad Men[ii]) an ironic emblem of conformity:

Ran into the arms of
Frank O’Hara, his poems, the easy
Ones you can always keep on hand

We ate heart that night, sweat
Soul. You said “you’re a good person”
Like you’d never met one before

But beauty is not so easily evaded by a poet of Bohinc’s gifts: “Dear baby,” she writes at the end of “Hung Out,” “I have an unfortunate thriving toward symmetry.” And as the collection progresses the “deep tristesse” from which the poems emerged makes itself felt in increasingly frequent flashes of sincerity, expressed in the questions that punctuate “Jerusalem”: “Where is the line between imagination and communication?” and “Where is the boundary / Between emotion and words?” That fatal line, that boundary (which the title of the poem inescapably recontextualizes as the line between Israel and Palestine) is the line between actuality and possibility, a line containable by no existing discourse. Poetry’s esoteric quality is the key to this necessary transcendence, but that same esoteric quality tragically limits its readership and effects. Bohinc has fun with this, too, beginning the poem: “I’m young and still pedantic, what can I say?” This is another echo from Dear Alain, in which the poet mischievously describes her one-sided dialogue with philosophy as “rap for academics.” Still truth (and beauty) must be pursued, even under cover of irony; and anyway, as Dear Alain and Scorpio both show, irony is not incompatible with eros. Bohinc’s stance in these writings remind of Roland Barthes’ most characteristic gesture, as elaborated in a passage from A Lover’s Discourse:

“Yet to hide passion totally (or even to hide, more simply, its excess) is inconceivable: not because the human subject is too weak, but because passion is in essence made to be seen: the hiding must be seen: I want you to know that I am hiding something from you, that is the active paradox I must resolve: at one and the same time it must be known and not known: I want you to know that I don’t want to show my feelings: that is the message I address to the other. Larvatus prodeo: I advance pointing to my mask: I set a mask upon my passion, but with a discreet (and wily) finger I designate this mask. Every passion, ultimately, has its spectator.”[iii]

The hiding must be seen. The poet is one of the two that in Badiou’s system can together perform the truth procedure of love. The reader, presumably, is the other. But poetry is at its most sincere when it refuses to perform sincerity—when it puts its sincerity, its eloquence, even its beauty under erasure, to be uncovered in the moment of reading—a moment of truth.

The full effect of Bohinc’s Scorpio is delivered by its structure; though the table of contents presents an apparently undivided assortment of poems, the experience of reading reveals something cannier. The first “poem” in the book is nothing other than the word “Water?” alone with its question mark on a white page. And the last poem, which is a real poem, is titled “Water”—the answer to the book’s question. Water in the poem turns out to be a fluid figure for maternal care, as represented in a pair of monostichs:

The speaker of the poem is traveling in an airplane, home to New York City where her mother, or maybe Mother Earth, is dying. She longs for care, to give and to receive it: “to be kept in / a way, in a box, an adjectival box.” The medium for this care Is not only water, then, but language, which is capable of overflowing its bounds, sometimes in political ways: “Malcolm X he was / in a box too when he had his thoughts his thoughts that would be his Malcolm X.” The chiasmic structure of Bohinc’s sentence is a box that exceeds itself—like Barthes’ mask it is a boundary that is meant to be overcome. And the poem ends with a striking anecdote:

It was gunna end but this orgasm keeps
going it’s not over not over yet baby keep going baby. My brother the
doctor
said “I ask myself what would you do if this was mom and then
I think harder. I realized
she needed fluid” and I thought “that’s it
that’s communism.” & all she needed was water.

For Bohinc, Eros is a punctum or syncope in history, which transforms itself through the figure of “My brother the doctor” of agape, and thence into the political, “communism,” for which the maternal water is the ultimate figure. The poem, and the book, thus ends on this note of hope. But not so fast—there is actually one more poem, a “hidden track” as befits “rap for academics,” called “Endgame.” One of the longer poems in the book—five pages, in a single column of short lines—“Endgame” rehearses with remarkable economy the ambitions and fears of post-Language poetry in the face of world crisis. “Time is up, bitches,” Bohinc warns:

So the poem, and the book, really ends with an affirmation of love that undermines itself on the level of biology. What is all this writing good for except for a brief boost, a momentary alteration in brain chemistry?

Bohinc is a heroine of the new lyric communism—a movement in and for poetry that breaks apart the barriers between people rooted in the subjective I—that explodes lyric for the sake of making contact with the abject and excluded. Or as Bohinc puts it in an essay, “poetry is the fearlessness to depart from the position of the self in relation to all that is present in and up to that moment each poem is born.”[iv] This is a poet, in other words, of fierce vulnerability, though the bristling postmodern textures of her lines may prevent that from being immediately apparent. It is this vulnerability that she presents to us as a potentially revolutionary force.

Joshua Corey is a poet, critic, novelist, and translator whose latest book, Hannah and the Master, is forthcoming this fall from Ahsahta Press. His other books include The Barons (Omnidawn Publishing, 2014), a poetry collection; Partisan of Things (Kenning Editions, 2016), a new translation, with Jean-Luc Garneau, of Francis Ponge’s first collection of prose poems from the French; and The Transcendental Circuit: Otherworlds of Poetry (MadHat Press, 2018), a collection of critical prose. With G.C. Waldrep he co-edited The Arcadia Project: North American Postmodern Pastoral (Ahsahta Press, 2012). He lives in Evanston, Illinois and teaches English at Lake Forest College.
Plume: Issue #95 July 2019

Joshua Corey Issue #89 January 2019
What do you want? What would make you happier?