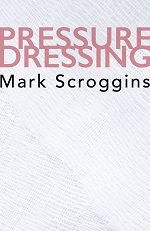 “The story is consolation” in the title poem of Mark Scroggins’ Pressure Dressing, a bleakly funny meditation on the terrors and disappointments of middle age. Centered on the mostly male decaying body (with the figure of a dying-then-dead father continually rising in the background like a baleful moon), the speaker of these poems is the latest and maybe wryest incarnation of a supposedly superannuated suburban white middle class type. Like Richard Ford’s Frank Bascombe or a John Cheever character, or like the insurance man Wallace Stevens caught in a sublimity slump, this speaker finds himself discomfited by his comforts, unassisted (though not unamused) by the erudition he brings to bear on the midlife calamities of failing health, dying parents, career ennui, and most painfully, a desire whose momentary quickenings serve only to highlight the predominant sense of deadness. Consider this stanza from “Pressure Dressing,” which could represent the anxious address of a lover or the cares of an ill-trained massage therapist:

What do you want? What would make
you happier? Is it there? Do you want
me to turn this way, around? Is it
too dry? Prickly? Too rough? Is this
surface too slick, this corner too
shiny? Do you want to forget some-
thing, or remember, maybe? Is
it too soft this time around? Should
I turn it down? Again? Does this
make you uncomfortable? Too much?

Squirmy with enjambments, and of course a kind of ars (or sollicitus) poetica, here the speaker probes insistently at the wound to which, it would seem, no sufficient pressure can be applied; it goes on oozing its cloyingly palliative language, availing nothing but the hypocrite reader’s uneasy recognition of the scene. “Do you want to forget some- / thing, or remember, maybe?” The question’s haunting interchangeability is a sign of the speaker’s time in life, in which regret becomes indistinguishable from a horizon of rapidly diminishing expectations. The past is a much-painted-over canvas, while the future is a series of unanswered and apparently unanswerable questions: “What would make / you happier?” Elsewhere in the poem the speaker invokes Freud, wondering “when, as we trudge forward, does / neurotic misery finally become ordinary / unhappiness? And what did I / really mean when I said what I / thought I meant?” As though words could ever add up to meaning; as though meaning what one said were sufficient to achieve even Freud’s disillusioned definition of psychological success.

In the self-mockingly elegiac stanzas of “Pressure Dressing,” ten-lined stanzas are paired with one another, eyeing each other with mistrust from the top and bottom of each page—hold the book open and it presents to the eye a quadrant, four freestanding lyrics whose connection is sustained less by narrative or argument than by a subtle mood a hair’s breadth’s shy of resignation on the one side and defiance on the other. Eliot self-deprecatingly dismissed The Waste Land as “merely a piece of rhythmical grumbling.” Without the least deprecation—rather the opposite—one might describe “Pressure Dressing” in much the same way: the accumulated experience, verging on wisdom but never claiming to be wisdom as such, of a poet acutely conscious of having more life behind him than before him. “The poem,” remarks the speaker in one of the title poem’s innumerable détournements of the chestnuts of High Modernism, “is the cry of its / accumulation.” Which is only a step away from the “cry / of acculturation”: but what is culture, especially literary culture, good for in an age barely conscious of its own state of degradation?

“Ha-ha to the old men,” the speaker sneers, “pretending / to be Lear, pretending to be / Falstaff. I know it’s Poloniuses / all the way down.” Yet even as Polonius, or as the denizen of that “old ivory tower… where the silverback / squats,” the wounded speaker of these poems dares to be that most unfashionable of objects, the representative man. That character emerges most sharply and sardonically in the poems in the book’s first section, which might very well have been titled “The Adventures of Florida Man” (Florida Man being a popular meme for pretty much all that’s awkward and awful about masculine doings in the Sunshine State). Though he has relocated to the Northeast, Scroggins spent many years living and teaching in Florida, and the fetid funk of our strangest state hangs miasmically even in a poem like “Suburban Urbane,” in which a landscape of faux-sophistication (where “The Klees and Hirsts, Koonses and/ Kandinskys, all demanded / their requisite twenty-five seconds / apiece”) roils with psychic and subterranean menace: “Somewhere / under the reservoir, divine vengeance / uneasily stirs, ripples out and sloshes / into the basement’s storage cages.” Is this dread or a species of wishful thinking? The political satire of poems titled “Sarah Palin” and “George Bush” curdles into recognition as the speaker of the latter implores “help me extract the obscurity / from my father’s gates”—as though the mysteries of modernism were inextricable from Oedipal mysteries of our nation’s governing class at their most hapless and vicious. Meanwhile, the speaker of “Spinning Class” does not stand his ground so much as spin his wheels in the vaguely humiliating posture of a prosperous suburbanite haunted, like Macbeth, by time’s irreversibility: “Sleep / no more, the light is gone / and stiffens the flush / of morning.” “Have you seen,” the speaker sighs at poem’s end, without help of question mark, “my wind.”

I realize I’m making the book sound dreary when it’s actually anything but: Pressure Dressing is a knowing romp through the decayed gardens of English and American poetry, with the tensile snap to its lines that I’d expect from our foremost scholar of Zukofsky. Yet Scroggins’ erudition here is lightly worn, even casual; these are, to invoke the dreaded A-word, perhaps the most accessible poems he’s written. Accessible in the sense of inviting ingress, into the mind and far-from-desiccated heart of a “happy ironist” of unmistakable humanity, always on the verge of that rarest and most ethically demanding of achievements: self-forgiveness.

Joshua Corey is a poet, critic, novelist, and translator whose latest book, Hannah and the Master, is forthcoming this fall from Ahsahta Press. His other books include The Barons (Omnidawn Publishing, 2014), a poetry collection; Partisan of Things (Kenning Editions, 2016), a new translation, with Jean-Luc Garneau, of Francis Ponge’s first collection of prose poems from the French; and The Transcendental Circuit: Otherworlds of Poetry (MadHat Press, 2018), a collection of critical prose. With G.C. Waldrep he co-edited The Arcadia Project: North American Postmodern Pastoral (Ahsahta Press, 2012). He lives in Evanston, Illinois and teaches English at Lake Forest College.
Plume: Issue #89 January 2019

“Blogspot was our Montparnasse” – Robert Archambeau The era of poetry blogging was a brief one, more like a moment…