Amish Trivedi’s second full-length collection takes its epigraph from Joseph Ceravolo, who assembled Transmigration Solo, a collection of his earliest poems, by intuition and feel. “Whether I chose [the poems] for contrast or for similarity of mood, I don’t know,” Ceravolo writes, “but I felt a brewing of diverse particles into the whole.” This Lucretian image reminds also of Jack Spicer’s insistence that “Poems should echo and reecho against each other. They should create resonances. They cannot live alone any more than we can.” In this school or eddy of the American grain, a counterweight to the frontier spirit of rugged individualism, poetry and specifically the collection of diverse poems represents a kind of pragmatic community of voices, echoes, solutions in the chemical sense. But can poetic community suffice in the face of hard divisions in the world inhabited by actual readers? The poems in this book were written before Trivedi relocated from the East Coast to his present home in central Illinois, and before the 2016 election seemed to solidify our nation along irreconcilable lines of difference; the strange prophetic sense of déjà vu that they convey to the reader stems from the poet’s immersion in two seemingly incommensurable slices of Americana, the life of Abraham Lincoln and the careers of our most notorious serial killers. What Trivedi so acutely puts on display, therefore, is not so much a poetic community as the commerce between the better angels of our nature and our worst demons—a troubled reframing of Whitman’s smug and airy “Do I contradict myself? / Very well then I contradict myself. / (I am large, I contain multitudes.)”
The book is divided (naturally) into two sections. The first, “Ann Rutledge in the Dark” takes its name from the figure of Abraham Lincoln’s alleged first love (portrayed so winsomely by Pauline Moore in John Ford’s 1939 film Young Mr. Lincoln), who died young, dooming in our sentimental vision the sixteenth President to the humane melancholy for which he is so beloved. Fate manifests in the poem of the same title as “events in series / building to no space // in particular.” Trivedi’s Ann Rutledge, like Olson’s Ishmael, takes “SPACE to be the central fact to man born in America,” disconnected from any sense of meaningful historical time. As the poem concludes:
But elsewhere
I’m thinking I must be on my way

out during daylight
because suns point

no matter where you want
to be and

If your—or our—relationship to motion has changed, does that not suggest that the modernist Einsteinian conflation of space and time has itself come undone? Like Vonnegut’s Billy Pilgrim, the poems in Trivedi’s collection have come unstuck in time while remaining stuck in place (or space), without any sense of historical narrative or drive to give them—or us—purpose. As Trivedi mordantly remarks at the end of another poem from the first section, “When the Whip Comes Down”: “your // relationship to your / paralysis has been renewed.” That’s why Trivedi’s readers won’t be able to avoid seeing Donald Trump—a serial killer of historical and political norms—in “Manifest,” the poem that leads off the second section (though 45 was, Trivedi swears, in no way on the poet’s mind):

Lines that form
the right side of your face
want to take me away.
Each inch is covered
in creases and I think
the room wants to sleep
with you. My relationship

faces and making
arbitrary lines
and separating families
with borders.

Progress is unimaginable; history hovers just out of reach. “With no sense of place,” Trivedi writes in another poem, “we / still see city lights / instead of stars,” only to conclude: “All lights are out / tonight but there’s no real / trouble in the heartland.” The uneasy quietude of that ending is belied by the poem’s title, “Starkweather”—its speaker is Charles Starkweather, the teenage murderer of eleven people in the “heartland” of Nebraska and Wyoming, whose career would provide the inspiration for Terrence Malick’s terrifying beautiful poem of a film, Badlands. Starkweather returns in “Caril Ann on My Lap”; Caril Ann Fugate was Starkweather’s fourteen-year-old girlfriend and accomplice, conjured so memorably by Sissy Spacek in Malick’s movie. The poem is spoken by Caril Ann herself from her deadly perch on her lover’s knees: “I guess I / was just bored and he was // exciting”; she likens her amoral spree-killing beau to “the President or something.” “Every distance is nowhere,” the speaker concludes, and it’s impossible not to see that nowhere in the mind’s eye as Malick evokes the gorgeous immense inhuman landscape, criss-crossed by gleeful murderers. “I spell it large because it comes large here,” Olson writes. “Large and without mercy.”
Each section of Trivedi’s book is comprised of mostly brief lyrics, but each ends with a longer poem written in couplets. The title of the first longer poem, “Cincinnatus,” implicitly likens Lincoln to the Roman statesman who voluntarily relinquished power and returned to his farm after the nation’s crisis had passed; of course his assassination meant that that pastoral return could never take place. The speaker of this poem begins in ironically diminished circumstances:

This is my
urban decay: one

hand giving power
away, and the

other getting
back home and

getting on the
couch.

“I don’t / believe in promises // or change,” our disillusioned antihero tells us, “because / I know my relationship // to desperation / is growing like // cancer in our lust.” There’s something a little bit campy about Trivedi’s Cincinnatus; I am reminded oddly of the persona adopted by Elton John in the song “Goodbye Yellow Brick Road”: You can’t plant me in your penthouse / I’m going back to my plow. But there’s real bitterness in this poem, once again appearing uncannily prophetic by virtue of its attention to history:
Thanks

for sending your most
spiteful sons-a-bitches:

over himself (his
corpse is American-

Without a sense of history, we’re left with means of associating that are purely tribal and local, rooted in ignorance: “We all could / use a flatter Earth tied // around our waists and / pulling us in close for // a kiss.” The poem concludes in despair: “I’m / too lost to tell you, // know anything / at all.”
If the second and final poem of the book, the title poem, has anything more hopeful to offer, it is only the pessimistic hope that comes in the retreat from public life—a retreat more complete, if no less equivocal, than that of Cincinnatus. “Having nowhere to go / is the best place to be,” our speaker proclaims—a speaker that I read as being much closer to Trivedi himself. “All anger begins new life // as damage,” he writes, and shrewdly diagnoses the 21st-century failure of progressive political will: “I feel nothing changes / by will: only trauma // brings crisis to boil.” In the absence of citizenship, much less heroism (Olson’s nostalgic polis equated these things), we are atomized, “spinning and twisting // to cover void-made / static.” “Physics,” the speaker goes on, “is the study of time // being replaced / with nothingness and // encrypted.” It’s this encryption that is poetry’s work, akin to Auden’s “way of happening”: “We // cannot ask to be brought / anywhere, but we can hope // to be somewhere.” That somewhere is really “nowhere all the time”; it takes considerable skill at alchemy to extract hope from Trivedi’s uncynical despair. Perhaps it simply takes the strength to face facts? But I keep returning to a prose poem from the first section of the book, “America.” “‘I’ve said this before and I’ve said it before,” it ends. And the first sentence? “One more nightmare and I’m out.”
The famous opening line of Olson’s Call Me Ishmael is prefaced by a thumbnail sketch of the story of the Essex, the ill-fated whaler whose story would provide the inspiration for Moby-Dick, a story in which shipwrecked men eat one another. “In his last years,” Olson writes of Owen Chase, who survived wreck and cannibalism and came home to Nantucket at last, “he took to hiding food in the attic of his house.” Trivedi writes: “unfortunately, / we cannot set ourselves apart // and must find a way / into belonging.” Cannibalism and self-devouring are our only alternatives to the meaning of being numerous; Your Relationship to Motion Has Changed is a bleakly witty warning against this fact. 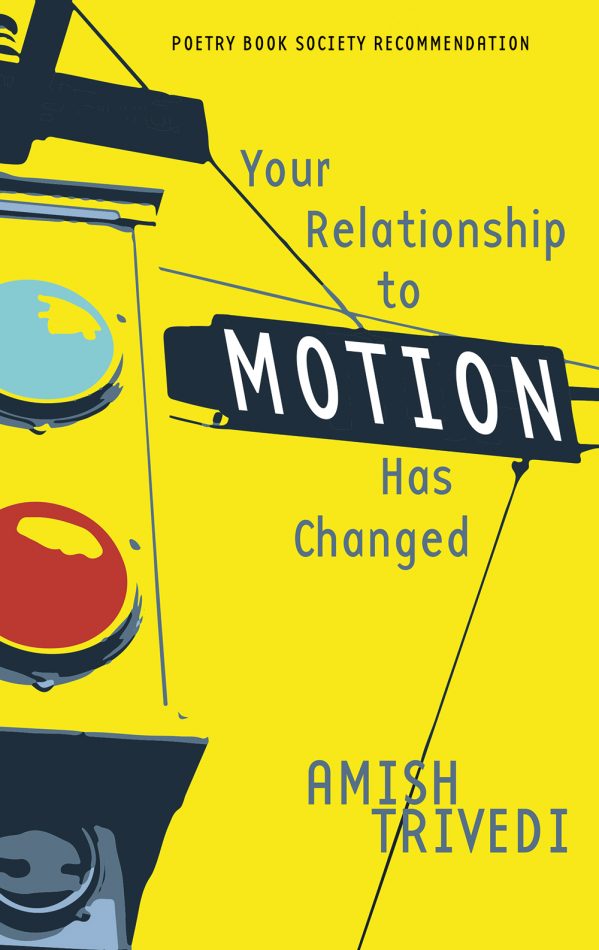 Joshua Corey is a poet, critic, novelist, and translator whose latest book, Hannah and the Master, is forthcoming this fall from Ahsahta Press. His other books include The Barons (Omnidawn Publishing, 2014), a poetry collection; Partisan of Things (Kenning Editions, 2016), a new translation, with Jean-Luc Garneau, of Francis Ponge’s first collection of prose poems from the French; and The Transcendental Circuit: Otherworlds of Poetry (MadHat Press, 2018), a collection of critical prose. With G.C. Waldrep he co-edited The Arcadia Project: North American Postmodern Pastoral (Ahsahta Press, 2012). He lives in Evanston, Illinois and teaches English at Lake Forest College.
Plume: Issue #94 June 2019

Joshua Corey Issue #95 July 2019
Ralph Waldo Emerson described “the poet” as one who saw through appearances, and made that seeing-

“Blogspot was our Montparnasse” – Robert Archambeau The era of poetry blogging was a brief one, more like a moment…