CAConrad: While Standing in Line for Death

CAConrad: While Standing in Line for Death 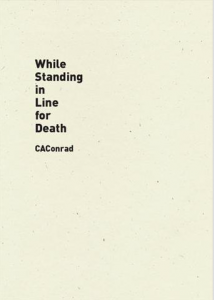 Best known for the “(soma)tic” rituals that serve as the source materials for his verse and prose poems, poet, critic, and editor CAConrad is the embodiment of that old Whitman saw, a materialization of self-contradiction. In other words, he accepts, and thus enacts, the charge of the historical avant-garde: inaugurate the impossible as the negation (as if) of the world (as such). For example, in one of his more positive (not to say, positivistic) moods in “Check Your Dark Traffic,” he writes, “time is the illness we remedy by / imagining the yet unlived.” However, this glimmer of possibility is immediately undercut: “a tremor of sorcery we / give one another to / soften panic in / the seam” (65). In case you skipped over the title, While Standing in Line for Deathis a dark, brooding book that only begrudgingly offers its consolations, the brief pleasures possible for all living things. To that extent, this book may indeed “soften panic” but that doesn’t mean it ever stops flashing RED ALERT! The global, national, and personal stakes cannot, for CAConrad, be sidestepped. This is a poetry “too urgent for punctuation” (24), at least for the writing rendered in stanzas. Nonetheless, or perhaps because of its stance toward the world, While Standing in Line for Deathdemonstrates that CAConrad is, in the end, a poet of defiant joy, straddling the line between self-indulgent cynicism and simpering happiness. He is a poet who fiercely embraces impossibility as the very condition of the hard-won anger and despair raging through this book.

So how is the impossible rendered “possible” by CAConrad’s invocations of (soma)tic rituals? As indicated by its parenthetical rendering, the (soma)tic ritual bleeds into the social and public spheres as a spasm (a “tic”) under no authority, be it legal, moral, ethical or, in the first instance, biological (i.e., hygienic). At the same time the tic, seme of an uncontrollable body, appears in public as pop-up acts of private memorialization (e.g., the opening section of the “Earth” poems is dedicated to his murdered partner, who went by that name) and civic activism (e.g., “I occupied a street a busy street in Asheville, North Carolina to bless children with bubbles that will make them queer,” p. 36). Though each (soma)tic ritual is the occasion for its transcription into a poem (“I took notes” is a recurring motif), ritual, however premeditated, is subservient to chance: “The best rituals are when the unexpected inserts itself” (40). In these samples from some of his prose poems, the words “occupied” and “inserts” point to the public and private, external and internal, spheres, their boundary the body of the poet. CAConrad’s (soma)tic rituals make him a scout of all the Occupy movements whose heterogeneity cannot be recuperated into the fold of a politics despite their overt political contents. Put another way, the queering of traditional politics leads CAConrad not only to the metaphysics of the misanthrope (e.g., “we went AWOL years ago/ a different interior location” [95], and “we are going to find/ in the planet of blue/ a freshly written eviction note/ gone fishing for better tenants” [121]) but also to the metaphysics of its dialectical twin, the philanthropist. Embracing contradiction, CAConrad takes up both positions in a dream of depoliticized permanent revolution: “How do we create a kind, generous, but disobedient world?” (70)

As for the verb/noun “inserts,” ritualistically introjecting materials into his body by mouth and anus points to another manifestation of the impossible: CAConrad’s desire to return to a pre-Oedipal phase, perhaps pre-mirror stage, of undifferentiated existence before the subject/object chasm opened up by language acquisition facilitates his subsequent interpellation into the Symbolic Order. Thus the (soma)tic rituals shuttle back and forth between pre- and post-orders/stages, as though building momentum for a slingshot launch “after” the world as such (e.g., to be suicided by society like Earth (partner and planet), to imagine a planet without humans, etc.) or back “before” the world to an amniotic pre-consciousness. Both centrifugal and centripetal tendencies are yoked together in the first paragraph of “My Faggot Kansas Blood Confessions to the Earth,” just as the current planet and his former boyfriend are fused in that last word. Here are the last four sentences of the first paragraph:

My mother ate food grown on this land when I was inside her, we drank from the
same aquifer; the sky was as big as it is today. I took notes for the poem. I dug a
hole and deposited shit, piss, vomit, blood, phlegm, hair, skin, fingernails, semen,
and tears, and in that order. I apologized for being alive. (43)

The radical excretions of bodily materials, the removals of portions of its outer defenses, are compensated by the insatiable ingestion of words: “To taste a word like a poet, not just to use it to construct sentences but to understand how it enters the body and what it does once it has made its way in us.” This opening injunction of “Flying Killer Robots: The Renaming Project” reminds us of the materiality of language, the ways it binds itself to our guts, our brains, and thus affects our behavior, our psychosomatic health. Rather than intoning “OM,” the fashionable mantra of New Agers, CAConrad stands on the corner of Sunset and Alvarado in Los Angeles and leads a chorus of passersby in a rousing chant of “DRONE,” defusing that “soft sense of war” that “infiltrates our bodies” (57). Insofar as language is both poison and remedy, one understands the desire to banish it altogether, to retreat to a kind of (misinformed) Buddhist metaphysics of silence. But since “they” (for CAConrad, as for Ginsberg, they are “America”) have no intention of surrendering their weaponized languages (e.g., fake news), he has no intention of embracing quietism, religious or otherwise.

If there is a Gay Arts Movement along the lines of the Black Arts Movement, CAConrad might well be its Amiri Baraka (and yes, I’m aware of the ironies of this analogy), an uncompromising linguistic force few can reckon.

Williams’s work draws on a variety of sources to challenge and investigate language, history, and race. In an interview with the Volta Williams noted, “I don’t ‘revere’ the English language but I use it and, on occasion, abuse it.” And of his interest in grammar and linguistics, he stated: “every grammatical marker is purposeful … every torque of the language renders ‘meaning’ problematic—which seems to me the precise ‘condition’ of African-American existence in particular and ‘American’ life in general.”

Williams is the editor of African American Literature: Revised Edition (2008). He teaches at Xavier University in Cincinnati.