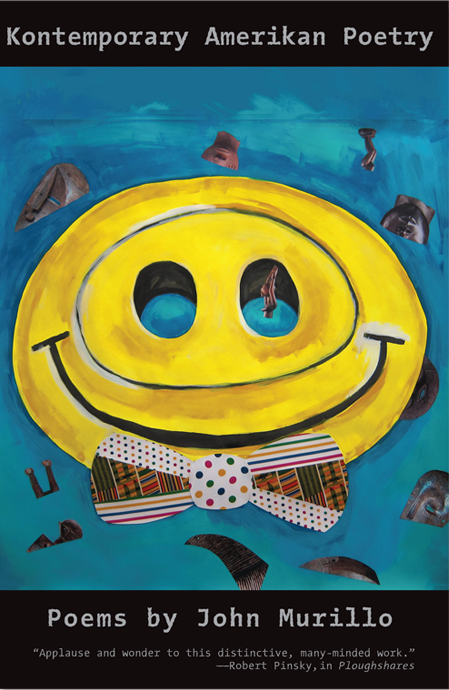 Kontemporary Amerikan Poetry, John Murillo’s second collection, is a particularly American lamentation, an extended meditation on loss: the inevitability of some losses, the tragic nature of others, and especially the political and existential crisis of loss inflicted on Black American selves and communities by our culture.

The second poem in the collection, “Variation on a Theme by Elizabeth Bishop” begins, “Start with loss. Lose everything. Then lose it again.” The second and following lines sound like they were lifted straight out of a blues song:

Lose a good woman on a bad day. Find a better woman,
then lose five friends chasing her. Learn to lose as if
your life depended on it. Learn that your life depends on it.

In The Trouble with Being Born, the Romanian aphorist E.M. Cioran insists, “Only one thing matters, learning to be the loser.” While I would hardly call the speaker in Murillo’s poem a “loser” in any traditional sense, the speaker insists that losing is an artform to be mastered, “like karate,” one which must become second nature, “like riding a bike.”

The poem catalogues losses: a father’s death, “a cousin’s crashing T-cells,” a sister in prison, a wayward lover, sleep, religion, a wallet. The only sure bet, the poem insists, is that loss will happen. Therefore, it advises the reader to, “Learn what’s given can be taken; / what can be taken, will.”

The collection opens with “On Confessionalism,” a poem that explores the speaker’s response to the loss of a girlfriend. In this instance, revenge is the response to loss, vengeance aimed at another young man, whom the speaker blames for the loss of his love. The poem opens with this scene:

Not sleepwalking, but waking still,
with my hand on a gun, and the gun
in a mouth, and the mouth
on the face of a man on his knees.

As if to drive home the phallic violence of the scene, of masculinity gone awry, we read that the pistol is “cocked.” The imminent murder unfolds, witnessed by “an old woman staring, watering / the single sad flower to the left / of her stoop.” The rich visual and musical nature of the collection comes home in little moments, as here, when the poem mimics a movie, powerfully wrought images backed by the soundtrack of the speaker’s “engine idling behind me, a slow / moaning bassline and the bark / of a dead rapper nudging me on.”

Like any Confessional poem, the speaker here shares secrets with the reader, the defining characteristic of this poetic strategy. Here, as throughout, Murillo’s speaker is contextualized within the poem by his location within a community. To start with, the /poem’s title implicitly indicates that all poetic speakers’ voices are formally contextualized, that poetic traditions themselves have histories and formal characteristics that establish expectations.

Instead of this moment of confession being a navel-gazing individualistic exercise, Murillo’s speaker is thoroughly contextualized within the scene, “Autumn of ’89, and I’m standing / in a Section 8 apartment parking lot.” This detail tells the reader much regarding the social and economic location of the speaker. This contextualizing causes the scene to resonate from the personal experience of the speaker to a broader American tragedy. Before reflecting on these wider resonances in Murillo’s work, we see this particular story develop with a somnambulant feel.

Through his use of repeated phrases with slight alterations, Murillo emphasizes time and again the unreal reality of the scene, the speaker “Blacked out and woke / having gutted my piggy…” to buy the gun, reputedly a “Beretta,” then immediately again, “Blacked out / and woke, my hand on a gun, the gun / in a mouth, a man, who was really / a boy, on his knees.” The reader feels pathos for the young man on the ground, on the receiving end of the gun’s barrel, and they feel pathos for the speaker, even though he holds the gun, because of his loss, because of his seeming inability to confront loss in another way besides violence.

The murder, however, is interrupted. The speaker confesses:

…. And because
I loved the girl, I actually paused
before I pulled the trigger—once,
twice, three times—then panicked
not just because the gun jammed,
but because what if it hadn’t,
because who did I almost become

The failure of the gun to fire represents an unintentional failure of violent masculinity. Ironically, this accidental emasculation saves two lives in one failed act—the victim lives, and the almost-murderer also goes free. The speaker wonders, on this “day nobody died,” why does he not proclaim “Hallelujah” or “Say Amen”? His response to irretrievably losing his girlfriend and of nearly becoming a murderer was instead tears, lamentation on that

Cold enough day to make a young man
weep, afternoon when everything,
or nothing, changed forever….

The alternate spellings of Kontemporary and Amerikan in the title of Murillo’s collection indicate that Murillo’s work will interrogate the racism embedded within American society as well as within the traditions of American poetry. Culturally speaking, in this moment where #BlackLivesMatter can sometimes become merely a performative badge of honor, Murillo’s poems give voice to the particular ways Black lives matter in the midst of America’s culture of oppression. Rather than politics as preachy or as mere appendage, Murillo’s poems are at the same time deeply personal and political.

Murillo’s interrogation of race in America works on both the level of our culture and on the level of interrogating the racial politics of American poetry and its poetics. Murillo’s collection both implicitly and explicitly considers the forms of contemporary poetics. The titles of many poems in the collection read like chapter titles from an academic monograph on contemporary poetry: “On Confessionalism,” “On Metaphor,” “On Magical Realism,” “On Negative Capability,” “On Epiphany,” “On Lyric Narrative,” “On Prosody,” and several others, which are “Variation[s] on a Theme….”

American poetry in general has a tradition of self-conscious poetics, as our poets must again and again justify the writing of poetry in a country where the arts are often seen as afterthoughts of culture rather than its beating heart. Murillo, however, drives this self-consciousness even deeper, developing a particular Black American poetics that challenges and presents an alternative to the “normative” white experience that has often driven our understanding of American poetics.

One way that Murillo does this is by often and explicitly situating his poetic speakers within their cultural milieu. His constant references to particular aspects of urban culture and experience remind the reader again and again that the speaker of these poems is a Black American. The effect of this approach, which is also evident in the work of Murillo’s mentor Yusef Komunyakaa, is to dismantle normative understandings of the lyric self, a self that in American poetics has too long been implicitly identified with whiteness.

In many ways, the ultimate expression of this gesture is seen in Murillo’s variation on a crown of sonnets that forms the center of the collection, “A Refusal to Mourn the Deaths, by Gunfire, of Three Men in Brooklyn.” If this collection is, as I argue, ultimately a lyric lamentation on American culture, we see in this poem the speaker’s apparent refusal to mourn this particular loss of life. The response of anger and desire for vengeance present in the opening poem of the collection is revisited here in a more developed way and in a more complex situation with broader social implications. Rather than merely desiring vengeance on the loss of a girlfriend, the speaker here holds anger at the ways our culture has abused his community. Like the imprecatory Psalms in the Hebrew Scriptures, the speaker here desires vengeance against those who have for so long abused his people.

Murillo has included epigraphs to each of these sonnets, indicating a range of voices that coalesce in the speaker who utters this poetic response on behalf of his community. The epigraphs are from key influences on Murillo’s work, like Etheridge Knight, Robert Hayden, Gil Scott-Heron, and others.

The immediate situation appears in the first sonnet, “…some whack job shot two cops / then popped himself, here, in the borough, just / one mile away….” The speaker, who lost the flame to his last match before he could light his Black & Mild cigar, sees this news on a TV at the convenient store, as he buys more matches. As the sequence continues, the speaker surveys the teeming life of the borough “in all its funk, calypso, reggaeton, / and soul.” His love for this place comes through and causes him “to wonder why / some want us dead.” The internal tensions of the poem build as the speaker confesses, “What / I want, I’m not supposed to. But I want a brick, / a window. One good match, to watch it bloom.”

The pent-up tensions of the speaker’s community develop throughout the sonnets—the continuing story of police and state violence against Black bodies, the poem offers an enduring and troubling image:

He, so to speak, got down… Three to the head,
six to the heart. A mother kneels and prays—
Not peace, but pipe bombs, hands to light the fuse.

The imagined and real scenes of carnage, of Molotov cocktails, echoes of Malcolm X’s assessment of JFK’s assassination—“Chickens come / to roost?” the poem builds in tensions, images of violence, of retribution against those who represent the state’s power over oppressed bodies. The speaker refuses again to mourn the death of the police officers, even as the poem calls this desire for vengeance into question. The final sentence of the thirteenth sonnet asserts, “We know / now, which, and where—the pistol or the prayer.”

The penultimate sonnet returns again to the image of flame, asking in its opening line, “It’s natural, no, to put your faith in fire?” The fire destroys, but in some way, the speaker here wants fire’s properties of purgation—the necessity for destruction so that something new might be formed.

The final sonnet ends, not in a pseudo-reconciliation but rather an assertion of this deep desire for retribution against a culture that paints Blackness in negative terms and then blames Black communities for their own suffering. The negative portrayals of Blackness tempt the speaker to:

…Find some bottles, fill with gas.
Begs breathe in deep the Molotov’s perfume.
Says strike your one good match, then watch it bloom.

While so much of this collection is deadly serious, Murillo’s poems often exude a playfulness as well. The final poem of the collection, “Variation on a Theme by the Notorious B.I.G.,” is almost wholly in this playful vein, the speaker’s tone one of bravado and chutzpah. The speaker imagines himself moving to the apex of the poetry world, hoping his “rhymes might / take me from born sinner to fancy award winner.” Yet even here, in this imagined triumph, the specter of loss remains, the same idea, if not the same words, as in the earlier poem, “what’s given can be taken; / what can be taken, will.” In this poem, the speaker articulates the threat of loss in the final two lines of the poem, which are also the final lines of the collection:

Changed my ways now it’s all in reach—
till I pen my n***** pain and they snatch my seat.

Kontemporary Amerikan Poetry is a complex and necessary work, an American lamentation we’ll all do well to sit with and listen to. It will reward and challenge the reader, ethically and aesthetically. Murillo has here established himself, in only his second collection, as a poetic force to be reckoned with, and reckon with him we must.

Donovan McAbee is a poet and essayist whose work has appeared in The New York Times, The Hudson Review, The Sun, and a variety of other publications. His book of literary criticism, Charles Simic and the Poetics of Uncertainty, was published this year. He lives in Nashville, Tennessee with his wife and two children.