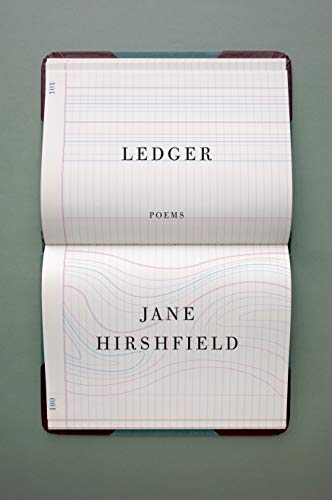 Some ledgers are just right for business accounting, with neat columns for inventories, losses, gains. Then there is the poet’s ledger, with its own lines and columns, its methods of measuring what counts, and toting them up. In the poet’s ledger, even a set of numbers might start to radiate new meanings and surprising feelings. Here is an entry with some numbers, from Ledger, Jane Hirshfield’s ninth book of poetry.

for a person in love, the air looks no different

for a person in grief

in this my one lifetime,
while reading, arguing, cherishing, washing, watching a video, sleeping
the numbers unseeably rise–

I who wrote this:

JH fecit.
The numbers in the seventh line refer to the increase of carbon dioxide in our atmosphere. The acronym refers to parts per million. 400 ppm was a threshold we passed a couple of years ago, and it is thought that earth’s atmosphere has not held so much carbon dioxide in millions of years. Passing the 400 ppm threshold portends climate change on a cataclysmic scale. Numbers like these, in this context, are their own kind of poetry, and they are terrifying. The line that follows is frightening too. The poet’s mind makes a quick run through several images she associates with climate change: snow-less mountainside, proliferation of ticks, the two of them a compound fracturing, one that implies many others. While “climate change” and equivalent abstractions don’t capture what it feels like to live within the grip of such a development, this poem does.
The first two lines of this poem also make room for another kind of entry in the poet’s ledger, a negative space, an emptiness. For the lover, the air looks no different, but for those who are grief-stricken, we don’t know how the air looks to them. Half a line seems missing, and what takes its place is silence. Maybe the speaker does not know what to say. It is also possible the speaker is grieving at what she is going to say next. She knows she is going to be registering loss. When we turn to the last four lines of this poem, we see another kind of entry for the poet’s ledger. “Fecit” is Latin for made it, as in the person produced it. As with some painters from another era, the poet is going to sign her creation, JH fecit. She, like her readers, no doubt recognizes the irony. JH has not only made the poem, she is as a product of modern society, and thus she, like any of us, cannot help but be a co-author to some extent of our environmental disaster.
Coming to recognize that we are all to some extent responsible for the ecological crisis is a fundamental theme in Ledger. The recognition, however, leaves us and the poet more grief-stricken than not. In “Bluefish” she is astonished at the fact that we can be as thoughtless as children who toss soda cans out the windows of the school bus. We still act like babies, Hirshfield implies. We are just mammals needing to nap and who “leap a little when happy or frightened.” There are other poems that look into a submerged sense of collective grief. In “She Breathes in the Scent,” Hirshfield notes that “the grief of the living / misses the grief of the dead,” an observation that suggests the living long for those who have been lost. The poet then grounds this thought in a haunting image. She says this grief is like a woman who goes to the airport to meet the planes that come from her home country. She doesn’t know any of the passengers, but as they exit, this exile or refugee “breathes in the scent of their clothes.” We imagine she is longing for the smell of the earth, the plants, the trees, the lives that were part of where she came from. As we think about this scent, the implications of this image expands enormously. We realize we are all versions of that woman at the gate. We are all in grief at being exiled from the land we have come from.
There are many such poems in Ledger. Hirshfield is probing and examining what it means to understand truly the situation we are in. In “As If Hearing Heavy Furniture Moved On the Floor Above Us,” the poet notes that as “things grow rarer, they enter the range of counting. / Remain this many Siberian tigers, that many African elements.” She says such counting itself alters our consciousness, that it scrapes from the world “its tilt and meander of wonder.” Those forces which destroy the natural world have cousins in the violence of warfare and racism, and that too weighs upon the poet. In “Practice,” her mind goes from counting out physical exercises to counting out the places of people killing each other, places such as Ferguson, Aleppo, Nagasaki. There is a “Spell to Be Said Against Hatred,” but each line of the spell begins with an “until,” implying the hatred will not easily disappear. Probably the darkest poem in the book is “Ghazal for the End of Time.” It asserts that in some fundamental way the covenant between us and the world we have been born into has been broken.

Earth stumbled within and outside us.
Orca, thistle, kestrel, withheld their instruction.

Rock said, Burning Ones, pry your own blindness open.
Death said, Now I am an orphan too.

As troubled as these poems are, there is a counter-current running through Ledger, even in the most apocalyptic poems. Though brimming with a sense of urgency, the overall tone of the book is quiet, calm, meditative. One can almost hear thought and feeling at work in the white spaces. There is a mind constantly turning things over, stitching together what she knows, what she feels, what she recalls, and what she hopes for. She may be searching for answers and solutions to these troubles, but what the speaker achieves is a sense of the actual conditions of our existence on this planet. If she flinches, she reopens her eyes. If she sees into these issues, she also sees more deeply into herself. She is looking for what counts, for what should be recorded before the human story is over. We are in effect watching the poet in the act of absorbing genuinely unacceptable truths.
Thus we also find poems in the book that look inward and probe various aspects of the self. Here is one such poem, in its entirety.

At first the poem seems to have little to do with ecological crises, yet as soon as one says that, the first line starts to resonate. What exactly is the speaker talking about? Maybe it is the temperature outside the window, but maybe something else has lodged itself in her mind. Maybe she is thinking of the rising ocean temperature. Maybe that is what makes her think it is a wonder there is still fruit for breakfast, that there is a house with a window, that she is still there to look out through it. All of those possibilities could co-exist. “Let Them Not Say” is a very different kind of poem. It is the justly famous prologue poem that begins Ledger, the poem that was published electronically on the day of Trump’s inauguration, and then went viral.. Here the poet wants to set the record straight about what we did and did not do as the world around us burned. “Let them not say” she writes, that we did not see or hear or know what was happening. We saw, heard, and knew. We warmed ourselves by the light of the kerosene beauty of the world. We read by its light. We praised it, and the poet says, by the light of its own burning. Somewhere, somehow, and deep inside our beings, we knew what we were doing.
A poet’s ledger offers no simple accounting of anything. Hirshfield wants to give as complete an accounting as possible of what she knows the ecological crisis is doing to the human mind, spirit, or soul. As Hirshfield writes in the title poem, what we care about most we also say is “beyond measure.” What counts in the end does not always find its way into the ledgers of our time, but the effort to get what counts into the book does matter. For example, the final poem in the collection is “My Debt.” Here the poet tries to find the words that will measure what she owes to the world, a place generous enough to permit her to touch the leaf of a thistle and the trembling spider web, and thus allowed her to enter into her ledger that she still had a “debt that is owed to the real.” How does one pay off such a debt? Hirshfield’s answer comes in the last stanza, the last entry in Ledger:

Forgive
spine-covered leaf, soft-bodied spider,
octopus lifting
one curious tentacle back toward the hand of the diver
that in such black ink
I set down your flammable colors.

The answer is you can’t quite pay that debt off. You can only hope that you have the humility to ask that it be forgiven.

Fred Marchant’s most recent collection of poetry, Said Not Said, was published by Graywolf Press in 2017, and awarded “Honored Book” status by the Massachusetts Book Awards for that year. Marchant’s first book, Tipping Point, won the 1993 Washington Prize, and was reissued in a 20th anniversary second edition. His other books include Full Moon Boat (Graywolf, 2000). and House on Water, House in Air (Dedalus Press, Dublin, Ireland, 2002) and The Looking House (Graywolf, 2009). He is also a co-translator (with Nguyen Ba Chung) of collections by several contemporary Vietnamese poets, including work by Tran Dang Khoa, Vo Que, and Le Chi. An emeritus professor of English at Suffolk University in Boston, Marchant is also the editor of Another World Instead: The Early Poems of William Stafford, 1937-1947 (Graywolf, 2008).

Fred Marchant
you said your eyes