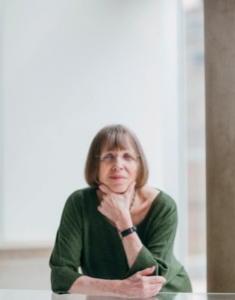 NM: Hi Linda. I’ve long admired how seamlessly and beautifully your poems weave the natural world into human context with startling effect. For example, in the lovely “A Name” from PM/AM New and Selected Poems you write

There are as many names underfoot
as leaves in October:
they burn as briefly on the tongue
and their smoke could darken
the morning sky to dusk.

As well, we see this in “October Funeral” from A Perfect Circle of Sun,

The world is shedding
its thousand skins.
The snake goes naked,
and the needles of the pine fall out
like the teeth of a comb I broke
upon your hair last week.

Ah, that masterful, one-stroke transition from “and the needles of the pine fall out/like the teeth of a comb I broke/upon your hair last week.” So, I’m not surprised to find that the natural world remains central to these new featured poems. Has it become a more important spark over the years?

LP: It has always been important to me. My first book, A Perfect Circle of Sun, was even organized around the four seasons. I live a rather isolated life—my children grown and my husband at work much of the day—so the natural world surrounding me has become very important, has become company. I live in the middle of six acres of woods. When I sit down to write I can look out of every window and see birds, and squirrels, even an occasional fox. The seasons seem to actually change before my eyes. And many of my poems have been sparked by that wildlife, by those seasons! But as I have aged I travel less and am more dependent than ever on what I live with and observe here in the woods.

NM: Tell me more about your six acres?

LP: We are nearly all woods, all shade, with oaks and tulip poplars, ironwood and holly. Sadly, most of the dogwoods are gone. Close to the house, where there is a little sun, my husband has created wonderful Japanese effects with miniature red maples and moss and large stones.

NM: …like the moss we see in “The Moss Palace” from PM/AM New and Selected Poems!

LP: He put up a deer fence around two of our six acres, so now the wildflowers are back in abundance: trout lilies, asters, may apples, spring beauties. At the edge of our property is a lovely, meandering stream that goes from a trickle to a flood, depending on the rainfall.

LP: When the leaves are up, not another house can be seen, and the general feeling is one of privacy and peace– as well as occasional isolation.

NM: You know I can’t help but make comparisons between your poems and Emily Dickinson’s—the isolation, the beautiful, essential imagery; specific, never superfluous.

Many of your poems in this selection are observations of the wildness and potency of the natural world when juxtaposed to the domestic. For example, In “Ferns,” although these “green harps” are “almost beneath/our notice” in their natural habitat, if cut they could turn a panther like Cleopatra into a lazy, coy kitten.

the likes of Cleopatra
into lazy
concupiscence.

I’m noticing an interesting irony here: the ferns increase in potency when removed from a wild setting and placed in the context of a more artificial setting. Can you speak to this a bit?

LP: I’m always fascinated, and indeed pleased, when people find things in my poems that were not consciously intended. This is one of those times.

NM: Can you talk a bit about the redemptive quality of nature implicit?

in a frenzy of winged

LP: There is certainly a redemptive quality implied in those words, but I never underestimate the destructive power also there. The birds are fighting over that muffin.

NM: Yes; no “Disney-ing” of nature here! A clear-eyed awareness of that destructive power has always been present in your work. For example, in “At the Armed Borders of Sleep” from Aspects of Eve

Even the animals seem familiar,
they eat from my hand
while the roots of the trees
tangle darkly with the roots
of my hair. But listen:
the wind is as violent as breath.
The hum of the bees is the hum
of blood, swarming
out of a hive of cells.

NM: Are there other writers who share your particular relationship to the natural world that you turn to from time to time?

LP: Too many to list, from Keats and John Clare and Wordsworth and … to Frost, Galway Kinnell, James Wright, and Mary Oliver.

NM: Can you name specific poems from a few of the above that our readers might reference?

NM: In “New Year’s Eve” you write “The earth like a beautiful round fruit/left out of the ice box/is starting to rot.” Do you think the deterioration of the earth is inevitable or can the process be slowed down…can we put it back in the icebox?

LP: That poem caught me, or I caught it, at an unusually dark moment. I do believe that in the very long run our planet may not survive. In the shorter run, however, there is much we can and must do to ameliorate things.

NM: On another note, your poem “Lawrence of Arabia” is interesting to me-the splendor of a Hollywood-generated Lawrence of Arabia, played by the gorgeous Peter O’Toole (be still, my heart), trumps history. Is this a comment on the power of the imagination/art to supersede fact?

NM: Can you talk about your writing process–how do you begin a poem, and how does it develop?

LP: After all these years, the act of writing is still mysterious to me. The metaphors come from some place I dare not explore. The impulse that puts the first line on paper is a gift from a secret giver. Once I have more or less free associated from that first line or metaphor, once I have actually filled the page with language, the craft and discipline come into play: the long process of revision begins.

NM: As I was reading your poem “Cycle,” it occurred to me that it’s almost impossible for us to comprehend the natural world unless we compare it to the human world as in ”Like an infant’s head/ crowning, / the sun” and “We go together/like the two/ hands//of a clock.” Do I dare suggest that “83rd Spring” implies that after a lifetime of writing about the natural world you’ve come to the realization that there are limits to articulating this relationship?

It has taken me years to learn
how many things
are simply
beyond language.

LP: I think I meant “beyond language” in a more emotional sense. Sometimes, all I want to do is look, not think.

NM: Amen. Thank you, Linda, for this opportunity to talk with you and for sharing your wonderful new poems with Plume. Readers, this pleasure:

low under the trees
almost beneath
our notice

though cut
at the stem
they could fan

the likes of Cleopatra
into lazy
concupiscence.

How Far Would You Trust Your Art?

Stephen Dunn, “If a Clown”

As far as light travels
from the star that’s wished on
to the wish itself.

As far as I could throw
a book of poems
underhand.

and as far as the journey love makes
all the way to indifference
then back to love.

As far as the bee slaloms
through the flowers,
laden with honey.

As far as the eye
can see
blindfolded.

As far as the trail of ink
meanders
over the virgin page.

Or as the poet said
of swimming to save his daughter,
as far as is needed.

emerges—round
and rosy–
out of the sea.

of a clock
about to achieve
noon.

Why are there
searchlights
in the garden?

Those are
the chrysanthemums
you say.

My dog is on Prozac–
separation anxiety–

and my child’s child, no longer a child,
is leaving home.

is starting to rot.
Even my loneliness is lonely.

Tonight’s champagne is nothing
but fizz– the glasses empty.

And the dog still howls
as if he knows

that the clock has always been
the enemy.

at the feeder: cardinal

in a frenzy of winged

in the freezing kitchen

What I remember
is Peter O’Toole, larger
than legend,

bright hair flying.
Enthroned on a camel, he rode
from one end of the Cinemascope screen

or of how a warm wind
has finally slammed
the door shut
on winter.

Go to the window.
Step out
onto the porch.
See for yourself.

It has taken me years to learn
how many things
are simply
beyond language.

Linda Pastan grew up in New York City, graduated from Radcliffe College in 1954, and received an MA from Brandeis University. She has published 14 volumes of poetry, most recently Insomnia which won the Towson University Literary Award. Two of her books have been finalists for the National Book Award, one for The Los Angeles Times Book Prize. She taught for several years at American University and was on the staff of the Bread Loaf Writer’s Conference for 20 years. She is a past Poet Laureate of Maryland. Pastan has won numerous awards, including The Radcliffe Distinguished Alumni Award and The Maurice English Award. In 2003 she won the Ruth Lilly Poetry Prize for lifetime achievement. Pastan lives with her husband in Maryland. They have 3 children and 7 grandchildren.

Readers — Welcome to Issue # 30 of Plume. Let me begin with a break from precedent:  presentation of  material that appears…

Jahangir Hossain on writing “Lover Rain”: The year was 2015/2016. I was present at the Saturday Literature Chat of the…

Jane Zwart on “Half the Time”: This poem owes its existence partly to Amit Majmudar, who invited me into a…