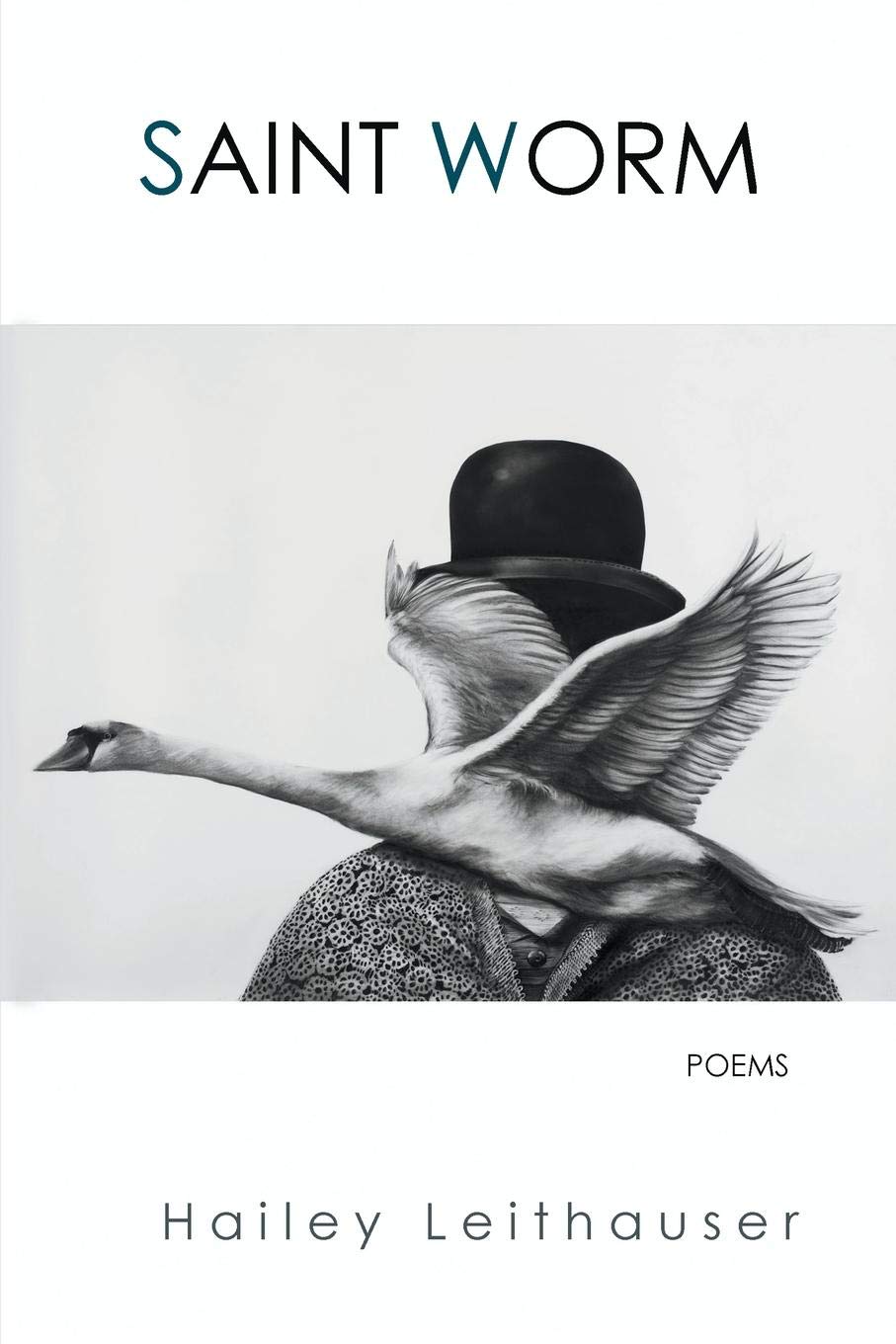 The heart of a bear is a cloud-shuttered

mountain. The heart of a mountain’s a kiln.

The white heart of a moth has nineteen white

chambers. The heart of a swan is a swan.

Those opening lines of the first poem of Hailey Leithauser’s Saint Worm introduce you to several of the Leithausers who will be appearing and submerging and reappearing in this Cirque de Soleil of a book: the lyrical Leithauser, the metrical whiz Leithauser, the watch-me-pull-an -image-out-of-my-hat-and-top-that-with-a-flock-of-them-while-you’re-still-goggling-at-the-first-one Leithauser. And while the reader isn’t yet aware of it, this prelude also sets you up for what will become the rhythm of the book – the swerve. She is the Queen of Careen.

The book proper begins with two small, honed poems whose internal echoes and sharp observation nod in the direction of Kay Ryan, though “Octopus” ends with an unexpected jab that’s Leithauser’s thumbprint. Intriguing. Fine. And then the third poem, at three pages the longest in the book, “I Shall Name the Worms”:

I shall name the worms

who feast on me:

this mob shall see!

with never far behind

When reading literary magazines I’ve discovered that if I find myself laughing and shaking my head and demanding “What? WHAT?!?!” I’m almost certainly reading a Hailey Leithauser poem. Watching her keep all the elements in the air – the musical, the ridiculous, the gross, the lush— carries you headlong through the worms’ amiable speculations on their corpse’s identity and to the finale of the evening,

echoed by a single,

I suppose a metrically-rollicking celebration of the worms who will devour the poet may not be everyone’s cup of carrion, but it is an amazing and joyful accomplishment, one that takes skill and nerve in equal parts.

In my past life I had a nut brown wife,

a gray and white house looking over the sea,

a forest for love and a river for grief,

a goshawk for beauty, for courage a knife,

a city for distance, lights spread on the sea.

In my past life I had a brown wife…

which is followed by “Slow Danger,” a disquisition on varieties of death, which is then balanced in its turn by the sheer music of “Moley’s Chair,” its beauty nevertheless tempered by the comfortable, squalid realities of decay:

I hold in my prayers its tassels and wrinkles,

anoint with soft drool its patches and stain,

guard in my heart its orange, threadbare

the petals and sepals of each oversized,

Yet Saint Worm is not scattered. While the book’s subjects range from toads and road signs to crows and caution and cannibals (of a sort), there is a recurring sequence of poems, and “I Shall Name the Worms” stands as a declaration of the poet’s double-dog dare to herself: to contemplate mortality through the widest possible range of poems about worms, from Ouroboros to those trying the virginity of Marvell’s coy mistress (“Coy Worm,) to the famished worm of the title, subsisting on the meagre emaciated saint of the title. Bookworm, glowworm, sin-eater worm, fat worm, eminent worm… The entire sequence is a tour de force, the shiny black warp through which the other poems weave.

But Hailey Leithauser has a problem. Her voice is unique, her technical skills are prodigious, she has range, she has heart. But she’s funny. Not just funny, but capable of the full spectrum of funny: witty, slapstick, sardonic, vulgar. And there lingers in the literary world the suspicion that a funny poet cannot be a serious poet.  As Tom Robbins says in his essay “In Defiance of Gravity”

…the notion that inspired play (even when audacious, offensive, or obscene) enhances rather than diminishes intellectual rigor and spiritual fulfillment, the notion that in the eyes of the gods the tight-lipped hero and the wet-cheeked victim are frequently inferior to the red-nosed clown, such notions are destined to be a hard sell to those who have E.M. Forster on their bedside table and a clump of dried narcissus up their ass.

It’s the notion behind, to choose one example, “Pickpocket’s Song,” which lifts the subject and even the (barely concealed) meter of Old English sagas and tailors it to a pickpocket’s trade while recognizing their common goal:

hither then sterling, then amethyst, onyx.

platinum and plate, all cabbage, all cheddar….

This is serious play, and for the narcissus-free reader, a delight.

Leithauser is a serious poet, as serious as the grave.  But she is not a ponderous poet. Men have died from time to time, and worms have eaten them, but rarely as hilariously.

The reader who goes back to “I Shall Name the Worms” may for the first time register the epigraph by e e cummings, “worms are the words, but joy’s the voice,” an epigraph which might serve for the entire book.  And you have to hope that amid all the justifiable gloom and tortured voices there is room for poems that sing of and through joy, however unlikely. If her humor tends toward the black it is the black of a night sky full of stars.

Susan Blackwell Ramsey‘s work has appeared in, among other journals, The Southern Review, Poetry Northwest, 32 Poems and Best American Poetry; her book, A Mind Like This, won the Prairie Schooner Poetry Prize.