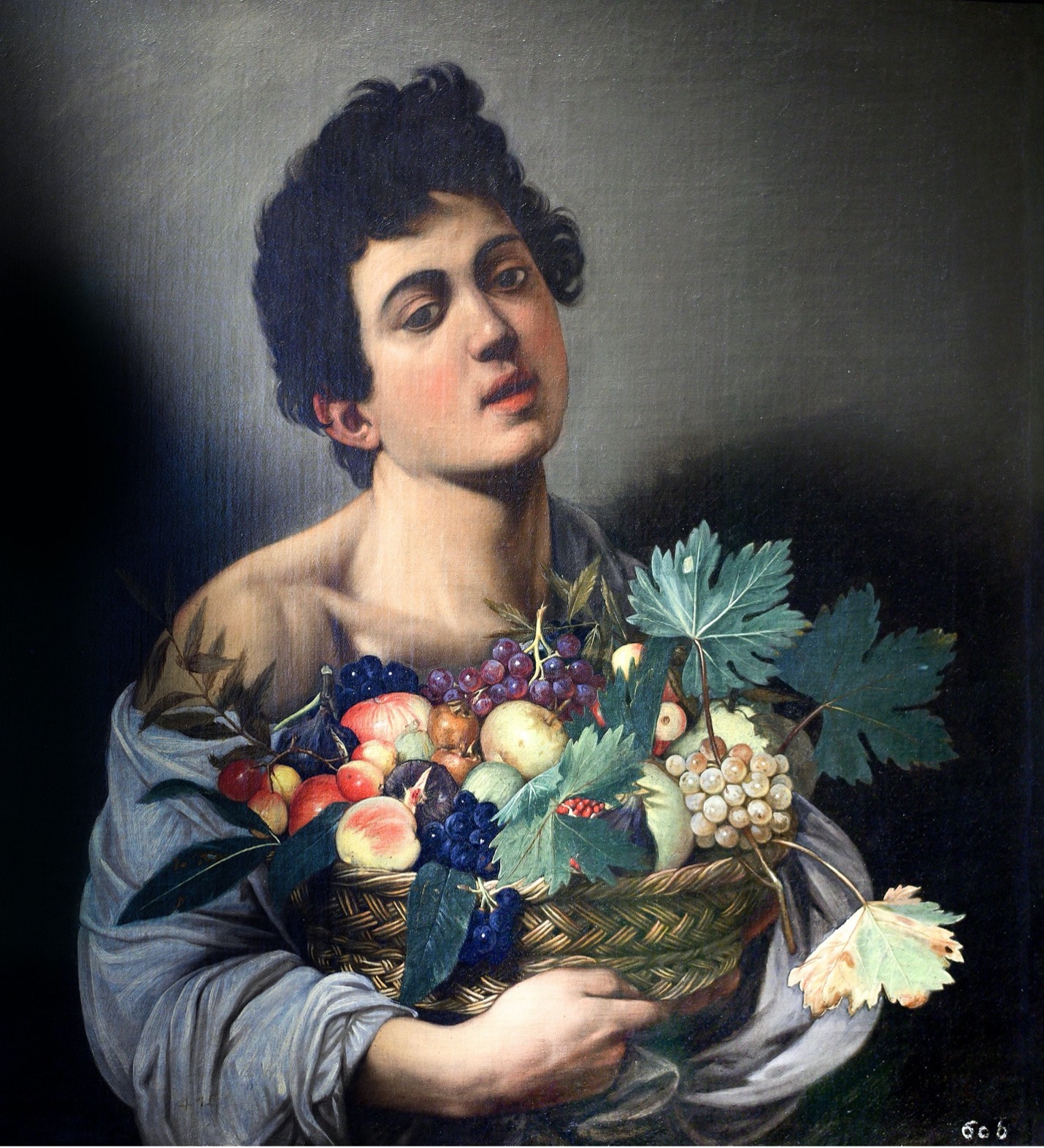 The real is offered, unashamed:
the flesh still callow, still naïve
despite the décolleté, the budding
mouth, the rosy skin entreating us
to love; a sturdy trunk, you brandish
glossy fruits, a grafted basket, spool
the light unraveled from a casement
improbably high, spin it back as figs
primly green or wantonly split, midget pears
on the branch, red-coquette or tawny-demure
and the big boys saffron too
twigged and bottoms-heavy
squatting low and fat, the ruby spill of pomegranate
seeds, medlars bletted for the spoon, apples splayed
brazen scarlet, sickly jonquil, or vermilion-striped
and sprawling grapes, deep magenta, bluish-black,
tarnished white, trumped by a lone two-tone
peach, flamboyant but like all these jailbirds
bound by plaited
wicker manacles
that grant only browning stems,
quizzical mint, vinous leaves to
overflow, and only one to say, blighted
and palm-down, what your listless eyes
and hair as somber as the wall, your marble
hand already meant: that brightness, strong
on your tough young fingers, moults to an ashen
sleeve, coils along your arm, back, shoulder, till
it winds you and all firm lushness
in a flaring, still unnoticed shroud. 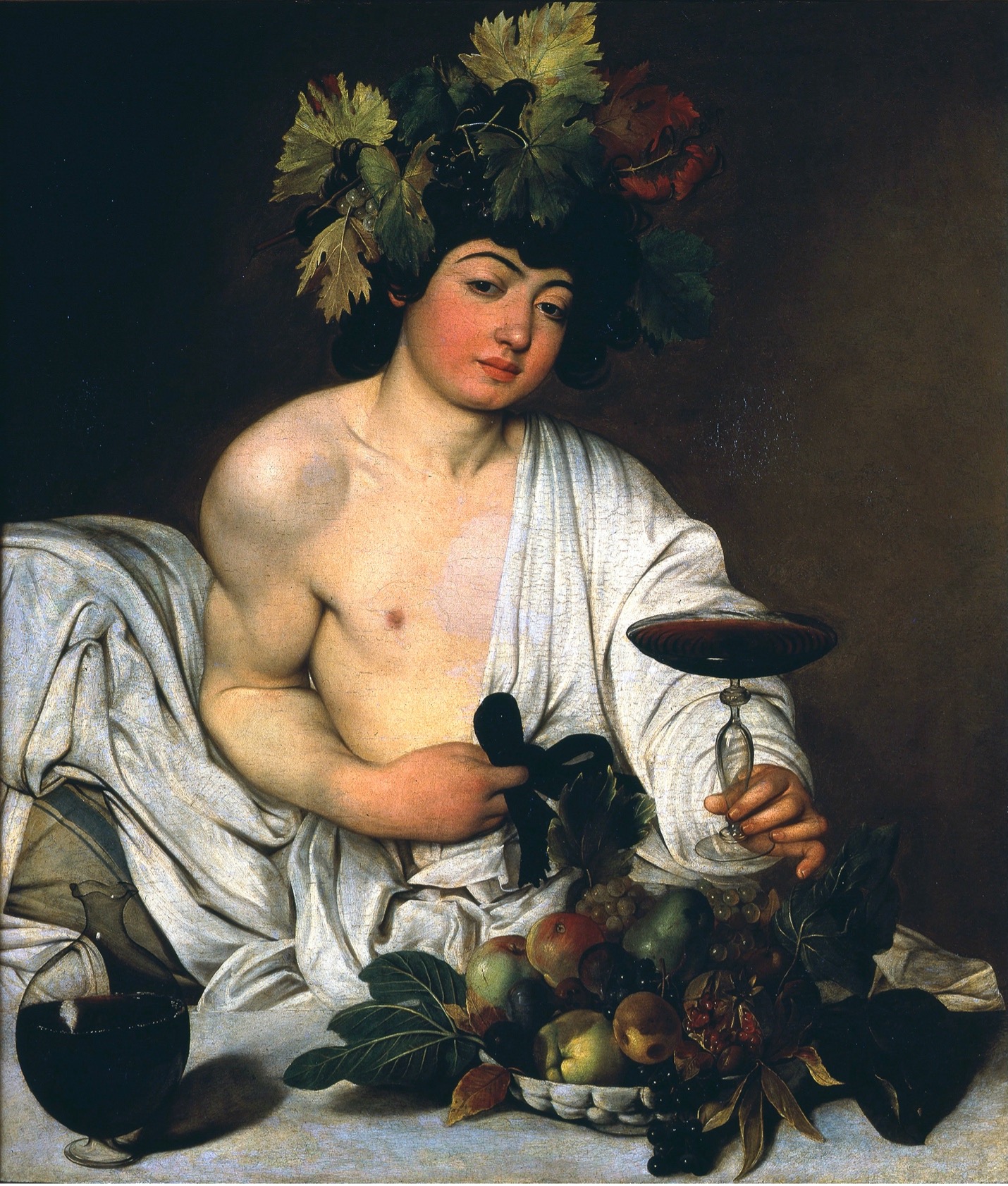 Deified, you preen as a cold defiler,
vaunt your wild corolla like a shout
to crown the end of innocence
with a backward mass, a table
set with wine and bread incarnate, flesh
as fruit, as flesh itself, the real presence
of seduction, your cere altar cloth
commingled with the pearly sheet
that writhes from your arm across your back,
tangles with the blue-striped pillow on a bed
and jumbles into your lap below the black
sash you open now, unloosening the silky
bow to elevate your sacrifices still unveiled,
the other shoulder, other bicep, other nipple
down to your navel and groin, as you recline;
though what your pink mask portends is not
desire but the solemn minuet of a pagan rite,
and like the leaves that frame your sightless
eyes, the jubilation swells from the molared
breakable dish, the deliquescent sigh of figs
and apples past their prime, an almost rotten quince,
a lusty verdant pear, a pomegranate stabbed to wolf
its peritoneal delights, and uninhibited the softening
grapes that plop onto the mensa linen, rise to mimic
your crimped hand, its dirty nails bunched to lift
a chalice of your aqueous blood, no mystery here
but evidence, exposited in the decanter’s
shapely glass, its blowfish petaled mouth
as pursed as yours, your impassive face
only a bowl for the dark rapturous vines
that magnify the clusters
on the funeral slab below,
glowering with embers—crimson,
umber, garnet, jaundiced green—
the autumnal countersigns
to your bogus immortality. 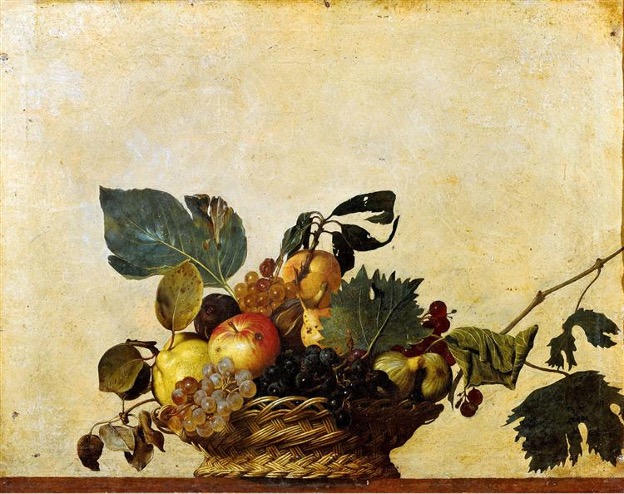 Your portrait needs no figure, only a warm
creamy space where someone’s skin might
have bloomed for a moment, might have stirred
to the touch, since your textures, your perfumed
sweetness and sweat, your curving colors are all
here, and even your hidden succulence, your cry
of arousal, plenitude, satiated wilt: yes,
the sepia shelf where you now divulge
your inmost character has often held a glove,
a gold-ringed hand, a book, or pensive elbow
propping up a steadfast gaze; but your life is still
and visible in a sunny peach, faintly blushed atop
the isosceles mound, a crannied charcoal fig,
another rived and bister vying for center slot
with a pocked, xanthous pear, a nubile
brace to starboard, cozied stem to stern,
their frisky ridges counterbalanced by a plump,
stately quince, his physique outmatched in turn
by the ambrosial, bicolor apple your Eve
or Adam will bite, a bewitching carmine
cheek where a tiny, vanished snake has slyly bored
an orifice—suggestive of the rampant, juicy grapes
untrammeled by their woven pail,
spilling waywardly on every side
in dank profusion, golden, russet, indigo
and frosted white, virgin, ripe, climactic
or shriveling to decline, some but flaccid corpses
of what they were; and this the panoply of leaves
repeats like a spectral fanfare, haloing the fruit
despite disease and insect scars, raising a brief,
unvanquished anthem to an instant’s fragility,
or descending into the skiff, already shades—
since you are honest, not symmetrical,
your shadows listing toward the night;
and yet you tell us more than a memento mori
as you cycle through the elements, earth-born
bodies aglow with the fiery orb, returning to air
in exhalations, starred with the dew of secretive
tears, because at every twist
we descry the bluish strokes
of skylights knowingly brushed
into your folds, the unseen you.

Hoyt Rogers has published his poems, stories, and essays in many periodicals. He translates from the French, German, Italian, and Spanish. He has translated books by Bonnefoy, Borges, and du Bouchet. His translation of Bonnefoy’s last book of poems, Together Still, was published by Seagull Books in 2017.

Oxygen & Waking to 1939, I Study Those Standing

Hoyt Rogers
You return with us to the grave,

Hoyt Rogers
The farm along the Maidendown,