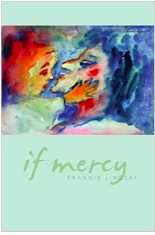 In his exquisite, jazzy homage to Frederick Douglass, Robert Hayden resists the elegy’s gravitational pull toward mere grief or mere celebration. Instead, his closing lines affirm that Douglass’s crusade lives on when future generations strive to flesh “his dream of the beautiful, needful thing.” Though poet Frannie Lindsay has a far different voice from Hayden’s, she nonetheless shares his exploration of the elegy as a capacious form where readers discover a spiritual call to endure even as we mourn. Like most elegiac collections, Lindsay’s fifth book brims with laments for parents, siblings, and even pets, and her tributes are as evocative as they are lyrical. What sets If Mercy apart, however, is Lindsay’s sense of mythic ritual, her reimagining of biblical narratives, and her search for healing in the natural world, and the result is a vibrant, open-hearted journey into death and the renewed purpose it gives our lives.

Lindsay’s elegies often serve as liminal sites where memory and imagination blur, so her rendering of personal loss expands through archetype and myth. In “Fetish,” the speaker yearns to build a “makeshift sister” from a surreal litany: “use the most destitute Februaries/tie round her hips a willowsnap skirt/unskip two pond stones/for her wanderless feet/ghost her heart where a flown owl/once set up house for its hooing/fashion her hands from/the sumac leaves’ hiss/on the fenced edge of ramshackle.” By the end, the poem constructs a witchcraft ragdoll “rattling awake whenever/I say so” as a charmed but elusive surrogate, presumably for the flesh-and-blood sibling whose passing readers encounter in poems such as “To Heartache,” “Sister,” and “The Pissed-Off Life-Force Visits My Sister’s Deathbed.” Breathless and haunted, “Apparition” finds Lindsay at her most lyrical, speaking to a loved one’s ghost that sometimes appears “as a mother trying and trying/to nurse her gaunt infant” or “a hand placing baptismal snow/on a mountain to name its stillness.” “Specter,” one of the book’s longest poems, searches for the female spirits ravaged by the perpetual debasement of gender roles in a patriarchal society, with particular emphasis placed on body image and expectations of beauty. The poem’s gripping opening lines beseech us to consider the kindergarten girl who is already “one of the wind’s outgrown costumes/stuck in the swing set’s tangled chains,” destined to be an “accrual of all the hover and swoop/no one quite believes in.” Throughout, Lindsay universalizes her private grief to remind herself and her readers of death’s mystic rites, and by doing so, each individual loss is amplified to reflect the absence left in the tribe and the tribal imagination.

Some of the most captivating and original poems in If Mercy retell biblical stories with heightened attention to the plight of women, who endure the dual displacement of male oppression and religious obligation. “Abraham” revisits the familiar tale of the patriarch who “climbs the hill believing/his handsome son is the ram God needs as proof,” yet strikingly, the poem shifts its narrative focus to Sarah and her oft-overlooked burden:

Easy enough to imagine Sarah at home
with nothing important to think about,
folding the muslin bedclothes,
watching the old magnificent laziness
rise from their goat’s nostrils, rejoicing still
that her womb has laid aside its years
of fatigue, and borne them a son.

By meditating on Sarah’s domestic anxieties and enduring gratitude for the miraculous birth of Isaac, Lindsay rejects the Sunday school version of this father-son story in favor of a more inclusive one. Similarly, “The Barn” offers a rustic and dreamy portrait of the annunciation, deftly capturing Mary’s humility and the strangeness of divine vision. The poem follows below in its entirety:

Throughout, Lindsay’s poems find healing in the primal, ancient bonds humans have with animals and trees, which increasingly become rugged symbols of Christian grace. A recurrent totem, the weeping beech tree appears in several poems as an object of reverence, a site of renewal, and a transmitter of prayer. A somber still-life, “Poem at the Deathbed of an Atheist” dwells on the little distractions that fill a man’s final moments, but also suggests an unresolved bitterness and spiritual numbness have stunted his earthly purpose. “If Mercy,” the book’s title poem, unspools a liturgical anaphora of elliptical “if” clauses that meditate on the beauty and perseverance reflected in the natural world, from the ocean “with nothing to offer/the blistered foot but salt’s/vacant blessing” to “the idle blueberries/along the road’s quiet heat.” One can’t read far in this collection without encountering the intuitive, sensual character of dogs and horses, as we see in “Improvisation for a Friend in a Time of Sorrow,” which exhibits Lindsay’s brilliance for metaphor:

The mare asks what else she can give you,
for she has dragged the last knotted star
out of the barn by a nail come loose from
her back left shoe in return for
the baby-cut carrots
you packed in your lunch;
she has sloped her polished neck
and eaten one from between your thumb
and your forefinger: she has taken all of
the time that she needs, her teeth
the size of chapel doors, the peaceful steam
of her nostril’s velvet tunnels.
Still it is late in the year and the pasture is frail
so she offers her bruised horse heart, a few
strands of hay, the motherly damp
of her nickering.

If Mercy falters at times in its traditional depictions of old age and pet ownership, where familiar tropes limit Lindsay’s desire to show late life’s dignity and occasional radiance. The elderly couple depicted in “In Memory of an Evening Walk in August” verge on pharmaceutical commercial stereotypes, replete with a herringbone cap and Christmas sweater, as “they still notice/the new grass feathering their ankles,/her wrist still hooked under his elbow,/neither one saying much.” Though tender and vivid, “My Mother’s Shoes” dwells so intently on an aging parent’s switch from laces to Velcro that the mother herself seems secondary amid the exposition. Situated among so many grander losses, “After the Death of a Shelter Dog” feels melodramatic, where we encounter a bereaved owner who “will not speak the nickname/summoning the loll of solace” or “cannot choose/a door to leave or enter by.” In that same poem, Lindsay’s lyrical attentiveness falters in lines such as “The realms of bowl are void/of water, kibble. They must be thus.”

Despite these shortcomings, If Mercy triumphs as a compelling descent into death’s shadows and reemergence into light. Lindsay argues against the tidy binaries of doom and bliss, preferring to view this paradoxical life as one of “unsurvivable gentleness” where beauty, faith, and love eddy their grace against the current of loss. In her best elegies, Lindsay carries us through these shared griefs, renewed and singing.

Grief and irreverence rarely align in poetry. We have our wistful poets and we have our witty poets, conventional wisdom…

Two epigraphs from the esteemed Cornel West introduce the seventh section of Primitive: The Art and Life of Horace H.…