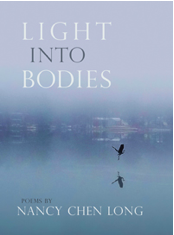 In “Lapidary,” arguably her most commanding poem, Nancy Chen Long constructs a lush and brooding narrative about a rock collector who spots a flaw in her home’s masonry, leading the character to ponder the impermanence of her craft and her own transience “pocked with holes.” As with Frost’s “Directive” or “Birches,” though, the savvy reader marvels at the poem’s lyrical authority as well as its allegorical intricacy. By the end, Long strikes a fleeting truce between beauty and bleakness:

It’s only then that you should take her

to the garden on the other side of town,
where the two baby stones sleep

side by side, both with their polished marble
hearts, their malachite mouths,

both swaddled in the greenest grass.

At over a hundred pages, Light into Bodies is a robust debut, but Long’s interrogations of her Tawainese-American heritage, chronicles of self-discovery, and appreciations of nature’s invisible order result in a cohesive and mature first book. The childhood confessional “Lessons” recounts how “the woman my father hired/would push/the eraser-end of a yellow pencil/into the mouth/of my mother/to teach my mother/how to make a proper/English sound.” Terse and imagistic, the poem deftly conjures the public tensions of assimilation as well as the private struggles of a young couple attempting to reconcile their disparate cultures. The personal and political collide again in “Christmas, Saigon,” Long’s most evocative short poem:

Because children would run up
and throw hand grenades
into the bus filled with G.I.s
as it slowed to a stop, wire mesh
had been placed over the windows.
My father would watch
one particular child—not unlike
his own eight-year old—as she darted
towards the bus on sultry afternoons,
grenade in hand, reaching as she jumped,
her sapling fingers struggling
to place the fishing hook
attached to the end of the grenade
onto the screen—not unlike
the gesture his own child made
in a snapshot sent from home,
his daughter arching up
as she secured an ornament
onto a blue spruce.

Long’s gifts for metaphor, imagery, and understatement are also at work in her poems of romance and domesticity, particularly the sonorous couplets of “Orion,” where an anxious speaker awaits her beloved’s recovery from surgery when “his body is a freckled map of night.” Throughout, Light into Bodies exposes and resists the social burdens of gender in some of its most memorable poems, including “On Seeing ‘The Embroiderer, or Mette Gauguin,’” “Curry,” and “The Cleave of Color,” which affirm the spirit of female creativity in the face of damage and self-doubt. And yet, Long is perhaps most ambitious and impressive in her scientific studies, such as the expansive sequence “Blazing Black Holes Spotted in Spiral Beauty,” “The Importance of Shells,” and “A Drift of Dust,” which boldly proclaims “If we are but ash, then let our names be the urns that hold us.” A handful of short works underwhelm, such as the fragmentary “It’s Whatever You Make of It” and the sentimental “Hold on Lightly,” which aren’t nearly as fulfilling as Long’s other poems rooted in family memories. Additionally, “Continual Process Improvement for the Astute Young-Adult Student, or Lesson as Lesion” attempts to weaponize jargon, euphemism, and repetition against themselves, but results in Long’s weakest lines (“full of waiting/for the sun/waiting for the sun to teach/you look sunward/watch-wait in stare/stare-follow the sun/to learn how/exactly how/one can improve”). Given its range and heart, however, it’s easy to see how Light into Bodies won the Tampa Review Prize for Poetry, since at her best, Nancy Chen Long distills “the language you cannot parse.”

It is a strange irony that despite all of our war documentaries, battle reenactments, and tourist traps, the American Civil…

When Of Being Numerous won the Pulitzer Prize for Poetry in 1969, George Oppen seemed like an emblematic poet for…

Tim Seibles: One Turn Around the Sun