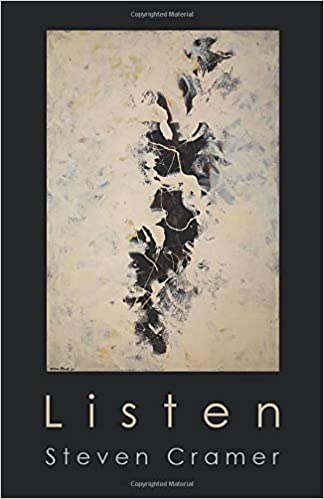 That time when one can no longer wander away
And even the least attentive fall silent
To watch the thing that is prepared to happen.

John Ashbery, from “As One Put Drunk into the Packet Boat”

Listen is as much about seeing – and noticing – as it is about, well, listening. In his newest collection of poems, Steven Cramer deftly weaves together several threads – the therapeutic, redemptive power of paying attention; the intimacy with self and others that such attentiveness makes possible; and a rhetorical heft that comes from the consistent and nuanced observation of the movements of one’s own mind.

Organized into four sections, the book begins with the individual, inner experience of depression, casting an ever wider net of reference through to the final poem, from family and family history (“A Habit,” “Calling Back,” “The Glen” and “Elegy to My Family”) to broader cultural and political contexts (“American Freedom,” which opens the book’s third section, and “Independence Day” are good examples), and literary allusion (William Blake, Walt Whitman and Emily Dickinson to Tomaž Šalamun, Laura Jensen, and Donald Justice, to name just a few). Cramer weaves in just as many references to art, music, and philosophy; but my point here is not to produce a list of references that any reading of the book will make clear, but rather to emphasize what such referential and tonal range allows the poet to accomplish. The poems do not proceed in a linear fashion, say from inner to outer worlds, but instead work more the way the mind itself most often works, accordion-like, associative, and circling. Reading the book as a whole, we get a sense of a mind making sense of itself, using the accumulated experience lodged in our brains, retrievable or sometimes not – “My brain felt swiped clean” or the whole of “Without a Name for This” – as well as those keenly observed sensory details from outside one’s own.

The first poem of the book, “Bad,” introduces the speaker’s grappling with a prolonged, personal episode of depression. The voice here is willing to be as forthright as it is able to be, with a wry sense of humor, playfulness, and self-awareness that permeate most of the poems in the collection. It and the poems following demonstrate a capacity for vulnerability and even resilience. At the same time, given this past year of an in many ways soul-crushing pandemic, the poem cannot help but resonate outward to name and speak to a wider, externalized set of feelings:

It got bad; pretty bad; then not
so bad; very bad; then back to bad.
Jesus, let’s let things not get even worse.

Throughout, these poems are attentive to both the inner and outer worlds and the relationship between the two. The poems’ persistent impulse to attend to inner landscapes as well as external ones through sensory details shows up early on, in the second poem, “South Belknap,” where, at a group therapy session

… Mark writes on the white board: “Men are not
disturbed by things, but by the view they take of them.”

While most scribble this sentence into notebooks
on their laps, two or three look out the one window.

The poem sets up a kind of book-length bifurcation of human awareness; namely, the inner reflective impulse (most scribble into notebooks) and outward observation, where “two or three look out the one window…” And what those two or three see out the one window is replete with visual specificity:

They see water from a fountain surge, plume, crest,
then fall into a pond no bigger than a toddler’s pool,

and a boy with sinewy clots of hair, still as a page
in a picture book, bows to read his cell phone,

and sparrows fly into and out from the azaleas,
and roses flicker, fire from a magician’s fingertips.

The poems offer many occasions for noticing, instances of minutely observed details which at the same time reveal inner states, so that what the speaker notices also becomes a moment of self-reflection, self-knowledge, and often a wry self-awareness. While the speaker is often a narrator, or speaks in the third person, there are as many instances of an “I” or “we” – and most definitely a “you” that reminds us the flip side of listening is being heard, and those most intimate relationships, those experiences of hearing and being heard, are the ones that ground us most firmly: “it’s you I’ll be listening to at the last,” or “But first, love, help me stop playing dead.”

The variety of formal strategies – everything from stanzas of couplets, triplets and more, to sonnets (In Favor of Magical Thinking) and prose poems like “The World” and “Sunday Morning” – allows for a wide range of tone and registers, from the offhandedly colloquial in “I Want That”

like silver buffed up to a shine.
I want that shine too; a ton of it.

or the humorous, nearly-glib take on melancholy in “A Cosmography of Melancholy”:

Next to boredom, shame’s
the feeling most akin to a sweat-
heavy hair shirt previously owned by Satan.

Other than the Sea of Crises,
which anyway’s a landmark on the Moon,
or the Plain of Judgment and the Vale of Mourning
and the Elm to Which False Dreams Cling,
which anyway are sites to see in Hades,
about my sojourn in the brutish atmosphere of Mars
there’s nothing more to say—
other than, Do you know the mosquito
eater doesn’t eat mosquitos?
It drinks from the Sea of Nectar—then, when it’s all
grown up, has sex and dies. Bitterly, bitterly.

The unexpected swerve in the last five lines, beginning with “there’s nothing more to say—” indicates that the most important thing to say is yet to come. The apparent non sequitur lets us know that of course we are not really talking about the mosquito eater and creates an important tonal shift, in the same way that suddenly averting the gaze sometimes allows a kind of perceptual breakthrough, or a way to muster one’s courage to say the further, more difficult thought. This is Steven Cramer at his best, deploying tonal shifts, questions, and associative leaps to refocus the poem’s path and depth.

Finally, there are a number of poems Cramer calls adaptations of poems by Osip Mandelstam, Eugenio Montale, and Ingeborg Bachman, for example. As the poet has explained elsewhere, he uses this approach to circumvent writing roadblocks. Yet the result is less a translation than the record of an encounter. Reminiscent of Lowell’s “imitations,” these adaptations deserve longer treatment than this review allows. Suffice it to say that, with respect to this collection as a whole, these poems cultivate the kind of literary intimacy that helps sustain the writing life.

But let’s go back to the title poem of the book, where we are reminded of the singular, grounding experience of intimacy with another, when “the bedlam of thought”

I have in mind is a sputter of dis-
sociation you, you only, can talk down.

it’s you I’ll be listening to at the last. How

resonant—the bones of our middle ears.

And the question, the poet asks in “Without a Name for This”

How do you learn to look to yourself like a child,
with understanding and bewilderment at once?

Indeed, how do we learn to look at others, at the world, with understanding and bewilderment? Listen is Steven Cramer’s users’ manual for attentiveness, enacting the salvific (my word, not his) power of listening, of paying attention at all times to the worlds within and the worlds without. His sense of play, wit, and rigor, at once intellectual and emotional, that buoys these poems never untethers itself from the serious business of honesty and vulnerability. “So much about living is sadly mistaken.” Despite the sometimes “threadbare” shape of one’s own condition, and of the world, these poems leave us with an overarching sense of gratitude for a life shared deeply with self and others, an acceptance, in “A Burn So Bad It Requires Ice,” of the bitter sweetness of being human in this world:

Some nights I go to my threadbare backyard,
stand there, quiet as a sundial, staring at the sky,
and soon enough realize I’m looking at the stars.

It’s no wonder, then, that the poet chose to preface the book with this epigraph from Rilke, “The main thing was being alive. That was the main thing.”