A World Graced by Disorder:

Orlando Ricardo Menes’s The Gospel of Wildflowers and Weeds

“I will not desist in finding God, mine & yours…”

From the dry puna winds of his childhood Lima to a first glorious rainfall – aguacero tropical – in Miami; from muck-and-slush puddle, river, and ocean to that “obstinate life in the ocean” of the Virgin Mary’s womb, Menes’s poems seek water, and life, everywhere. The first poem of the book, “Ode,” serves as an origin story of sorts – “The three of us born in Lima, a desert wedged/Between the Pacific & the Andes” – grounding us materially and metaphorically in desert dryness and a subsequent wanderlust at once internal, geographical, and cultural, that propels the book from beginning to end. The second poem, “The Blackberry Tree,” recounts a vivid image from childhood as he climbed the blackberry tree in his backyard

to its highest branch and saw over the jags of glass
a bare woman bathing in a brown field, her quick hands
splashing water from an oil barrel, rubbing hard
with a brick of laundry soap until skin glistened

This vision, “fifty years on,” turns out to be, in retrospect, formative and magical – epiphanic. And as with all decent epiphanies, he unpacks it over a lifetime. What opens the book with a celebration of the goodness of the flesh in general (as opposed to the flesh as a site of sinfulness) ultimately takes us to the penultimate poem in the book, “Skin,” an acerbic repudiation of those cultural, religious, and socio-political value systems that would impose a monocultural order on the world. And that includes, for Menes, the inner world where, as the speaker in “Théophile Gautier in Istanbul” says “we kiss the wings of God/the Man, God the Woman, God the Child.” In Istanbul, where the Bosphorus straddles East and West, God, Menes asserts, is this and this. Brackish water where Catholic saints both historical – Saint Teresa of Ávila, Saint Lucy, and Saint Apollonia – and apocryphal (“St. Tatua, Patroness of Tattooists,” “St. Lapsia, Patroness for Catholics Lapsed & Re-Lapsed”) – transmogrify religious authority and identity, turning known identifiers into the unknown, as if to say consider “The Patriarch Jakob as an Arawak” or “Sister Yara, square-jawed, hairless Carmelite/of the Caribbean rule” with her “convent on a coral swale,” (from “Turuqueira”) undoes traditional visions of cloistered religious life through vivid, sensuous images unsettling and yet utterly attractive in their otherness:

Stopping at every twelve yards to sign the cross,
Sister Yara balances a wheelbarrow of infants,
mostly bald boys diapered with jute, their moles
like black beans, lips of ackee, cashew lobes.

Menes excels at visual and sonic imagery, which makes it nearly impossible to resist quoting entire poems. Perhaps “St. Teresa of Ávila upon Reading the Song of Songs” is emblematic of what he does throughout the whole book, re-reading and re-experiencing landscapes and language as both inhabitant and visitor, where the Carmelite saint is not the familiar rose of Sharon, but

I am the sandbur of Sharon & the spurge of Galilee. Crabgrass
multiplies under my feet, the bee orchid stings at my touch. I
spread the gospel of wildflowers & weeds in the cities & the
hamlets, the asylums & the cloisters, the pigsties & the gardens.

and “to woo our Lord/you must be stubborn as the fig seed that breaks the rock.” These are stubborn poems whose language of excess and otherness brings us beyond the known.

Menes’s poems drink, then, not from a single well but from an aquifer. Or maybe a firehose. They are linguistically, formally, and referentially excessive. And yet, how could they be otherwise? If their aim is to seek out and celebrate “a world graced by disorder” – and I think it is (at least, partially so) – then it makes sense that these poems engage the created (and creative) world in its linguistic, artistic, cultural, topological, and climatological diversity. In some poems he pays homage to those writers who have most deeply shaped him as a poet – José Lezama Lima, Alejo Carpentier, and Hart Crane. Other times,  allusive opportunities for formal and thematic encounters with poets like Lorca (“Lorca in the Forest of Goatskin Trees” and “Cuban Triolet”) and Hopkins (“Homage to the Olive” and “Tower of Babel”). Many poems engage with modern Cuban painters – from the four numbered tryptichs dedicated to Fidelio Ponce de León, Carlos Enríquez, Víctor Manuel, and Wifredo Lam to Arturo Rodríguez’s 1998 painting Sin Título in “Altar Boy,” as well as Bernini (Ecstasy of Saint Teresa) and Caravaggio.

The magical realism that infuses these poems is transgressive in the way that the imagination itself, if we allow it, is transgressive. It undoes the done and creates fissures in the seemingly solid foundations of identity and value. The Latin American magical realism we know through writers like Gabriel García Márquez, Julio Cortázar, Mario Vargas Llosa, and Carlos Fuentes, for example, drank deeply from William Faulkner’s well, which leads me to think here about American poet Robert Duncan’s openness, and his assertion that the goal of composition is “not to reach conclusion but to keep our exposure to what we do not know.” Indeed. It seems to me that’s precisely where Menes’s poems situate themselves – in the paradox where any mystic worth her salt would say God just might be hidden and even encountered, in the overwroughtness, the particularity, and the chaos of color, of language, of landscape, and of history. Enfleshed in the material world. I love, for example the palpable, luscious mouthful of words in “Tower of Babel,” words “like flotsam chromosomes or castaway fossils of such beautiful amber” as

barbacoa, canoa, fotuto, hamaca, iquana, malanga, taco, yuca.
With these words I make machines of memory in flesh and marrow.

His poems are doorways into Menes’s hunt for paradox over certainty; for undoing and the undone over eternal or completeness; for chaos over order; for dark over light. As his “Minotaur” asserts “There’s no logic to creation,” and this statement is a transgressive touchstone for the poet – a sort of untotalizing logic of the illogical and that which shatters or at least destabilizes our expectations. On this journey through excess, the Minotaur proclaims himself as

… the apostle of impurity, the inciter of
instinct, the confounder of nature. Hear me, my half-beast brothers,
my multitudes of the half-bred & the ill-bred. It is our destiny to
transgress biology. Let balance surrender to flux, let chaos overrun
God’s handiwork. Join me in my crusade to break the curse of
wholeness, scatter rigid symmetries, untune all harmonies.

Not as a way of saying there is no God but as a way of finding transcendence in immanence, of finding spirit in flesh, in the material world, in its paradox, and its brokenness. His Caliban says to the Sea Nymph “O my brackish Ananai”

Let us breed a continent of creatures, neither earth
nor water like you and me but both and thus blessedly impure

In addition to his surprising and memorable visual and sonic imagery, I admire the way the poems explode and expand my frames of reference – literary, artistic, linguistic, geographical. These poems invite me in and also outward. If Menes has made his own connections (out of which these poems surely arise), we are invited – they are open enough to allow us – to make our own and different connections as readers. For example, his poem “Letter to José Lezama Lima” begins

O apostle of our tropical baroque, so lush your verse,
so snarled, crusted, curdled, mottled & spirally—
it was you who taught me that excess (the more extravagant
the holier) is our island’s sacrament & the creed
of spareness just a heresy bound to the northern mind.
Ay Lezama mío, poeta de poetas, I heard your call …

How could I not think of Góngora, Spanish baroque “poeta de poetas,” and of Cuban poet Lezama Lima’s neo-baroque “Una oscura pradera me convida” [A Dark Meadow Invites Me], which then leads me to Robert Duncan’s “Often I Am Permitted to Return to a Meadow,” where for Duncan the meadow is “a place of first permission.” The poems give us wide permission as readers, encouraging the kind of transgressive, celebratory and yet serious associative connection-making which, for me, is one of the deepest pleasures of art and literature in general, and poetry in particular.

Leveraging the irreverent and transgressive qualities of the work and lives of the poets, painters, and saints he taps as wellsprings – and through close attention to the material qualities of language itself, its soundscape, and the destabilizing effect of multiple languages, these poems urge us into the world Menes sees as “graced by disorder” And what does he mean, finally, by grace?

Grace is asymmetric, parabolic, skewed to love,
Immanent and absolute, but also unpredictable
As quantum particles, both here and there,
Both full and empty, so it might arrive
Inopportunely and thus slip under hope,
Upsetting the earnest prayer, teasing our faith,
Like some rain bands, copious cumuli,
That appear astray, unbidden, in stagnant skies
To drench at last the drought-scourged earth.

Throughout the book, poem after poem douses for that water – salty and sweet, brackish – which is both nowhere and everywhere around us. Halleluja. 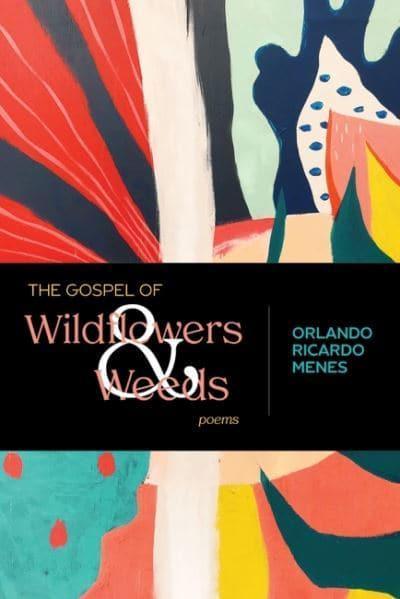 The Gospel of Wildflowers & Weeds
by Orlando Ricardo Menes
The University of New Mexico Press (Albuquerque), 2022

When The Poet is a Master of Multiple Arts: Michelle Whittaker and Aaron Caycedo-Kimura; Interviews with Frances Richey

By Delbos Stephan in Issue #134 October 2022, Essays and Comment