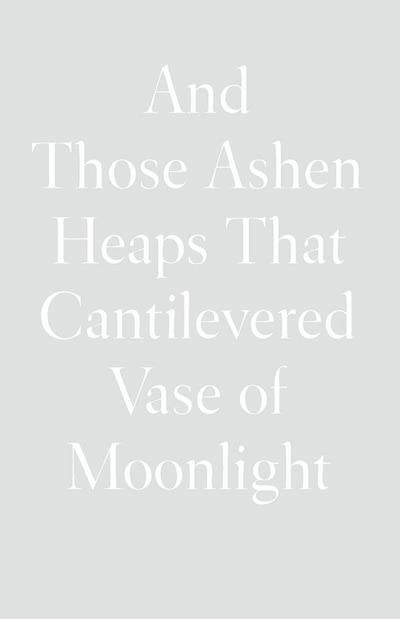 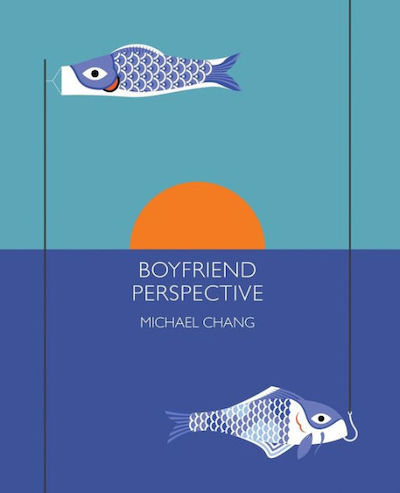 I’m a fan of well-printed books. Handmade. Letter press. If it’s going to be print on demand rather than oﬀset, I pray to the book gods that the diﬀerence in quality won’t be glaringly apparent, don’t you? Brain research has shown that reading oﬀ the page is diﬀerent than reading oﬀ a screen (eBook, PDFs, etc); if you printed out this review and read the printout, you’d be firing up other parts of your neural network in the same way some Old School poets prefer to scratch out their poems on writing pads rather than compose via keyboard. All this to say: I love reading books of poems that change the way I think about the experience of reading itself.

Both of the books I want to discuss today are larger than digest sized. Lynn Xu’s And Those Ashen Heaps That Cantilevered Vase of Moonlight clocks in at 6.5” x 9.5” just shy of page size. Her line lengths do not require wide pages the way Leaves of Grass did. What’s luxurious about this production are the varying font sizes for starters, the design of the thing, the first half of the book largely made of white text on black pages, most of the pages just holding two lines in their centers—one line in English and the other in Chinese. While the English appears above and the Chinese below, I wouldn’t necessarily call the Chinese a translation of the English, not really. What I experience is a symbiotic dance of mother tongues. A language lesson. A lesson about languages in conversation on the page. What if you can’t read Chinese? Get cracking while Xu tosses in a little Spanish and a little French at the tail end of the book’s first half to further tease our palettes.

This book-length poem not only honors the Mother but the Great Mother. If we think of the book as a kind of moonlit vase able to hold ashen heaps, we might consider Xu’s project as cosmic, elegiac, cyclic. A project bound by time and space between its printed covers, yet somehow unbound by conventions on the page. Splurge if you want on the Limited-Edition hardcover (I did!) and rejoice that an eBook version is not an option. What you will experience is entering a ritual space full of sung hosannahs, an initiatory countdown as we pass through those Janus gates of birth and death, death and birth. Her diction can be as earthy as a “moral rectum” and as heavenly as her “masters / endlessly / generating: / paso / umbilical / paso / nada / tele- / pathos: passage / from cadaver / to corolla.” Get your hands on this baby now who knows how to give suck!

Do you need a command of Chinese to be an ideal reader for this latest outing by Lynn Xu? I do believe so. You also need a command of English employed in poetry spanning the gamut from traditional to radical forms. And who might your poetic mother(s) be is a question that keeps on getting begged, not only in And Those Ashen Heaps That Cantilevered Vase of Moonlight but in Michael Chang’s Boyfriend Experience which clocks in at 7.5” X 9.25” (if size matters to you at all), Really Serious Literature also a publisher out of Seattle.

Michael Chang’s capacious lines need lots of room to run. Our girl can throw a shit ton of shade one moment (“I tell myself performative allyship is better than no allyship, but it still maintains the odor & rot of a damp cloth”) then quickly cantilever over to unsettling hilarity (“Weird when big dudes bottom / iz like putting toothpaste back in the tube / I don’t know how to love something so big.”) His rapid-fire wit hits hard and fast as he leaps between American and Chinese (Taiwanese) idioms, often within the space of a single poem (from “Let’s get down to brass tacks” to “rén shēng baíh fēn”). In between, we find such out-of-the-box observations like “Tell it slant like my eyes”; “50% of Roger Federer’s name is er”; “Snickers have a dick vein.” Also, when was the last time you saw a quote by Yeats juxtaposed with a quote by Tupac juxtaposed with a quip by Michael Chang himself? You get all of this (and more!) in his romp of a poem called “Spooning Is Stupid.”

Boyfriend Perspective is a book of astonishments. Our girl demands that we scoot over and make room for her at Parnassus’ miles-long banquet table. He reminds us that “When an Azn editor accepts one of my poems, a fellow poet says: ‘You guys can be poo poo platter together.’” He reminds us in another poem how “White readers love Minority writers. If anything the danger lies in writing too white—white readers will demand more exotic, more ethnic material” yet isn’t it “So funny how a R*th L*lly finalist repeatedly and snidely referred to my language in my poetry and asked me to take it out???? In case it wasn’t clear, she was talking abt Chinese.” Chang will not fit his tongue into your Procrustean bed. In a world where “you wish to return as a male model’s favorite cat / writing is diﬃcult & stressful but if you do it successfully, you can still be poor! / poets rank slightly below raccoons / i am immigrant i self publish lichen / you like large boys a queer person / you should write a memoir you have seen some shit.” And our poet readily admits, “I have a joke abt submissions but I save it for my friends.” Submissive she is not! Tà chéng hūi wóh dōu rèn de níh

(For more information on Timothy Liu, see his website).

Joan Houlihan, interview and poems from "It Isn't a Ghost if it Lives in Your Chest" with Ann van Buren

Timothy Liu
It's not the smoking I miss