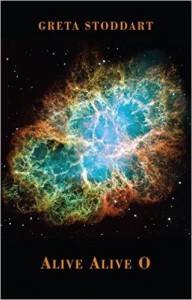 Greta Stoddart’s third poetry collection, Alive Alive O, takes its epigraph from the final verse of the famous Irish folk song “Molly Malone.” Regarded by many to be the quintessential anthem of Dublin—replete with its own statue on Grafton Street, no less—“Molly Malone” tells the sad tale of a maiden fishmonger (and part-time prostitute, depending on which version you sing at the pub) who dies of fever. Her specter endures and carries on her trade: “And her ghost wheels her barrow/Through streets broad and narrow/Crying cockles and mussels, alive, alive-O!” Molly Malone’s deceptively simple narrative is rife with dichotomies: her one profession is earnest while the other is taboo, in death she appears ever more vehement about hawking her wares, and her tragic illness imbues her with a wistful dignity she never had as a faceless digit in the city’s teeming proletariat. “Molly Malone” is a common ballad of grief, simultaneously familiar and strange, that acknowledges the tedium of life and the omnipresence of the dead in our hearts. These centuries-old sentiments appropriately foreshadow Stoddart’s distinct and well-wrought elegies, which marvel at death as much as they grieve it. Alive Alive O is a moving achievement that finds Stoddart approaching mastery at mid-career with emotionally complex, structurally varied poems grounded in the stoic truths of rural life.

Alive Alive O, much to its credit, rejects the tidy binaries of ache and closure that so often define elegiac books. “The Curtain,” its opening poem, employs Shakespeare’s metaphor for life as a grand performance. What instantly ensnares the reader, however, is Stoddard’s tactile fixation on the liminal space between the spotlight and darkness, where our loved ones, once their parts end, must transition back into the cosmic mystery:

No tears then. Just one of us to hold

aside the curtain – here we are, there you go –

before letting it slump majestically back

to that oddly satisfying inch above the boards

in which we glimpse a shadowy shuffling dark.

who’s to say they won’t already be

in their dressing room, peeling off the layers,

wiping away that face we have loved,

unbecoming themselves to step out

into the pull and stream of the night crowds.

In these closing lines, Stoddard acknowledges fascination and transcendence, which are, perhaps, the most private aspects of death we so rarely discuss. Her abbreviation of the poem’s last stanza to a couplet heightens its abrupt image of a life dissolving into memory and spiritual essence. Another poem, the almost-fable pseudo-sonnet “Fallacy,” hazily outlines the maturation of a girl from crib to classroom, documenting her instinctual titillation at death’s proximity in the smell of “the dying in the black wet leaves” and “the raindrop, the wind’s blunt ecstasy,/the snow that comes to grant every thing/its silent wish.” Stoddard’s short poems are punchy and taut, as we see in “Frame,” which, like a Flemish still life, feels otherworldly due to the meticulous arrangement of details and the implied absences between them. The poem follows in its entirety:

We sit around a bed inside a room.

The corpse is laid out like a kind of light.

It’s the only thing we can bear to look at.

out of here and carrying on –

When all of a sudden last night appears:

my boys stripped to their waists, wrestling,

the shine of sweat on their faces.

glances off many-angled now, its light

comes from inside and very far away.

The fluidity of Alive Alive O derives not only from Stoddart’s organic sequencing, but also from her dexterity to command long and short poems with equal grace. “Lifeguard,” the book’s most ambitious poem, fills three pages and echoes Philip Larkin in its oscillations between indifference and compassion for a local youth who died in a motorcycle accident. “House and Train,” another long poem, employs windows, the play of light, and our subjective awareness of time to explore how domestic comforts cocoon us from existential dread. Amid such sustained pieces, the short poems remain stunning for their compression and implication. At a mere fourteen lines, “Daughter” juxtaposes a child’s death resulting from medical malpractice with Jesus’s climatic arrest in the gospel story. The result is nothing short of riveting:

So they were called to come in and watch

Her moony thorax slapped up on the lightbox

Show how a small shadowy gathering

Had appeared in the dim garden of her lungs.

Home, and sitting at the long wooden table

Where she’d lie to receive their daily trembling

Dose of herapin, where now lay a Bible,

He said I want to be able to forgive them.

Gethsemane. Moonlight. And the mob

— armed to the hilt, alert to the kiss —

who knew only what they had to do

and never mind who suffered

for how long or in how many ways,

came and took the beloved child away.

In an age when many poets mine the complexities of urban life and globalization for their subject matter, rural landscapes dominate Stoddart’s poems.  “Wild Pear,” the book’s only concrete (or shape) poem, morphs from a Platonic ode to a meditation on a family’s disbelief that one solitary pear survived an entire year, turning “more stone than fruit/form than flesh” before finally becoming a “single/hard unadulterate/tear.” Despite its “saltsmoke and weedcrackle” scene of a seaside pyre, the sensual, vibrant imagery in “Fire on the beach” lead the poem’s congregated mourners “back up to the car/leaving behind us the hiss and grate/of the sea on the stones.” Echoes of Ted Hughes resonate “Mud and sun and stone and rain,” a poem visceral and unwavering in its acknowledgement of nature’s grand amorality. Its speaker confronts her inability to comfort a dying sheep and must finally leave it to endure its misery alone. While readers know the following dawn will yield a grim scene, this anticipation still fails to prepare us for the poem’s savage ending, which centers on the primordial hunger that sustains all life:

Next morning I saw her laid-down shape.

I could see she was done with

her slow dispassionate cleave from the world.

Now she was safe all right, for a long

night had passed and bunches of bloody fleece

had bloomed under a fat harvest moon

where her neck had been half chewed off.

Only two of Stoddart’s poems lack development and fail to hold the reader’s attention. At first blush, “Voicemail” explores a dramatic situation, wherein the speaker leaves a phone message for a deceased loved one. Rather than the message serving as a gesture of surrender or closure in the wake of death, however, the poem’s narrative remains muddled by its opening lines, rendering the entire poem an exercise in confusion: “And as I left the message/I realized that you/were probably already/dead….” The poem never addresses an obvious, crippling omission: what series of events led the speaker to doubt whether someone she loves is still alive, and why in such circumstances would she leave a phone message instead of, say, driving to that person’s house, or the hospital, or at the very least calling an intermediary? “Letter from Sido” also disappoints. A three-page epistolary poem in the voice of the French Nobel laureate Colette, the poem presents many imaginary particulars, but ultimately lacks focus and trajectory.

These shortcomings are easy to forgive given the assurance and force of Stoddart’s best poems. Despite its elegiac arc, Alive Alive O refuses to wallow in bleakness. If the highest poetic calling is to tackle the overwhelming enormity of life and death, Stoddart honors the ancient pulse of our art, and in doing so proves her mettle, wisdom, and craft. Such virtues should earn her third book acclaim in England and beyond.

“If you slit your wrists while winking,” New Zealander Hera Lindsay Bird asks in her debut collection’s opening poem, “does…

Grief and irreverence rarely align in poetry. We have our wistful poets and we have our witty poets, conventional wisdom…

With the sensuality of Carl Philips and the edginess of Wanda Coleman, Tommye Blount’s debut chapbook What Are We Not…