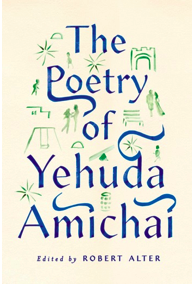 When Yehuda Amichai died in 2000, the international literary community mourned the passing of Israel’s greatest post-war poet. For those of us reading him for the first time, The Poetry of Yehuda Amichai encompasses an exceptional career. Spanning five decades, Farrar, Straus and Giroux’s retrospective gathers twelve previous books and represents the efforts of thirteen Hebrew translators. Though his oeuvre is dense and daunting, Amichai accomplishes a feat only two other poets achieved in the 20th century. Like Pablo Neruda and Seamus Heaney, Amichai wrote unapologetically about his private life, his native landscape, and his national identity, yet his poems speak across the boundaries of language and culture to express a remarkable universality. The Poetry of Yehuda Amichai presents, for the first time in English, the true scope and enormity of his poetic talents, and simultaneously captures the struggle, vivaciousness, and perseverance that defined Israeli life in the previous century.

Amichai’s earliest poems are psalmic entreaties about the fate of Israel and the Jewish diaspora, notable for their ability to balance pride and political criticism. Indeed, themes of identity recur throughout each of Amichai’s books. As editor Robert Alter notes in his introduction, “in the Israeli War of Independence of 1948-49, he saw frontline action (as he would again in 1956) in the Negev, and thought it would be wrong to say that he suffered from posttraumatic stress, the experience certainly haunted him for the rest of his life.” Poems centered on soldiering and its duty and fear dominate Now and in Other Days, Amichai’s debut collection from 1955. In the best of these, including “Autobiography in the Year 1952,” and “Two Poems About the First Battles,” we confront the perpetual tension and uneasiness of a young man—and indeed a young country—struggling to secure a hopeful fate even though threats of violence remain the daily reality. In the closing stanza of “My Non-Credo,” Amichai articulates his growing agnosticism, which alienates him from the very cultural values he loves and defends:

I still show kindness to the god of my childhood.

In my life’s weariness I have turned into

a speech impediment: it is hard

for Him to praise His world in me.

Another poem from the 1960s reveals Amichai’s political awakening, which imparts his most admirable talent: he unifies patriotism with contempt for human divisiveness in a single stance. “Jerusalem” follows below in its entirety:

On a roof in the Old City

the white sheet of a woman who is my enemy,

the towel of a man who is my enemy,

to wipe off the sweat of his brow.

In the sky of the Old City

At the other end of the string,

because of the wall.

We have put up many flags,

they have put up many flags.

To make us think that they are happy.

To make them think that we’re happy.

Despite his frequent examinations of Israel’s people and culture, Amichai is perhaps most compelling as a poet of eros. Page after page, his poems praise the pleasures of the flesh, the intimacy of romantic union, and the tenderness that lingers even when love fails. “I Waited for My Girl and Her Steps Were Not There,” “In the Middle of This Century,” and the long sequence “Poems of Akhziv” are just a few of the many love poems that show Amichai’s swooning heart and mournful acknowledgment of human frailty. “Red Bride,” a haunting ballad from Now in the Uproar: Poems, 1963-1968 stands out for its vivid—if foreboding—imagery and for the terse vehemence of its jilted speaker’s wrath. Much like the endless permutations of the rock standard “Hey Joe,” the poem is an affirmation of male power and violence; and yet, like the bewildered chorus at the end of Sophocles’ Oedipus the King, one is nonetheless compelled to gaze into the face of terror:

Here are the hills of Moab,

Here the hills of Edom lie before me.

At the gallows tree.

I’ll tie you up

With your own red hair.

Add you to the reckoning

of the End of Days.

Your belly’s an open gash

Is dust and ash.

Down we went to the walnut grove,

On a hypnotized night:

At his weakest, Amichai simply overwrites, abandoning the concision and focus that make so many of his poems compelling and lush. This weakness manifests when his usual skill with liturgical repetition devolves into flat redundancy. Take, for example, the opening stanza to “If I Forget Thee, Jerusalem”:

If I forget thee, Jerusalem,

Then let my right be forgotten,

Let my right be forgotten, and my left remember.

Let my left remember, and your right close

And your mouth open near the gate.

Amichai squanders his opening line, which is identical to the poem’s title. Lines 2, 3, and 4 restate each other and cry out for more editorial control. Moreover, what exactly does Amichai mean by ‘left’ and ‘right’ anyway? A stronger version of “If I Forget Thee, Jerusalem,” may have simply begun with line 5, which is where the poem finds its metaphorical focus. Similarly, the poems included from Amichai’s final book, 1998’s Open Closed Open, show a marked decline in quality. Comprised mostly of discursive, multi-part sequences, these last works veer toward prose and ultimately seem more like journaling exercises than polished verse. Poems such as “Conferences, Conferences: Malignant Words, Benign Speech,” and “Jerusalem, Jerusalem, Why Jerusalem?” are simply uninspired. Here is the entire cringe-worthy third section of “Names, Names, in Other Days and in Our Time,” a six-page, sixteen-part sequence that is, as one might infer from the title, the loosest of lyrical meditations:

My name is Yehuda, and it comes from

the storehouse of names. The penis is mine,

the erection is mine, but the sperm comes from the semen-silo

that has no end, that returns through my offspring

to the Great Sea.

Though Amichai’s final years represent an artistic waning, no poet since Neruda has wrought such masterful odes, prayers, and invectives from the plain language of the field and street corner to justly earn a global reputation. Amichai’s plainspoken lyricism maintains its tone and fluidity in English, which is a testament to editor Robert Alter and his team of translators. Marked by his search for self, sensuality, and the meaning of nationhood as a German-born Israeli, Amichai’s poems transcend the circumstances of his own life since they distill our gloomiest failures and grandest yearnings as a species. As he writes at the end of “Jews in the Land of Israel,” “Spilled blood is not the roots of trees/but it’s the closest thing to roots/we have.” The Poetry of Yehuda Amichai is not merely a chronicle of one poet’s robust legacy, but an impeccable testament to scholarship and the elusive art of translation.

Christopher DeWeese: The Father of the Arrow Is the Thought & Amelia Martens: The Spoons in the Grass Are There to Dig a Moat

Paul Klee, one of the most gifted and prolific visual artists of the early twentieth century, defies easy categorization. A…

According to a recent New York Times article, drug overdoses are now the leading cause of death for Americans under…