Chronicler of a Blue Planet: An audio interview with Ranjit Hoskote by Leeya Mehta

Ranjit Hoskote has lived, for most of his life, in Bombay, on the shores of the Arabian Sea. He has been fascinated, ever since he was a child, by the presence of water, with its transcultural histories and legends retold in several languages. In his mind, as a child, the Biblical Jonah and Herman Melville’s Ahab fused into one, a figure of dissidence and restless exploration. As a teenager, he was inspired by the work of the explorers Thor Heyerdahl and Tim Severin. During the last twenty years, he has drawn – as a cultural historian, in books such as Confluences, co-authored with Ilija Trojanow – on the legacy of pre- and non-Columbian cartographers and navigators like al-Idrissi, Piri Reis, and Zheng He.

For many years, while travelling or during periods of residence overseas– beginning as a student in Frankfurt for a summer – Hoskote would orient himself by reference to local water bodies: rivers, lakes, canals, the edge of the ocean. Despite being a citizen of one of the world’s most populous metropolitan hubs, Hoskote prefers to think of himself as a nature poet, concerned with the cycles of the natural world, the interrelationship between species, the elemental continuities and the disruptions visited upon them by humankind in its insatiable rapacity, ultimately destructive both of its habitat, its fellow tenants of the planet, and itself. 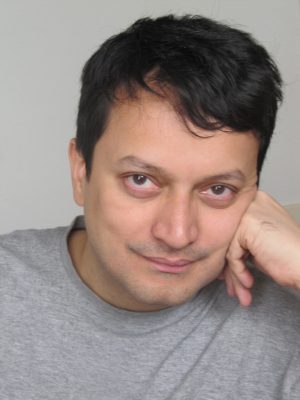 These concerns inform Hoskote’s seven collections of poetry, including Vanishing Acts: New & Selected Poems (Penguin, 2006), Central Time (Penguin/ Viking, 2014), Jonahwhale (Penguin/ Hamish Hamilton, 2018), and The Atlas of Lost Beliefs (Arc, 2020). Hoskote’s translation of a 14th-century Kashmiri woman mystic has appeared as I, Lalla: The Poems of Lal Ded (Penguin Classics, 2011). Hoskote is also a curator and art critic. He curated India’s first-ever national pavilion at the Venice Biennale (2011) and was co-curator of the 7th Gwangju Biennale (2008). Among his many curatorial projects, also, are three transhistorical and trans-genre exhibitions for the Serendipity Arts Festival: Terra Cognita? (2016, an inquiry into printing and modernity in South Asia), Anti-Memoirs (2017, a reflection on loci, languages, and landscapes), and The Sacred Everyday (2018, an extensive survey of inventive, even transgressive syncretism in popular South Asian religious imagery, subtitled Embracing the Risk of Difference).

The Map Seller
for Nikola Madzirov

The roof’s dripping with pigeons and I’ve just escaped
the worst of the sun, strapped on my scuffed leather bag,
and in a moment – this shade’s delicious – and before
the pedlars start shouting, Say your piece! Say your piece!
I’ll start calling out names and pulling countries from it:
big countries, small countries, countries broken in two,
countries the size of handkerchiefs and countries engorged
with other countries, buffer zones jostled by failed states,
island republics sinking by degrees. Even nuclear powers
that started as papaya plots or guano archipelagos.
Whatever you like, I’ve got a map that looks like it –
and you can have any piece of my flaking jigsaw atlas,
if only I could reach you across this accordion sky
that’s billowed open to rain on all the hats I wear:
tribune of nowhere, midnight’s newscaster,
out-of-work weatherman, all-terrain refugee.
And across this trench that a JCB’s dug along my street:
tomorrow’s avenue, today’s wide sludge grave.

a perch to gather
the rain’s drumbeats
to begin again

marking the quay
from which the sun boat sails

to begin again
to lose your way

Two white birds perched on a branch,
one killed by a hunter’s arrow.
The first poem written in its blood:
the mourning sage’s sudden curse
falls on the hunter’s ear as verse.

Prisoner on the island of his suspicions,
alone under his white silk canopy,
he murmurs the chants that his ageing priests
heap on the fire sacrifice. Then from nowhere,
two boys’ voices, high flutes above the drone.
Dropped masks, startled faces. The boys sing

of the golden deer in the forest, the princess
carried off by the demon chief, the war, the siege,
the giant red monkey cartwheeling across the sky
and burning the island fortress. When the war ends,
the prince fixes his wife’s fourteen-year wait
with a cold stare and an ordeal by fire.
The fire plays honest witness.

But the prince cannot bridge
a distance greater than the stormy sea.
Doubt again for him, again exile for her,
love twisted and beaten on a washerman’s stone.
At last she will have had enough of his tests:
she will ask the furrowed earth to swallow her.
He stands up shaking, his eyes opened wide
as his children sing to the king his own story.

Battle’s end. The mare sags through the rain.
The emperor weighs nothing in the saddle.
The clear, unimpeded thought
is his torch and blade:
he scorches a way
through the forest
of corpses.

Leeya Mehta
Once she crosses the threshold