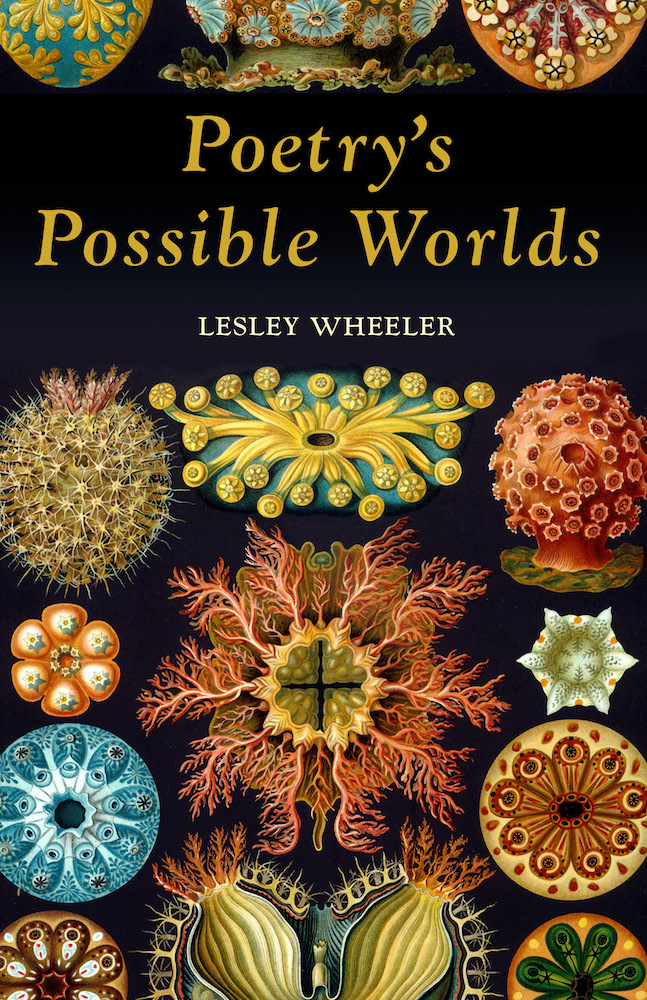 In poetry and prose, Lesley Wheeler contends, “the ratio of sound to sense is different.” She is right, of course, but I would add a caveat: often, in a poet’s prose, you can feel the tug of sound–of tap-dance and assonance–on sense. Certainly, you can feel that pull in Poetry’s Possible Worlds; the sense in Wheeler’s prose skews, a bit, toward singing. Which is to say that the tug-of-war Wheeler performs, as a poet and scholar, makes for gorgeous reading: methodical, musical, revealing.

But the contested ratio of sense and sound in this book is one tug-of-war among many.

To be clear, in some of the contests she enters, Wheeler holds just one end of the rope. Poetry’s Possible Worlds, for instance, digs its heels in with the purpose of reclaiming for poetry what critics call “literary transportation,” the absorption of a reader in a realm made of words. In studying this phenomenon, Wheeler asserts, “researchers tend to ignore lyric poetry […] or to argue that its terseness and formal qualities short-circuit total engagement. This book began when I realized how intensely I disagreed with that widespread assumption.” Indeed, Wheeler takes the critics who ignored or refute poetry’s capacity to absorb readers to task. She even nicks two-thirds of her title from a couple of them (Marie-Laure Ryan’s Possible Worlds, Artificial Intelligence, and Narrative Theory and Lubomír Doležel’s Heterocosmica: Fiction and Possible Worlds).

Poetry’s Possible Worlds, then, insists that it is not just long, prose narratives that carry readers to new places; lyric poems do, too. The book’s vindication for that claim, laid out in its introduction, takes shape over a dozen case studies. Each chapter begins with a poem, and Wheeler details its machinery, its devices. She examines the poem as a vessel built to hold a reader, to “entrain” them, to move them. But she recounts, as well, her particular journeys through these twelve pieces, never concealing the idiosyncrasies of her travels inside the verses’ worlds. She is forthright about where, in her own immediate story, they pick her up. And she is forthright about the hologramatic way their landscapes hover over, then displace, then fade from her “real,” immediate surroundings.

Consequently, this book also strums the taut opposition between different ways of reading; it enacts the tug-of-war between the schools of New Criticism and Reader Response. And, wonderfully, Wheeler heaves for both sides.

Sometimes she practices close reading with a New Critic’s scrupulous focus on the text itself. For instance, in analyzing Jan Beatty’s “Red Sugar,” the scholar notes the “oddly placed slashes [that] suggest alternative line breaks, as if another poem lives inside of the poem.” Of Natalie Diaz’s “My Brother, My Wound,” she observes, “‘He’ and ‘his’ occur most frequently (sixteen times); three instances of ‘they’ and ‘their’ also refer to her brother, disassembled into bulls and small red eyes. The word ‘him’ never appears because the brother is an agent of destruction, not its object.” This meticulous attention to form and syntax honors the poems’ integrity. For Wheeler, after all, a poem’s craftedness–the world built inside it before the reader arrives–matters greatly to what it means. But not by itself.

What the reader imports–the cargo they carry into the poem–matters to a poem’s meaning, too. So, in her chapter on Maria Hummel’s “The Unicorn,” Wheeler attends to the fantastic world of the poem, which forefronts “a father’s unapologetic willingness to behave terribly, to carry a beautiful creature into a hospital with the sole purpose of killing it” in a desperate bid to cure his child’s illness. But she swivels between the scene of the poem and her own father’s reckless, selfish charm, recounting in part the damage to his family.

My stock mental image for ‘son’ was my high school freshman who lived in his gray hoodie.
And it’s a short step from my-son-is-white to white-is-the-normal-color-for-sons. I might be
failing O’Neil’s poem by admitting these responses, but they would have shaped a more
objectively framed interpretation even if I had kept them to myself.

Not only does the scholar not stick to the evidence available in the text itself; she points up the way in which, even in “objectively framed interpretation,” the reader never enters the poem empty or pure. Alongside the prowess of Wheeler’s close reading, then, we find her towing the poem’s meaning some distance toward Reader Response, as well. Put simply, Poetry’s Possible Worlds urges us to prize the reader who climbs aboard a lyric not as a cipher, but as a self.

Effect and affect, then, both matter to Wheeler’s thinking about “literary transportation.” In other words, how the author’s words work and how the reader’s mind works both matter when it comes to immersion in (and emergence from) a poem’s world. Furthermore, it is the author’s affect behind the poem’s effects; art’s task is to fit formless things (e.g., feeling) into forms. Wheeler quotes Sven Birkerts’s notion that the feat of literary art is to bring together “adjacent souls with permeable boundaries.” That sort of transport–into such intimate nearness with a truth from outside one’s self–hints at transcendence, Wheeler argues. And it means that a poem is “a rehearsal for […] comprehension.”

“A rehearsal for […] comprehension”: that strikes me as precisely the wonder that can take place inside a poem’s possible world. (Just as, perhaps, narrative prose lends itself to a rehearsal for compassion.) None of this means, naturally, that we all find comprehension (or compassion) in the same places. In fact, I find it difficult to follow Wheeler into some of these poems’ worlds, whether that’s because the poems can’t manage to transport me or because I’m not limber enough to hop aboard. But that doesn’t diminish the writer’s account of her travels. To watch her traverse these twelve worlds, even from a distance, is instructive.

And to be clear: Poetry’s Possible Worlds isn’t an itinerary or an “all-aboard.” Rather, this book is a voucher for the transport poetry can bring about, and Wheeler knows that the poems through which you “step into a world suffused with meaning” will depend on your scars, on your family, on your loves and worries. She also knows that, whatever poems transport you, you will not be able to stay there, to live inside a merely possible world. What’s more, she grants that “the positive uncertainty of poetry is hard to reconcile with the negative uncertainty of living.”

As for this tension–between “the positive uncertainty of poetry” and “the negative uncertainty of living”–I find it the most compelling bout of tug-of-war in the whole book. Not because Wheeler feels the pull of both uncertain worlds (although she does). No, the tension between the possible world of the poem and the immediate world of the reader stands out to me because of the jolt that travels the rope on which both realms pull.

That jolt is change. It is poetry’s power to alter the day-to-day, which, obviously, we inhabit most of the time.

Of any chapter in Poetry’s Possible Worlds, the chapter devoted to Robert Sullivan’s “Ahi Kā–The House of Ngā Puhi” most directly announces verse’s potential to vibrate in mundane reality. Wheeler finishes the chapter with a proclamation: “It isn’t enough to spend time in poetry’s alternate worlds. Other words must be spoken in other fora.” She continues, “Political activism by conventional means, however, isn’t enough, either. I’m not sure anyone can make a persuasive claim to being fully here if they won’t admit the flicker of forever light.” And that “flicker of forever light” is a signal that hails, for Wheeler, only from poetry’s possible worlds.

In the end, then, this is the most powerful argument Wheeler forwards: for us to speak here, in this forum, in “the negative uncertainty of living,” we need what “the positive uncertainty of poetry” lends us. We need, in other words, a “rehears[ed …] comprehension” fit to travel, like lightning, down the taut line from the lyric to the prosaic world.

Fragments of The Sacrificial World

Genesis and The Anonymous City

At the perennial exchange

Jane Zwart
At the perennial exchange, you will swap half a hosta