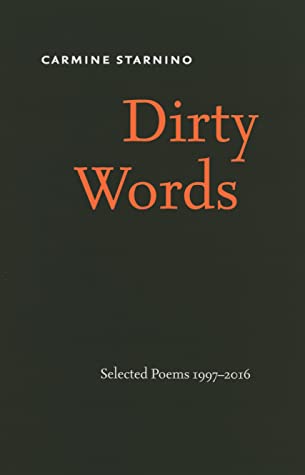 For this month’s installment, I thought I’d wander a little farther afield—a little farther north—than our readers, at least Plume’s American readers, might be accustomed, with a review of Carmine Starnino’s Dirty Words, a volume of poems selected from the five volumes he published between 1997 and 2016. Now, as a Toronto Maple Leafs fan, it’s difficult to praise the work of a poet who lives in Montreal, and who is, therefore, probably a fan of the Leafs’ chief rivals, the Canadiens (Les Habitants)—why mention hockey here? It’s a rivalry about as old as hockey, but the dressing room of the Habs is adorned with a motto taken from the poem “In Flanders Fields,” by John McCrae. If that seems too tenuous a connection, consider Gordie Howe’s famous adage: “Every hockey player is bilingual: they know English and profanity.” The title poem of Starnino’s collection collects a few words of the latter language in a short praise poem, a poem that’s both funny and beautiful (“Porca madonna, / for example sounds mouldered and sour; effluvia / of ripe figs, split by their fall…”). Yet it’s also characteristic of Starnino’s work throughout these five collections: poems in love with language and the vocabulary of whatever the subject might happen to be (money to rope knots to squash rackets), poems that are infused by a blue collar Italian-Canadian culture (and the poet’s Italian ancestry), and poems that are filled with humor and music (perhaps I should spell it “humour” for this particular review).

Starnino’s first two collections, The New World, and Credo, offer the reader snapshots of the thematic roads that his poems will follow across the next two decades: memory and family and domestic life, work—especially that of blue collar workers—and the landscapes of art and faith, the latter of which often intertwine in poems such as “Ex Voto,” a four-part sequence in A-B-A-B quatrains, which charts the miraculous rescues of children in response to the prayers of their parents, while leaving the reader wondering about the parents whose prayers weren’t answered—or were, perhaps, answered in the negative. Starnino’s love of language really shines in these poems, such as in “Cornage,” which offers us peculiarities in the form of odd words (“ezel, / cornage, buckram, waes hail, sillyebubbe…doeges-eage, horshwoil, necke-verse”), odder punishments—such as a ‘“philanthropic decapitation machine’”—and last minute reprieves, like the “eleventh century convict pardoned by a neck-verse,” and rituals to comfort the dead, such as the beer and bread left on a “sinne-eater’s” body for him to consume.  The poem is a love letter to language, and a tour-de-force that merrily skips across centuries of largely forgotten words, but also a wry reflection on the type of poem that attempts this: “If you alleged a poem “smelled of the lamp,” you meant / it was verbose, its word-whiff caused by too much / “burning of the midnight oil.”

With English Subtitles includes a delightful sonnet sequence, “Worst Case Scenario Poems,” in which a narrator offers instructions for a variety of tricky situations, such as climbing out of a well, finding water on a deserted island, surviving a volcanic eruption, etc. “On the Obsolescence of Caphone” charts the disappearance of a variety of words and everyday insults, beginning with caphone, words “tough-vowelled and fierce / for the sheetrock they shoveled, and the steel / they bolted with a ratatatatatat, and the bricks // they troweled with a one-on-two-bend-scoop- / spread-tap-settle, and the sledges they whanged! on iron…mouths awakened, / mouths quickened by the volatile, unprissy, / impurifying syllables of gabbadosta or scimunito / or futtiti…” The poem is a later, longer version of “Dirty Words,” yet with a far larger, more ambitious scope, and a distinct setting with memorable characters like Uncle Louie, a paean for workaday turns of phrases and curses (somewhat analogous to the effect that words like Anahorish had upon Seamus Heaney’s imagination and verse).  As a book, With English Subtitles probably offers the widest tonal range, as the “How To” poems and “Obsolescence” and the giddy and joyous “The Last Days” (though it ends on a somber note) gives way to “Yukon Postcards,” a quieter love poem in a dozen parts that is centered upon lyric descriptions of the local landscape. The poem is distinctive within Starnino’s oeuvre, an alien landscape that is suffused with the presence of the speaker’s absent beloved, a landscape described with a wider variety of verbs and Celan-like compound adjectives and nouns than have previously been encountered in his work: “winterward,” “rust-frail,” “frost-charred,” “sea-susurrus,” “blue-bugle.” The music of the poem is insistent, and as unrelenting as the speaker’s loneliness: “Hedges flecked with frost-charred bric-a-brac / and russet-tinged curious of vegetation.” The speaker’s eye is restless, itinerant, and the speaker finally offers a reasoning of his incredibly detailed “postcards” in the final part: “If description is an act of love / I record for you fern-roofed orchestras / of white mountain heather….”

This Way Out and Leviathan conclude the book. The former is part travelogue, with the nine-part epistolary poem “Nine From Rome” one of the highlights of the book, as is the multi-part “The Strangest Things.,” yet I was most drawn to “Lucky Me,” a poem that explores the poet’s familial history, beginning early: “Luck, for me, began at three with the hands / my father drew behind him and, between them, / traded a quarter, a candy, a stick of Trident, / whatever he could fish up from his pockets / nights when I’d surprise him in the hallway / as stumbled in after nearly twenty-four hours / driving cab…” “Our Butcher” is a favo(u)rite as well. It begins with a wry pun, “I could bone up…” but after the reader finishes groaning at the pun, is treated to an incredibly lyric music that plays alongside some rather visceral images: “…hang by its hocks a rabbit shucked from the jacket / of its black-bristled fur and still talking in twitches.” “A chest’s cardiac leafage,” ox tongue and pig feet, sheep tripe and pig brain, “…carcasses unpacked like suitcases. Striated and plush, / crewelworked with fat and grosgrained with gristle…” And yet, as I mentioned, I kept returning To “Lucky Me,” for it points toward “Fashion Sense,” a poem that offers small glimpses of the poet’s father’s life, and finally, to “San Pellegrino,” a poem that opens with the news that the speaker’s father has stage IV lung cancer. The poem walks us through his father’s life, in what I feel is a risky form: long-limbed end-rhymed sestets and octets, each line finishing with an -er or -or rhyme or slant rhyme. The risk, of course, is that the end rhymes might end up undermining the seriousness of the subject matter, with a sing-song effect. Yet the length of the lines and the poet’s use of slant rhymes keeps this from happening, along with the specificity of the details of his father’s life. I felt like the effect, rather than undermining the poem’s gravitas, was, rather, a steady drumbeat that marched the poem along to what is the inevitable end: “Soon I’ll put a straw in water to slake his morphine thirst—a last pleasure. / Soon nights will turn bleaker, his wife and kids crying never ever after / in the small hour. But to say nothing lasts forever is not an answer. / I need something better, / and will sit here, staring deeper and farther / into this glass of water until that point becomes clearer.” The form of the final poem is one that takes the confidence and sharpness of a poet who has been honing his craft for most of his life. Dirty Words offers many pleasures across its five volumes, and it’s an event to witness the steady evolution of a poet with so fine an ear, but perhaps the most vivid is to experience the poet bring his considerable gifts to this poem that ends the collection.

In the opening poem of Nightingale, Paisley Rekdal writes, “The tree traffics / in a singular astonishment, its gold tongues…